The global large generators market is poised to expand at a CAGR of around 5% over the next ten years, with diesel generators remaining most sought-after. Use of large generators in power plants has also be rising across some regions.

The market is anticipated to create enormous incremental opportunities across developed as well as emerging economies, owing to increasing number of industries across the globe. In the case of large generators, engine, output power, and fuel system plays a key role.

These large generators have gained huge traction across the globe over the last few years, owing to their increasing efficiency and quick starting feature.

Proliferation of engines and other components has ushered the market into a new phase of business models, intense competition among local and global players, and increasing homogenous products.

Continuous innovation in product specifications of large generators has increased demand across the globe.

To cope with such industry opportunities, many large generator manufacturing companies are expected to witness a rise in sales and gain high-profit margins and operating margins over the forecast period.

The foremost objective of this new report by Fact.MR is to pitch insights on the market scenario, demand generators, and technological advancements in this space. The report provides a taxonomy elaborating on key market segments.

The report also outlines visionary insights on the dynamics of the market, including the drivers, restraints, opportunities, trends and pricing analysis, along with key success factors. Market trends have been tracked in 20+ high-growth countries across regions, with detailed large generator production analysis.

From 2016 to 2020, the market witnessed a low CAGR, with IT and oil & gas industries playing a major role in driving demand. Rising demand and production of high power large generators over the years has fortified prices. However, in FY2020, due to the COVID-19 pandemic, global market growth plunged at a negative CAGR of 6.9%.

Apart from this, decrease in demand from other categories such as petrochemical industries, etc., also contributed towards the sluggish CAGR. Demand over the long-term forecast period can be estimated by breaking the forecast timeline into three parts. 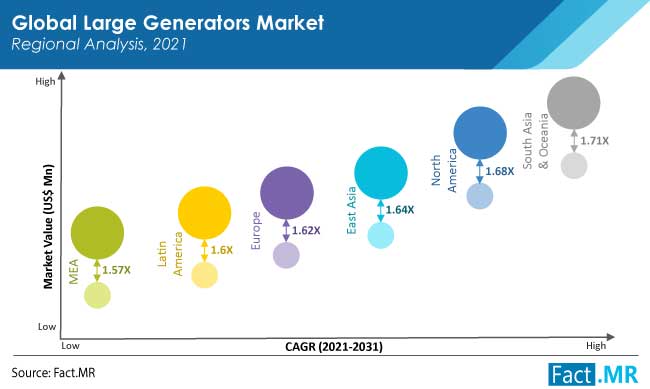 North America is the most prominent regional market for large generators, owing to more customers leaning towards electricity backup and growing apprehensions over downtimes. Moreover, amidst the outbreak of coronavirus, sales of large generators increased drastically in the North American region, in return, creating greater opportunities for manufacturers.

High usage of large generators in end-use industries such as oil & gas, marine, and power utility contributed immensely to market growth in the region. Also, with increasing awareness among end users, manufacturers are ramping up their production capacities to cater to rising demand.

In this report, Fact.MR projects that North America will hold over 30% value share of the global market by 2031.

Will Does China Continue Influencing the Market Structure and Product Pricing?

China, the world’s eminent market for large generators will continue to affect global prospects. China’s market remains extremely fragmented with a very large number of small players competing for a shrinking pie. Some manufacturers are aiming big and looking forward to compete in the global market.

China had a global market share of more than fifty percent in 2020, which is expected to rise further by 2031. This shows the country will further its position as a leading market for large generators. Impact of rising demand from China means that manufacturers and suppliers with local know-how and expertize will benefit in a big way.

Why is Demand for Large Generators Continuously Rising across the U.S.?

The U.S. market holds a majority of the market share in North America. This is due to the fact that this region has the presence of a majority of large generator manufacturers due to easy availability of raw materials and high-end infrastructure. Also, high number of end-use industries such as oil & gas, IT & telecom, etc., is driving demand from the consumption side.

Majority of prominent players in the country have been offering rental services for end users on a project base. Such a service is very profitable for end users, as they do not have to pay for the maintenance of these large generators. However, few third-party rental service providers are actively involved in purchasing high capacity large generators, and thus, are contributing towards the growing demand.

Why is the Marine Sector Expected to Drive Demand for Large Generators?

The global maritime industry is growing owing to myriad benefits such as less expenditure of transportation cost of products via sea/ocean routes. The vessels used to carry goods are incorporated with diesel large generators to power them. Diesel large generators are majorly used in sea vessels owing to high power generation capability with compact construction.

How are Data Centres Contributing Towards Growth of the Telecom & IT Industry in This Space?

In this data age, there are approximately seven billion Internet devices on the planet, and this number is growing rapidly. Many of these devices generate large volumes of data that must be gathered, routed, stored, analysed, and retrieved.

Manufacturers increasingly relying on data and data analytics to boost their operational performance, productivity, security, and economic efficiency, thanks to the Internet of Things (IoT) and Industry 4.0. In-house data processing, on the other hand, is becoming increasingly complex, time-consuming, and expensive. Large companies such as Cisco, are also considering shutting some of their own internal data centres.

Companies have been outsourcing their data-related activities to third-party providers specialized in data centre operations, such as colocation data centres. Colocation data centres are known for their physical space, cooling systems, servers, and connections to local communication networks. Companies such as Equinix, Compass Data Centres, and QTS, etc., provide such services.

Through establishing data centres, these companies are growing and expanding in different parts of the world to meet the growing demand for data solutions. Electronics and machinery such as cooling systems, storage devices, and servers are extensively installed at data centres.

As a result, these machines consume a large amount of power. Furthermore, data centres must operate without interruption 24x7, necessitating the use of large backup power generators. As a result, demand for high-capacity large generators is rising in tandem with the growth of data centres.

Large generator manufacturers have an opportunity to partner with data centres to supply high capacity large generators suitable for their operations, which will reflect in increased cash flow over the coming years, with increasing usage of large generators for the IT industry across the world.

Which Capacity of Large Generators is Expected to Remain Preferred?

How Has COVID-19 Impacted Sales of Large Generators?

COVID-19 has had a substantial negative impact on the global market for large generators from a business viewpoint. North America is one of the prominent regions for large generators, and is experiencing maximum downfall in demand as it has been largely affected by the pandemic. The market declined by 6.9% in 2020, which has degraded its value to a lower side.

There has been a breakdown in the market due to the imposition of lockdowns by governments across various regions, thereby halting trade and transportation from one region to another. Subsequently, this has unpleasantly impacted the sales of large generators across the world.

Prominent players depend on an amalgam of organic and inorganic strategies to deepen saturation across beneficial markets. Such strategies include partnerships, collaborations with key players, product launches, acquisitions, and consolidation of global and regional distribution networks.

These market is fragmented in terms of the supply pie. Key players such as Caterpillar, Mitsubishi Heavy Industries, Siemens, and ABB hold a majority of the market share and are key price controllers for large generators.

Similarly, recent improvements by companies manufacturing large generators have been trailed by the team at Fact.MR, which are accessible in the full report.

Large capacity generators market to register a CAGR of around 5% across the 2021-2031 assessment period. Higher penetration in the oil & gas sector will bolster demand over the coming years. Large generator sales in the automotive ind

North America is expected to hold a pivotal role driving demand for large generators from the industrial sector. Surge in demand from oil & gas and power utility industries is set to be observed across the regio