According to a new market report by Fact.MR, a market research and competitive intelligence provider, the world's total fish production reached 174 million metric tons in 2020, while the global aquaculture industry was valued at USS 180.2 billion, a figure that is anticipated to reach US$ 224.2 billion by 2022.

The UN's Food Agriculture Organization (FAO) also reports that the contribution of aquaculture to the global production of capture fisheries and aquaculture, combined, has risen continuously, and aquaculture continues to grow faster than other major food production sectors.

Day by day, live fish carrier utilization is on the rise across regions. This is due to the wide range of benefits of live fish carriers, such as transporting live fish to help big fishing companies and farmers sell their produce in a live condition and earn more. The live fish carrier market continues to evolve, expand, and develop around the world with an increase in demand for sea-megafood.

Between 2017 and 2021, the global live fish carrier market registered a CAGR of 1.2%, and according to this Fact.MR analysis, the market is projected to exhibit growth at 4.9% CAGR through 2032. 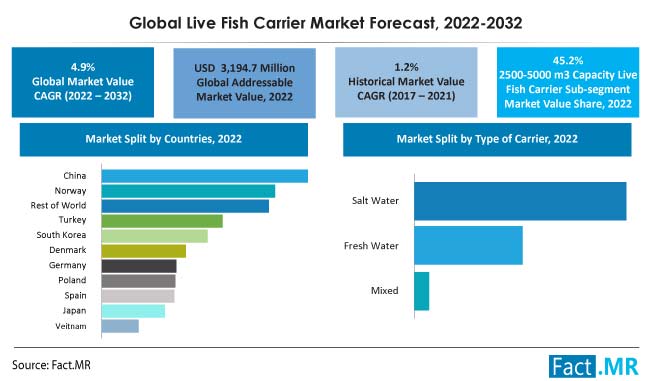 Market share analysis of live fish carriers based on carrier type and country is provided in a nutshell in the above image. Under the carrier type segment, salt water carriers dominated with 68.8% market share at the end of 2021.

What are the Key Trends in the Live Fish Carrier Market?

Oceans cover 70% of the Earth's surface but provide only 2% of the world's food supply. Until now, almost all attempts to establish marine aquaculture have been centered on state-jurisdictional coastal sea waters, which are normally within 3 to 12 nautical miles of the shore.

The open ocean, on the other hand, provides deeper water and stronger currents than coastal areas, allowing offshore aquaculture systems to produce more fish, thereby driving the fish carrier fleet market. This will also accelerate the demand for live fishes.

Offshore fishing systems are marine net pens that are placed out in the large open ocean far from the shoreline, making it a more environment-conscientious option. This adds to the expansion prospects of the live fish carrier industry.

Without the application of contemporary technologies, no industry in the world can grow steadily. Live fish carrier manufacturers are also aggressively using current technologies and are progressing at a faster rate.

In comparison to the automotive and aviation industries, the live fish carrier sector is still in its infancy in terms of automation. The power differences between propulsion systems will always be significant, but hybrid technology is improving all the time, and regulations are driving more sustainable alternatives.

Meanwhile, AI-assisted vessels will save money for operators by reducing the number of onboard staff required. For maritime transportation, breakthroughs in the fields of artificial intelligence, digitalization, Blockchain, IoT, and automation are becoming increasingly important. It helps streamline existing processes, creating new business opportunities and transforming supply chains and the trade geography of the live fish carrier market space.

“Growing Demand for Fisheries across Regions”

Fishing, seafood farming, and fish processing are all part of the fishery industry. Commercial and recreational fishing operations have been increasing over the years, wherein, commercial businesses catch far more fish.

Fish is the most regularly consumed animal protein on the planet, with the seafood market expected to be valued at over US$ 336 billion by 2025. Fish consumption per capita has likewise remained stable for more than five years, at around 20 kg per customer. This will open up options not only for frozen fish but also for live fish in the future.

Regional government initiatives serve as a boosting factor for promoting the use of live fish carriers. In 2020, live fish were the world's 722nd most traded product, with a market valuation of US$ 1.9 billion.

Increased export and import volumes of live fish will result in higher trade, which will have a positive influence leading to greater penetration of live fish carriers.

China has one of the largest seafood industry networks in the world. The country has a significant share of live fish export and import - around 29.6% and 8.6%, respectively, in the world, and is placed at the highest position in the net live fish market trade with a net export value of US$ 406 million in 2020.

Moreover, China holds a commanding position on a country level, accounting for roughly 19.4% of live fish carrier fleet production in 2021. Demand is primarily driven by the established food processing industry and high demand for live fish in the country.

All these attractive figures and development in China present significant opportunities for live fish carrier shipbuilding manufacturers. The growing live fish industry is likely to create an absolute dollar opportunity of US$ 547.9 million by 2032.

Why is the Norway Live Fish Carrier Market a Lucrative Space?

The European region is one of the most dominating regions in seafood resources and the processing industry and is driving the growth of the live fish carrier market.

The live fish carrier industry is specialized in Norway and is involved in transporting and processing live salmon. The underlying driver for the segment is the production of salmon in aquaculture.

Norway is the world’s second-largest exporter of fish and fishery products, and stood at a valuation of US$ 11.9 billion in 2020. Owing to this, Norway accounted for nearly 15.9% of global live fish carrier production in 2021.

The popularity of salt water live fish carriers has increased steadily in recent years owing to greater length and increased capacity. This has resulted in the segment surpassing a market valuation of US$ 2.1 billion in 2021. Salt water carriers have been identified as being offered by a variety of fleet operators and suppliers across the world.

Further, in the past decade, the live fish carrier market has shown significant growth owing to increasing globalization and trade in the world economy, further fueled by favorable international regulations for maritime cargo movements. This has resulted in a Y-o-Y increase of 1.4% between 2017 and 2021.

Moreover, with the global economy on the way back up, by the end of 2032, the salt water carrier sub-segment is predicted to expand 1.7X.

Rising popularity of live fish in seafood processing fields is resulting in higher trade volumes of the live fish. Around the globe, there is a large demand-supply mismatch of live fish, and owing to this, it is anticipated that the mid capacity (2500 – 5000 m3) and high capacity (above 5000m3) carriers will exhibit higher demand. These carriers are extensively utilized for the transportation of live fish.

Mid and high capacity fish carriers are equipped with various tools and accessories. Owing to this, these are the most attractive segments under the capacity type. The 2500-5000 m3 vertical is set to create an absolute $ opportunity of US$ 1.13 billion by the end of 2032.

Key manufacturers of live fish carriers are always developing new ship designs using advances in technology, which has fueled many recent innovations. In the live fish carrier market, key participants employ strategies such as forming productive relationships and collaborations with governments and end-use customers such as seafood processing industries and fleet operators.

The global live fish carrier market is valued at US$ 3.2 billion and is anticipated to reach US$ 5.17 billion by 2032.

*131 figures and 74 tables includes by FactMR