Advancements in technology have resulted in high demand for smart materials across several industry verticals due to their ability to change one or more properties when subject to certain external stimuli. Magneto rheological fluids have recently emerged as one of the most popular smart materials in the industry and the rising use of smart materials in various applications is projected to bolster market development in the future.

The MRF market in Asia Pacific is anticipated to exhibit a highly lucrative demand outlook across the forecast period owing to the growing demand for automation, increasing automotive production, and technological innovations in the manufacturing sector. China is expected to be a key market in this region and demand for magnetorheological liquids in China is slated to progress at a phenomenal 21.5% CAGR through 2032.

On the flip side, the lack of awareness of the benefits associated with the use of magnetorheological fluids is expected to have an impeding effect on the overall magneto-rheological (MR) fluid market evolution over the coming years.

This new magneto rheological fluids industry research by Fact.MR, a market research and competitive intelligence provider, details a comprehensive account of all the key trends, restraints, opportunities, and challenges affecting market development over the forecast period.

How Can New Entrants Make a Mark in the MRF Market?

“Start-ups Should Invest in R&D of Novel Products”

MR liquids are smart materials that have been gaining traction in the past couple of decades but the lack of awareness among consumers has limited the market potential to a certain extent, which leaves out a lot of room for opportunity for new entrants in the market. 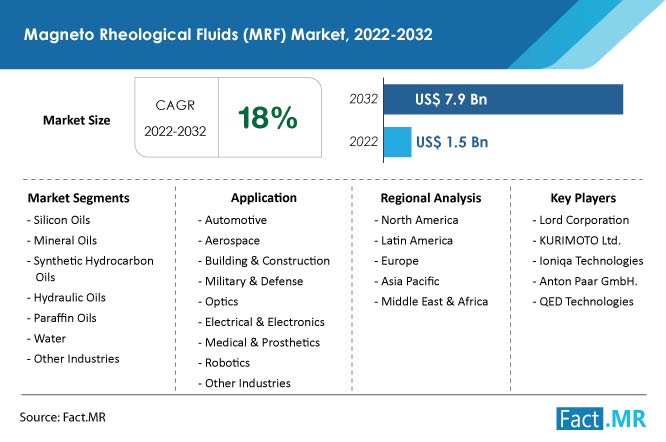 What is the Magneto Rheological Fluid Demand Outlook for the U.S.?

The United States is known for the quick adoption and development of novel technologies, which makes it a highly lucrative market for magneto-rheological fluids (MRF) as well. The rising popularity of automation, the growing use of robotics, and increasing investments in research and development are some of the prime factors that are expected to propel sales of magneto rheological fluids over the next ten years.

Will Japan Be a Bankable Market for Magneto Rheological Fluid Manufacturers?

The robotics industry in Japan is known across the world as one of the most advanced ones and this makes it a highly attractive MRF market as magneto rheological fluids are being extensively used in robotics. The rising adoption of robots and the increasing trend of automation are other factors that could boost magnetorheological fluid demand in Japan throughout the forecast period.

The Japan MRF market is predicted to exhibit expansion at a stellar 15.9% CAGR from 2022 to 2032. Demand for MR fluids in Korea is also anticipated to have a bright outlook and will be governed by the automotive industry in the country.

Rising demand for automation and the presence of key automotive manufacturers in Germany is expected to prominently influence MR fluid sales over the coming years. Advancements in robotics and prosthetic technologies are also expected to fuel magneto rheological fluid demand in the European region through 2032.

Shipments of magnetorheological liquids in Germany are slated to increase at a 17% CAGR over the next ten years.

The automotive industry is anticipated to witness the highest demand for magnetorheological fluids over the coming years and this can be ascribed to the development and deployment of magnetorheological liquid-based braking systems, clutching systems, and dampers. MRF-based systems are more responsive and effective and this is a prime factor that is projected to promote their adoption by prime automotive companies. It is estimated that in the next 20 years almost 50% of all vehicles could be using MRF-based suspension systems.

Which Base Fluid Will Witness High Demand through 2032?

Based on base fluid, the magneto rheological fluids market is segmented into silicon oils, mineral oils, synthetic hydrocarbon oils, paraffin oils, hydraulic oils, water, and others.

Synthetic hydrocarbon oils are anticipated to be at the forefront of global market development in the future owing to their high use in the automotive industry as gear oil, engine oil, etc. Demand for synthetic hydrocarbon oils is expected to rise at an astronomical 19% CAGR over the next ten years and is estimated to account for a revenue valuation of US$ 1.6 billion by the end of 2032. Meanwhile, demand for water is projected to increase at an 18.5% CAGR across the forecast period till 2032.

Worldwide sales of magneto rheological fluids account for a market value of US$ 1.5 billion in 2022.

Demand for synthetic hydrocarbon oils is anticipated to rise at 19% CAGR over the next ten years.

Sales of magnetorheological fluids in Japan are forecasted to rise at 15.9% CAGR through 2032.