Fracking Fluids and Chemicals Market: About the Report

The fracking fluids and chemicals market is set to exhibit growth at a positive rate, especially as countries around the world continue witnessing surging energy demand. Increasing number of exploration activities undertaken worldwide also is prognosticated to offer lucrative prospects. Fact.MR identifies the rising demand for natural gas as a chief driving factor. As behemoths in the energy sector increasingly rely on hydraulic fracking for oil and gas extraction, the demand for fracking fluids and chemicals is likely to rise.

Also, the adoption of natural gas by countries is anticipated to create attractive opportunities for the players in the market. Several countries across Europe, including Germany, Netherlands, and France have called for European Union (EU) legislation to improve funding on low-carbon technologies. Various policies are underway to support renewable power.

Driven by these factors, global fracking fluids and chemicals market is projected to exhibit growth at a CAGR of more than 10% over the forecast period 2020-2030, according to a recent report published by Fact.MR.

However, stringent environmental regulations and government restrictions towards fracking fluids and chemicals can act as market deterrents in the near future.

Increase in Horizontal Drilling Of Wells to Fuel Demand

Rising demand for energy is generating need for more exploration which is directly impacting the demand for fracking fluids and chemicals in a positive way.

Consequently, horizontal drilling of wells for oil extraction is seeing an increased demand over the past decade. This has led to an increase in the horizontal fracking activity. This trend is expected to continue over the forecast period, boosting the fracking fluids and chemicals market growth.

Also, companies are able to extract large amount of oil from one horizontal well instead of drilling more than a dozen vertical wells. This helps in saving cost and time for the oil and gas companies. These factors are likely to offer lucrative growth prospects for the market.

Demand for energy is on the rise with each passing day across the globe. Countries around the world are investing more in industries to give boost to their economies by increasing production. According to the International Energy Agency (IEA), a total of US$ 259 Bn was invested in energy efficiency across transport, industry, and building sectors in 2019.

Despite a lackluster period due to ongoing COVID-19 crisis, this trend is likely to pick up in the coming years. Besides this, surging population and subsequently rising energy demand are expected to propel growth of fracking fluid and chemicals market in the next decade.

Rising concerns regarding impacts of fracking activities on the environment might act as a market restraint in the near future.

Fracking activity can lead to contamination of surface and ground water in the nearby region of the wells. Also, the supply of water to the area might get affected as fracking activity requires large amount of water.

These concerns have led to the introduction and implementation of stringent regulations to ensure environmental safety and need for alternatives. Thus, anticipated to hamper the market growth in the next decade.

North America is the most lucrative region for fracking fluid and chemicals market. Its dominance is anticipated to continue over the forecast period. This can be attributed to the drilling industry which is highly developed in the region, and thus the requirement of fracking chemicals in the region is high.

Asia Pacific is expected to exhibit significant growth in the next decade owing to rise in consumption of energy. Growth in the region is led by China, which has the most number of shale reservoirs after the U.S. and Canada.

Europe too is expected to emerge as a lucrative market in the near future owing to rising oilfield productions led by deep water discoveries in the North Sea. The region is expected to provide potential opportunities to the fracking fluid and chemical companies over the forecast period as development of offshore and unconventional reservoirs is picking pace in the region. 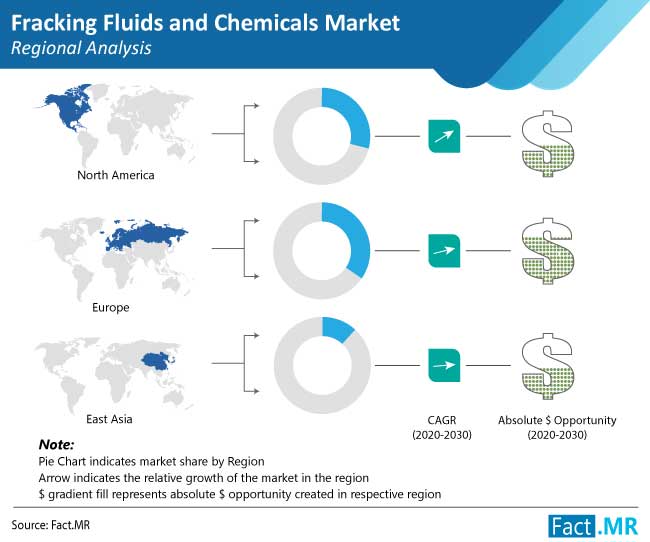 Fracking fluid and chemical market is segmented on the basis of function type as biocides, corrosion inhibitors, friction reducers, gelling agent, scale dissolver, cross-linkers and others.

Among these, gelling agent segment is expected to be the most lucrative segment over the forecast period.

Fracking fluid and chemical market is segmented on the basis of fluid type as water based, oil based, foam based, and others.

Among these, water based fluid is more commonly used hence it holds the major market share. Water based fluids have various applications and advantages such as its cost effectiveness and ability to be pumped at higher rate.

Companies in the market are adopting strategies such as partnerships, collaborations, and joint ventures in order to increase penetration worldwide and expand customer base. Also, these strategic collaborations help players address the changing technological requirements.

“Global fracking fluid and chemical market is projected to grow at CAGR of more than 10% over the forecast period 2020-2030. The growth can be attributed to increased popularity of horizontal and directional drilling. However, companies need to take cognizance of environmental concerns arising as a result of fracking activities and find alternatives to cope up with this problem in order to achieve consistent market growth.”

The onset of COVID 19 pandemic has affected economies across the globe. Lockdowns imposed by governments have had a direct or indirect impact on industries across all sectors. This has caused a major shift in business activities including supply chain operations, production, vendor operations among others. Fracking fluid and chemicals market also is impacted as oil extraction and drilling activities were halted due to the restrictions posed by lockdowns.

Meanwhile, China is facing the wrath of the world as it is being blamed or the emergence of the pandemic. Amid all these factors, changing political and economic relationship with China is expected to impact global fracking fluid and chemicals market.

What is the growth rate of the Fracking Fluids and Chemicals Market?

Who are the key players in the Fracking Fluids and Chemicals market?

Metalworking fluids market is projected to expand at a CAGR of over 4% and is expected to be valued ...

The global grinding fluids market is expected to witness significant growth during the years, 2021-2...