Demand for mooring connector equipment is expected to grow steadily as there has been rapid development of technology-improved drilling and production capacity in rigs and vessels, supporting production and exploration activities in deep and ultra-deep-water regions across the world.

Improved energy demand has led to increased oil and gas production across North America and Europe. With the maturity of onshore oil and gas fields, exploration and production activities are diverting to offshore reserves. Advanced technological consequences related to the maximum utilization of wind and wave energy are expected to raise the market for mooring connector equipment.

As per detailed industry analysis by Fact.MR, a market research and competitive intelligence provider, the global mooring connector devices is predicted to expand at a much higher CAGR of 5.7% through 2032 as compared to the CAGR of 2.2% registered between 2017 and 2021. 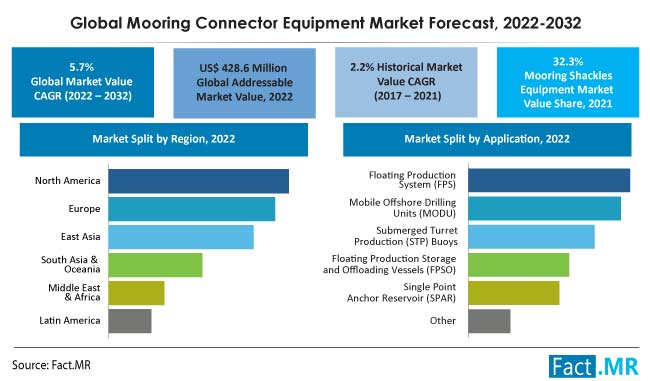 How is Mooring Connector Equipment Market Growth Being Driven?

During the forecast period, the industry is expected to be driven by the rapid expansion of oil & gas from offshore fields and the increased development of the marine industry. Also, new regulations have been set forth for several areas, including mooring system designs, operations, inspections, maintenance, installation assurance, and methodology.

Optimization of mooring equipment in the oil & gas and marine industry is likely to witness a significant boost over the years ahead.

MODU is a vessel capable of drilling to explore resources under the seafloor, such as gaseous hydrocarbons, liquids, and salts. With rising industrialization and urbanization, the demand for oil & gas in developing countries is growing rapidly. As a result, the mooring equipment market is set to create ample opportunities for revenue generation.

Which Country Accounts for Higher Demand for Mooring Connector Equipment?

The United States mooring connector systems market accounts for the largest market share of 90.2% in North America and is poised to register 5.7% CAGR during the forecast years.

The market is expected to grow significantly due to increased demand for use in seafloor exploration, oil, and renewable energy. Increased technological developments related to the ultimate use of wind and wave energies are expected to push the U.S. market as a whole over the coming years.

What is the Market Scenario in China for Mooring Connector Equipment?

As such, demand for mooring connector equipment in China is only set to increase over the coming years.

Why is Demand for Mooring Shackle Equipment Rapidly Rising?

Mooring shackle equipment, under the segment of equipment type, will capture a market of 34.5% by 2032 and is projected to expand at a high 6.4% CAGR over the assessment period. Shackles are mostly used in static and lifting systems as removable links to connect ropes and other fittings.

A wide range of components are used in mooring systems, and it is important to make sure that these components are of at least equal strength to the chain. The market for mooring shackle equipment is likely to gain traction owing to its offering of better performance. Even, manufacturers are targeting improving the efficiency of shackles to enhance overall sales of mooring connector equipment.

By 2032, floating production storage and offloading vessels (FPSO) are poised to increase at 5.4% CAGR and provide an absolute dollar opportunity of US$ 47.3 Million.

The mooring connector equipment market is predicted to rise in response to an increase in large-scale infrastructure investment projects in the maritime sector. Demand for new-build and modified FPSO boats has increased as the rate of onshore oil discoveries has dropped to record lows, as well as technology that allows for efficient deep water oil exploration at previously unimaginable depths.

FPSOs have grown in popularity in the oil industry because they are less expensive than traditional offshore oil platforms.

Market participants have started providing tailored offerings, along with top-notch mooring technology and services based on various specifications. Intense competition is witnessed among major rivals in the mooring equipment space because of the increased growth potential and market opportunity.

The global mooring connector equipment market is currently valued at US$ 428.6 million.

The global market for mooring connector devices increased at 2.2% CAGR between 2017 and 2021.