Worldwide sales of NdFeB magnets are projected to increase at an impressive CAGR of 7.9% from 2023 to 2033. Currently, the global NdFeB magnets market is valued at US$ 2 billion and is likely to reach a market size of US$ 4.3 billion by the end of 2033.

Neodymium-iron-boron (NdFeB) magnets are rare earth magnets made of neodymium, iron, and boron. NdFeB magnets are permanent magnets with the greatest magnetic qualities compared to ferrite, alnico, and samarium cobalt (SmCo) magnets. They are extremely cost-effective and have a strong resistance to demagnetization.

The COVID-19 pandemic had an impact on almost every industry. Several governments imposed stringent rules on trade, supply chain, logistics, and limited production during the outbreak.

Moreover, NdFeB magnets are also used in robotics to power sensors, wheels, and motion. There is a rise in demand for NdFeB magnets to maintain astronauts' muscular tonus throughout space trips. Furthermore, increasing use of NdFeB magnets as a motion-generating device in molar distillation, palatal expansion, and orthodontic treatments is driving global market growth.

Neodymium-iron-boron magnets are used in the production of speakers to generate an opposing magnetic field that causes vibrations. The rising demand for NdFeB magnets in electrical appliances like washing machines, air conditioners (ACs), cooling fan motors in computers, dryers, microwaves, and fans, is propelling the neodymium-iron-boron magnet market.

Why is the Need for NdFeB Magnets Intensifying?

These advantages boost their usage in a variety of applications, such as wind turbines, automotive parts, actuators, speakers, household appliances, and electrical equipment. As a result, the expansion of these applications will increase demand for NdFeB magnets.

Which Factor Can Impede the Sales Growth of NdFeB Magnets?

Fluctuating raw material costs are a major factor projected to impede the sales of NdFeB magnets. Unanticipated hurdles, such as rising energy costs and unexpected swings in raw material prices, are affecting supply chains and making it harder for manufacturers to offer quality products at affordable prices while earning profits.

There have been fluctuations in the costs of rare earth metals and other raw materials used to manufacture NdFeB magnets. This has an impact on the quantity and quality of NdFeB magnets manufactured. This reduces NdFeB magnets' use and taints their image as cost-effective materials. 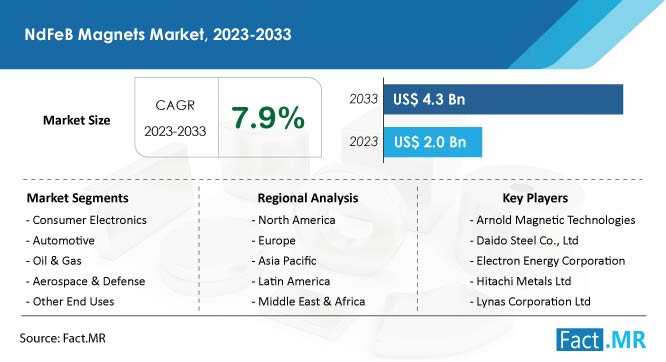 How are Japan and South Korea Supporting Asia Pacific in Maintaining its Supremacy in the Global Market?

Asia Pacific held 76% of the global neodymium-iron-boron (NdFeB) magnets market in 2022. Asia Pacific is expected to dominate the global market during the forecast period.

Strong economic growth, rising disposable income, and concurrent increase in the manufacturing of electronics, passenger automobiles, and wind power generators in developing countries are projected to boost the market growth in Asia Pacific. Moreover, the relocation of manufacturing units from other regions to Asian countries, increasing investments in the electric vehicle industry, and increased output of electric motors are likely to fuel the regional market expansion.

Japan and South Korea are major supporters of the Asia Pacific market. Japan is the world's second-largest market for NdFeB magnets. Japan is home to some of the world's largest electronics and automobile manufacturers, including Panasonic, Hitachi, Toyota, Sony, Honda, Nissan, and others, which drives demand for these magnets in the country.

Why is the United States a Prominent Market for Neodymium-Iron-Boron Magnet Suppliers?

The United States is an important market for rare earth elements. The demand for NdFeB magnets is anticipated to rise significantly due to increased usage in applications such as wearable devices, electric vehicles, robotics, and wind power.

The automotive industry in the United States is expanding rapidly. The country has witnessed a substantial increase in the adoption of electric vehicles, owing mostly to the innovative products offered by important manufacturers like Tesla, Chevy, and Ford, among others. Tesla became one of many electric carmakers to use NdFeB magnet motors in early 2018.

Growing demand for NdFeB magnets in a variety of end-use industries has compelled leading producers to establish new facilities.

What is the Demand Outlook for NdFeB Magnets in Germany?

Why are NdFeB Magnets Widely Used in the Automotive Industry?

Electric motors, for example, are utilized in vehicle windscreen wipers, door-closing systems, and windows. The performance of NdFeB magnets is better in lighter and smaller motors. As the automotive sector strives to reduce weight, the use of NdFeB magnets is projected to grow.

NdFeB magnets are also employed in fiber optic technologies that power cellphones and the internet. They are employed in mobile phone speakers, where N52 and N48 magnetic grades are commonly used. These are the most durable performance grades available, able to withstand high temperatures during the production process.

The global NdFeB magnets market is valued at US$ 2 billion in 2023.

The market for NdFeB magnets is projected to touch US$ 4.3 billion by 2033.

*38 figures and 116 tables includes by FactMR