Almost every organization and individual now makes use of the Internet. Online purchasing has increased as the e-Commerce sector has grown in popularity. A vast number of consumer and commercial items are purchased on a daily basis, resulting in a large number of parcel shipments. Generally, manual parcel sorting takes a long time. As a result, an efficient technique is required to simplify the delivery of parcels from one location to another.

As technology advances, firms are gravitating toward automation in their shipping procedures. Parcel sortation systems are automated procedure that involves identifying parcel items on a conveyor system and routing them to certain destinations using devices controlled by task-specific software.

Parcel sortation systems are used in a variety of industries, including logistics, e-commerce, airports, pharmaceuticals & medical supply, food & beverages, and others.

Key market players are focusing on developing technologically advanced products to stay ahead of the competition.

Why is Demand for Parcel Sortation Systems Intensifying?

The use of automation in end-use industries such as e-commerce, logistics, and others provides improved performance by reducing errors and increasing quality. Moreover, the increasing implementation of IoT and robotics in industrial automation is expected to fuel the demand for parcel sortation systems.

Which Aspect Can Limit the Sales of Parcel Sortation Systems?

The massive investments necessary in the initial phase are a significant aspect that can limit the sales of parcel sortation systems. Moreover, the associated cost, such as maintenance costs, software solutions, integration of intelligent sensors, and aftermarket services, increases the overall ownership costs.

Furthermore, small and medium-sized businesses find it challenging to switch from traditional sorting systems due to low production output and return on investment, restructuring existing facilities designs, and other aspects. 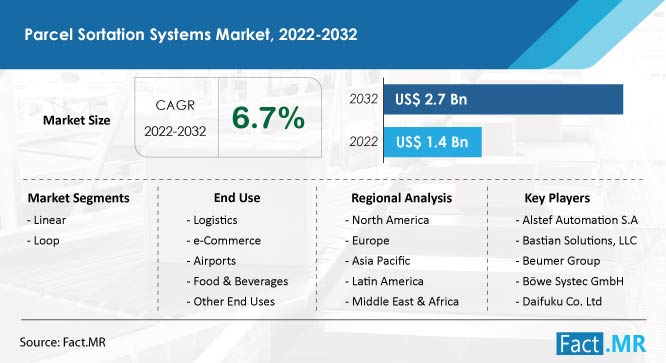 Why are the United Kingdom and Germany the Largest Contributors to the European Market?

The Europe parcel sortation systems market is projected to develop at a CAGR of 5.4% from 2022 to 2032. The United Kingdom and Germany are the largest contributors to the European market.

Due to the e-commerce boom, parcel delivery is growing across Europe, particularly in countries like the United Kingdom and Germany. Many courier and postal firms face considerable challenges as a result of the increased shipment volume. The growing demand for delivered goods is promoting the use of automation in sorting and handling shipping items, thereby boosting the demand for parcel sortation systems.

Along with the e-commerce boom, the aviation industry in the United Kingdom drives the market for parcel sortation systems. Four major UK airports have announced expansion plans to accommodate increased passenger traffic.

Moreover, Germany is contributing considerably to the market growth in Europe. The country is increasingly adopting automation technologies to boost the distribution process.

What Allows the United States to Dominate the North American Market?

The demand for parcel sortation systems in North America is rapidly increasing. In North America, automation of warehouse and order fulfillment processes has become the major technique for ensuring supply chain productivity and financial goals while improving customer service standards.

The United States market garnered US$ 322.1 million in 2022. Over the next ten years, the United States is expected to dominate the North American market. Organizations across the United States boost order accuracy by automating distribution operations. Moreover, organizations that automate their operations see a significant drop in operational expenses and a notable increase in service levels, which immediately impacts overall profitability.

Why are Parcel Sortation Systems in High Demand in Japan and South Korea?

The demand for parcel sortation systems is expected to grow in Asia Pacific during the study period. This is due to the rapidly rising retail and e-commerce industries in developing nations.

Japan and South Korea are projected to promote market growth in Asia Pacific. With the growth of online shopping portals, businesses in these countries have had to manage massive volumes of deliveries that must be delivered on time to their customers' doors. As a result, parcel sortation systems are in high demand in Japan and South Korea.

Parcel sortation systems add value by sorting parcels and automating several activities within a warehouse and supply chain management process like re-allocation and order fulfillment, all while seamlessly connecting with existing e-commerce platforms.

How is the e-Commerce Industry Driving the Demand for Parcel Sortation Systems?

The demand for parcel sortation systems is skyrocketing due to the rapidly growing e-commerce industry. This is due to a spike in the number of internet users buying products through online platforms. Moreover, many retailers and wholesalers have begun automating their everyday operations to fulfill the scheduled delivery time.

The global parcel sortation systems market is valued at US$ 1.4 billion in 2022.

Demand for parcel sortation systems is likely to touch US$ 2.7 billion by 2032.

Worldwide sales of parcel sortation systems are anticipated to increase at a CAGR of 6.7% during the forecast period.