The global perfluorocarbons market, the industry is gaining steady traction, anticipated to expand 1.5x throughout the 2021-2031 assessment period. As per the report, the market is likely to reach US$ 1.4 Bn by the end of the said forecast period. Applications will abound across semiconductor cleaning, cosmetics and medical domains respectively.

As per Fact.MR – a market research and competitive intelligence provider, during the historic period of 2016 to 2020, the market expanded at a CAGR of 3%.  Perfluorocarbons manufacturers have been witnessing steady demand from diverse sectors over the past years. Growing focus on new inventions and advancements in manufacturing infrastructure has further catered to the growth of suppliers.

As key application sectors such as cosmetics, electrical processing, and semiconductor cleaning, to name a few, are getting back on their feet post COVID-19, the requirement and use of perfluorocarbons are likely to rise further over the coming years.

A rise in focus and investments in research & development (R&D) activities, coupled with prominent demand for alkyne, perfluoroalkane, and others, is expected to cater to the growth of suppliers through 2031. Considering these factors, the global perfluorocarbons market is slated to expand at around 4% CAGR over the next ten years (2021-2031).

Perfluorocarbons have enjoyed an important position in the healthcare domain- being recognized as synthetic oxygen carriers among other applications. Of late, the diagnostic imaging sector has opened up credible opportunities for perfluorocarbons.

Perfluorocarbons enhancement effects are detectable by ultrasound and magnetic resonance, as well as by standard radiography and CT. Out of all PFCs, perfluoroctylbromide (PFOB) is deployed at a CT contrast agent to enhance the blood pool, and as both a CT and an ultrasound contrast agent to enhance liver, spleen, abscesses, infections and tumors.

How is the Cosmetics Industry Widening Growth Margins for Perfluorocarbons?

The cosmetics industry has been expanding steadily owing to the rise in disposable income, economic development, and improvement in the standard of living; primarily in emerging economies are driving the demand for cosmetics.  Growth in demand for anti-aging products, services, and devices can be attributed to the rapidly aging and affluent baby boomer population and increasing beauty and health awareness among generations X and Y.

Furthermore, growing penetration of social media and relentless urge to have younger-looking skin has increased the number of people undergoing anti-wrinkle and anti-cellulite treatment & procedures. According to the International Society of Aesthetic Plastic Surgery (ISAPS), non-surgical anti-aging procedures across the U.S. are gaining wider adoption over invasive treatments. With the growing demand for anti-aging surgical and non-surgical procedures across the U.S., dermatology clinics and facilities will witness a massive boom over the forecast period.

How is a Flourishing Healthcare Industry Widening Uptake across the U.S?

The U.S is leading the North American market, as far as perfluorocarbons are concerned, and is set to remain dominant throughout the forecast period. Highly advanced medical & electronics industries and technological advancements in manufacturing sectors are boosting demand for perfluorocarbons in the country.

According to a report titled “The Medical Device Industry in the United States”, published by SelectUSA, the United States medical & healthcare industry is highly progressive and includes more than 6,500 medical device companies.

As stated in the report, electro-medical equipment, surgical appliances & supplies, and others are some key segments, with the U.S. industry representing over 40% of the global industry. These figures represent new opportunities awaiting perfluorocarbon manufacturers in the U.S, expected to surge at nearly 5% CAGR.

Why is Germany in the Spotlight for Perfluorocarbon Suppliers?

Germany is at the forefront of Europe’s perfluorocarbons (PFCs) market and is likely to maintain its lead throughout the forecast period. The high requirement in cosmetics, semiconductor cleaning, and medical sectors is predicted to bolster growth in Germany.

According to a report titled “Cosmetics and Personal Care Industry Overview”, published by Cosmetics Europe, Germany’s cosmetics industry is the largest in Europe and valued at EUR 14 billion.

As stated in the report, the cosmetics and personal care industry brings at least EUR 29 billion in added value to the European economy annually, while the contribution of Germany is the highest. A CAGR worth 6% is expected across the country until 2031.

How big is the Opportunity in China’s Perfluorocarbons Industry?

Backed by highly developed manufacturing infrastructure and advanced key application sectors, China is in the limelight for key perfluorocarbon manufacturers.

According to a report titled “China- Cosmetics and Toiletries Industry” published by the International Trade Administration on 3rd February 2021, between 2011 and 2018, the cosmetics industry in China experienced steady growth expanding by over 60%.

As stated in the report, China’s personal care and cosmetics industry is valued at US$ 42.8 billion and is forecasted to become the world’s largest industry within the next 5 years. Based on these aforementioned trends, perfluorocarbons sales are anticipated to surge at over 5% CAGR.

What Makes India a Highly Lucrative Market for Perfluorocarbons?

India has emerged as a high potential market for perfluorocarbons and is expected to show hegemony during the forecast period. Well-developed key application sectors along with steady growth in demand are expected to cater to the growth of industry players in India.

According to a report published by Invest India, the medical and healthcare industry in India is projected to reach US$ 372 billion by 2022. According to the India Brand Equity Foundation, the healthcare market can increase three-fold to Rs. 8.6 trillion (US$ 133.44 billion) by 2022.

In Budget 2021, India’s public expenditure on healthcare stood at 1.2% as a percentage of the GDP. This gives a glimpse of the high growth scope in India for perfluorocarbons suppliers. A revenue share worth 35% is anticipated for the Indian market. 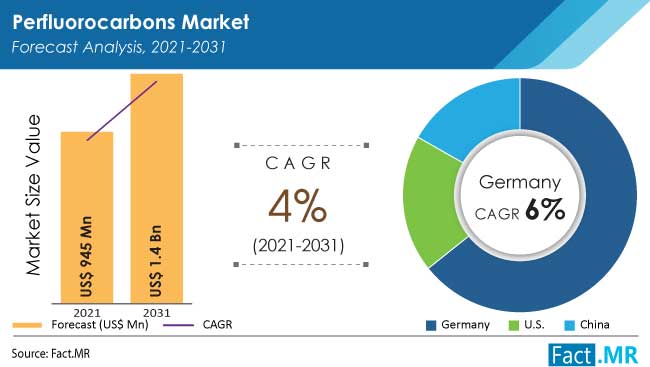 Why is Perfluoroalkane Highly Preferred in This Industry?

Presently, perfluoroalkane is the leading segment in terms of product and is expected to maintain its lead throughout the forecast period. High fluoropolymer production efficiency, enhanced resistance to heat, stain, grease or oil and applications for key end use industries is driving its growth.

According to Fact.MR, perfluoroalkane is likely to register a CAGR worth 4% across the 2021-2031 forecast period. Perfluoroalkane imparts excellent abrasion resistance, along with the ability to stay dry despite water absorption. This renders it as the primary choice for key applications.

Perfluorocarbons Usage to be Maximum for Semiconductor Cleaning?

According to Fact.MR, perfluorocarbons are likely to be most extensively applied in manufacturing semiconductor cleaners, accounting for nearly 45% revenue share until 2031. They are typically used for film etching, chemical vapor deposition chamber cleaning, or as coolants for semiconductor manufacturing tools.

While conventional perfluorocarbons are highly volatile and flammable, manufacturers have been developing non-flammable ones as well. For instance, Solvay S.A offers the Galden® SV solvent fluids, exhibiting a boiling point range of 55-135o C, is safe, non-flammable and non-toxic.

Key players involved in the market are rigorously investing in the development and launches of new products to gain a competitive advantage and expand their consumer base. Mergers & acquisitions along with diversification of product portfolios are key business strategies implemented by participants in the industry.

How much is the global market for perfluorocarbons worth?

According to Fact.MR, the market for perfluorocarbons is poised to reach US$ 945 Mn by 2021

What is the projected growth rate for the market for perfluorocarbons?

What is the projected market value of perfluorocarbons?

By how much did the market for perfluorocarbons grow in the past 5 years?

What are the future prospects for perfluorocarbons demand?

What is currently driving demand for perfluorocarbons?

How opportunistic is the market in the U.S?

How will Germany fare with respect to perfluorocarbons demand?

Germany is likely to be the fastest growing market, rising at a CAGR of 6% until 2031

At what rate will perfluorocarbons sales accelerate across China?

Which segment accounts for high sales of perfluorocarbons?

Perfluoroalkane holds the maximum share, and is likely to exhibit a CAGR of 4% until 2031