A recent study by Fact.MR on radiation cured products or RCPs throws light on product pricing, market risks, in-detail study of economies of agglomeration and scale, techno-economic strongholds, and other business aspects.

As per Fact.MR, a market research and competitive intelligence provider, over the past half-decade, strong tailwinds from the furniture & plastic industry have driven the market for radiation cured products, while other end-use industries also supported market growth considerably.

As the radiation curing process is instantaneous and takes much less time than traditional thermal curing, it is employed for a wide range of applications. Global RCP demand is primarily driven by technology's environmental compliance and a boost in infrastructure operations, which has resulted in an increase in demand for wood coatings.

Radiation curable technology generates extremely little to no waste, which is then disposed of as regular trash. In comparison to other curing technologies, the process consumes less room, time, and energy.

The demand-side portrays a considerable market reach for the product under the umbrella of economies of agglomeration and collaboration posture of radiation cured goods makers across regions. This not only helps companies expand but also helps in pricing the product competitively.

The COVID-19 wave struck industries on a macro scale in 2020, with the most noticeable impact visible on the automotive industry, which saw sales and output stall, with the effect cascading to radiation cured products as well. Furthermore, RCP supply, which is largely concentrated in the furniture industry, was severely harmed by the lack of market diversification.

On the other hand, medical applications of RCPs such as coating & adhesive components, among others, have resulted in growth of the radiation cured products (RCP) market from Q2 2020 to Q3 2021. Over the same time period, this has lowered the total impact on RCPs by 1.5%.

Over the forecast period, the market is set to recuperate and the explanation has been divided in 3 comprehendible periods:

Short-run: Over the short-run forecast period, demand for radiation cured products (RCPs) is anticipated to grow at a much faster pace assisting market recovery by Q4 of FY2021.

Medium-run: Over this term, it is anticipated that RCP manufacturers would increase investments in product development for its diversification across end-use industries

Long-run: Evolution of inexpensive substitutes of RCPs and strong sustenance of top contenders are anticipated to be observed over the long-run forecast period.

Below points summarize the RCP market over the long-run forecast period: 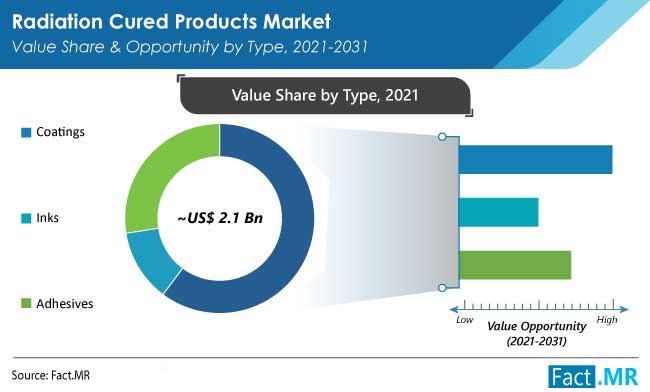 Why Economies of Agglomeration is the Prominent Driving Factor for Radiation Cured Products?

Economies of agglomeration serve as the foundation for increasing the sales the bulk products around the world. As far as radiation cured products are concerned, major producers such as 3M, Allnex, BASF SE, PPG Industries Inc., and Evonik Industries AG, among others, have strategically located their operations near end-use industry clusters over the last two decades.

Allnex is a leading global provider of ultraviolet radiation cured products/electron beam radiation cured products. “The resin, in general, is one of the most important components of the coating since it provides the majority of the final coating's chemical and mechanical capabilities, as well as some haptic effect,” said Gregory Gerin, Global Marketing Director at Radcure, Allnex.

Other industry experts have added that with the market being highly concentrated on product offerings, manufacturers have chosen to prefer economies of agglomeration to hold a competitive edge over others.

Radiation cure product manufacturers have observed the opportunistic pocket of erecting production facilities in cluster zones of prominent end-use industries. The market is running on many such strategic moves and has been lately witnessing huge traction. This also lessens the logistics costs involved. 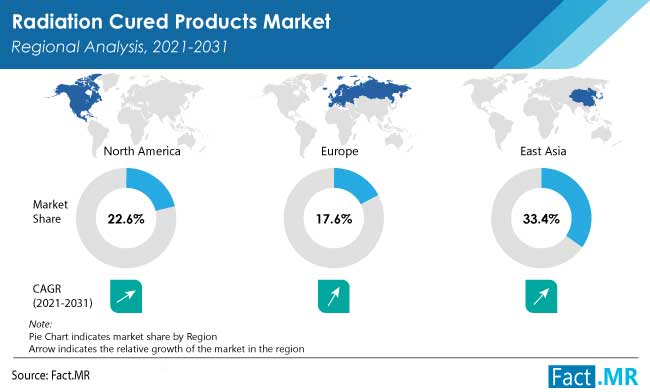 What are the prominent Contributing Factors to the U.S. Radiation Cured Products (RCP) Market?

The United States, being centred with top governing and regulating bodies, has been bolstering market growth over the past half-decade. Further, it has remained the driving force behind the adoption of low-pollution coating technologies such as radiation cured coatings.

Key manufacturers positioned in the United States are 3M, EnergyCuring USA, and Allnex, who possess significant production capacities and have been relying on technological advancements to acquire a higher market share. These companies also have significant reserves being spent on enhancing radiation curable product formulations.

How Does China’s Prominence in Technological Aspects Affect the Market for Radiation Cured Products?

Currently, China dominates the demand and supply of many products across the globe. The Chinese government’s subsidy support was always an important factor bolstering demand and accounting for positive growth over the medium-run forecast period.

Key manufacturers such as Eversorb and Hi-tech are poised to benefit from the government providing ease of market access and enough support infrastructure for developing newer solutions.

How Has Radiation Cured Products Demand been Shaping across Evolving Markets?

India: India has been highly active in developing its economy, and has been concentrating on its construction industry. Major end-use industries are likely to showcase positive response, and the market is highly anticipated to provide extensive support at the global level. Comprehending the aforementioned factors, the market for radiation cured products in India is set to grow 2.1X by 2031.

Japan: Japan is one of the prominent producers of radiation cured products. With a majority of end-use industries being situated in the country, key players have strategically planned to erect production units to eliminate channelling costs. In 2020, demand for radiation cured products for wood applications was valued to occupy 35% market revenue share.

Germany: With outstanding technological capabilities, Germany is well-known for its excellence in the automotive sector, and holds a prominent position in the radiation cured products space. Reinforced collaboration between end-use industries and key players has strengthened market growth and is said to bolster demand for the product over the coming years. The Germany radiation cured inks market is estimated to showcase better growth prospects over the decade.

Why is the Medical Sector Anticipated to Hold Strong Market Position?

Rising demand from medical equipment manufacturers will act as a cushion for radiation cured product suppliers across the globe. Consumption of RCPs for medical application is anticipated to gain 1.5X market valuation over the period of 2021 to 2031.

Over the past half-decade, the construction industry started witnessing huge traction in emerging countries. Countries such as India and China have announced a large number of upcoming projects, which has lured vital players to the region.

In Asia, use of radiation cured coatings in printed electronics, film resists, printing plates, semiconductor resists, and color filter resists is extensively observed in the manufacturing of switch boards and others.

These applications account for 35% of overall market for radiation-curable products in Asia. Radiation-curable materials are widely used in wood, bamboo, paper, and plastic coatings in China, accounting for over 56% of the total market.

Out of these manufacturers, BASF SE, Sartomer, and 3M Company are holding dominance, not only over technology but also in terms of production capacity and supply across the globe. Alongside, with top-end technology & facilities, tier 1 players contribute significant share at the global level.

What are the sales projections for RCPs through 2031?

How did the global RCPs market perform in the last 5 years?

What is the latest market development related to radiation cured products?

Product diversification for application of radiation curable coatings by top players such as Allnex is one among the many trends being observed this space.

What is the primary reason driving the sales of radiation cured products?

Increased purchase of furniture and advanced solutions being offered for usage of radiation cured products in wood coatings have been driving sales of RCPs.

What are the latest trends in the radiation cured products market?

How much share does tier-1 manufacturers of radiation cured products hold?

Which countries are key demand generators for RCPs?

What does the North American radiation cured products market reveal?

What is the anticipated growth rate for the South Asia & Oceania market during 2021-2031?

What do sales statistics for South Korea & Japan convey?

This business in South Korea and Japan is set to expand at 6.5% and 5.8% CAGRs, respectively, with both countries cumulatively accounting for 51% share in the East Asia market.