Overall, the market landscape is poised to yield an absolute dollar opportunity worth US$ 406.4 Million by 2032. Sales of rugged server systems for military and aerospace applications will continue to flourish, with a documented CAGR of 6.1% from 2015 to 2021.

Moreover, dedicated servers will continue to remain the primary type, likely to register a CAGR worth 5.3% from 2022 to 2032. North America will remain at the forefront, generating an opportunity worth US$ 329.3 Million during the forecast period.

The rising penetration of big data technologies, cloud computing, and other advanced technologies has prompted rugged server providers to transform services to a whole new level. As per market research and competitive intelligence provider Fact.MR, the market witnessed a staggering 6.6% CAGR from 2015 to 2021. As enterprises strive to attain a competitive edge, rugged servers are a necessity.

Consistent up-gradation of rugged servers to provide a seamless user experience is the need of the hour. By incorporating avant-garde breakthroughs, service providers are not only able to reduce operational costs, but also enhance their returns on investment. Furthermore, changing compliance and governance requirements are also widening the scope of the market growth.

In the future, as more businesses rely on rugged servers they are continuously innovating their approaches, ushering efficiency, enhancing quality, and improving client experience. Whether it is to migrate, transform or build, deploying the right application strategy can work miracles. From 2022 to 2032, the rugged servers market is forecast to grow nearly 2x.

The rising importance of the mobile workforce and the need to access information anytime, anywhere has led enterprises to adopt rugged servers which in turn is boosting the growth of this market.

Increasing investment by the government for the development of the latest technologies to maintain their competitive edge over other companies has resulted in an increasing demand for rugged Servers which further fuels the growth of this market.

High expenses related to deploying these servers and data security concern at remote locations limits the growth of the market in the forecasting period. As they are utilized in severe conditions and are frequently deployed in remote areas, automatic security procedures are required to protect against theft, malfunction, accidents, and malicious assaults.

Rugged servers are also prone to hacking and virus attacks that majorly result in the loss and misuse of valuable information and adversely affect industrial operations by disrupting the overall security mechanism. Security is the major concern for the processing and manufacturing industries. Thus rising data privacy and security concerns may hinder the market growth.

Influenced by high costs and the threat of data theft, several small-scale industries are keeping away from leveraging rugged server services. Organizations and industries are not completely capable to offer optimal performances because of the high administration and maintenance costs.

However, cost-cutting solutions and technological advancements have influenced the growth in the market size. It is very necessary to maintain a balance between these things to get positive growth in the rugged servers’ market share. 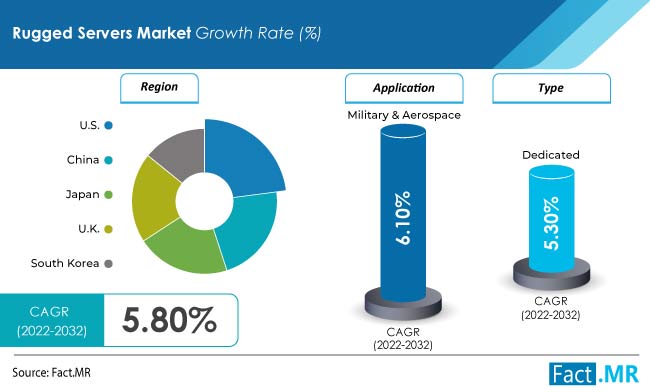 What is the Growth Outlook for the Rugged Servers Market in the U.S?

The growing need for digitalization and IoT widens the growth Opportunities

According to Fact.MR, demand for rugged server market in the U.S is likely to expand at a 5.5% value CAGR until 2032, forecast to yield an opportunity worth US$ 137.4 Million. Demand is further expected to be valued at US$ 329.3Million by the end of the said forecast period.

Growth is attributed to the extensive digitization of professional workspaces to streamline workflow and enhance productivity. With the emergence of industrial IoT and digitization, research and development activities and high-end advancements in the US and Canada will increase the demand for rugged servers market in the region.

Also, the rising demand for improved process flexibility and enhanced efficiency, minimizing the operation and maintenance costs in discrete industries, and harmonized production processes for effective supply-chain management are adding to the global rugged servers market growth over the forecast period. Furthermore, increasing defense spending is the major factor responsible for anticipated growth in this regional segment during the forecast period.

Will China emerge as an Attractive Rugged Servers Market?

The rugged servers market in China is poised to yield a dollar opportunity worth US$ 27.7 Million from 2022-2032, anticipated to expand at a CAGR of 5.3%. Furthermore, the country is anticipated to reach a valuation of US$ 68.9 Million by the end of the said forecast period. Extensive migration towards cloud-based business models as a part of business innovations is propelling the market growth. Increased use of high technology and cloud-based services led to significant growth in the market.

Also, emerging as the pinnacle of the global digital transformation and telecommunications, China is likely to present highly attractive growth opportunities for rugged server service providers in the long –run.

Moreover, technological developments in R&D activities and the minimization of maintenance and operating costs in different sectors are anticipated during the forecast timeframe to accelerate the adoption of rugged servers in the country's industrial applications. Also, the increasing need for secure data transfer and ongoing advancements in wireless cellular infrastructure is adding to the global market growth in the region.

According to Fact.MR Military and aerospace is likely to remain the top application category, growing at a value CAGR of 5.6% from 2022 to 2032.  As these servers are designed to meet the operating temperatures, environmental conditions, and shock and vibration requirements of the most demanding environments.

In the military and aerospace, communication systems and several weapons are being connected to computers such solutions are particularly designed to deliver high performance and reliability in harsh environments.

Demand is increasing due to the requirement of maintaining data consistency across independently designed applications, orchestrating the integrated flow of multiple activities by disparate applications, and providing access to data and functionality from independent applications.

On the basis of type rugged servers are categorized into dedicated and standard servers, from which the dedicated servers segment accounts for the highest CAGR of 5.3% through the forecasted period.

As dedicated rugged servers are the most appropriate servers to work under such critical situations like critical temperatures, vibrations, or dusty conditions and are manufactured in compliance with the particular specifications associated with these applications. They are specifically used in the military & aerospace and industrial sectors. The standard servers also generated significant demand for the rugged servers market.

The global market for rugged servers is characterized by the presence of multiple vendors, aiming to offer extensive consulting and integration services to clients. Additionally, enterprises are seeking out, specialized service providers, offering solutions tailor-made to suit their business objectives. In addition, the vendors are likely to leverage up-gradation to gain an edge over other competitors in the market.

Fact.MR expected demand for the rugged server market to reach US$ 539.0 Million by 2022.

Dedicated servers will account for maximum revenue, expanding at a 5.3% CAGR

China is expected to register a 5.3% CAGR with regard to the rugged server market industry

U.K is expected to document a CAGR worth 4.8% in the rugged server market

Military and aerospace will remain most sought after, expanding at CAGR of 5.6% until 2032

As of 2021, Fact.MR estimated the rugged server market to have reached US$ 506.0 Million