Not only have outdoor sport activities such as motocross riding increased significantly in the past years, but also awareness regarding safe riding has grown substantially.

While new product launches by manufacturers are attracting more buyers towards a wide variety of motocross gear such as helmets, boots, and jerseys, to name a few, plenty of awareness campaigns and initiatives promoting safe motocross riding are further raising revenue in this industry.

As the trend is likely to persist, leading global players operating in North America, Asia Pacific, Europe, and other main regions are expected to witness impressive rise in requirements.

A latest study by Fact.MR offers an exhaustive overview of the global motocross gear market, along with the latest trends, demand-supply trajectories, and significant driving factors for the forecast period of 2021 to 2031. The report also details the impact that the COVID-19 pandemic has had on this industry.

Growing requirement from motocross riders coupled with advancements in manufacturing infrastructure have significantly catered to the growth of the motocross gear market in the past years.

Despite getting battered with the onset of the COVID-19 pandemic in 2020, the industry is recovering fast, creating new opportunities for market players. Surge in demand for various protective gear such as armored shorts, boots, helmets, and others has substantially raised the revenue of manufacturers during the last 5 years from 2016 to 2020.

Furthermore, increase in expenditure by governments and individuals on safety & precautionary measures for motocross riding and related sectors is further raising market value. According to Fact.MR, the global motocross gear market is forecast to expand at over 6% CAGR through 2031.

With the rise in cases of accidents with high fatality rates, motocross riders are becoming more cautious. As a result, demand for helmets, boots, and other protective motocross gear is rising fast.

Additionally, initiatives taken by governments and various organizations to boost awareness regarding safe motocross racing are favoring manufacturers in this industry.

Recently, the Off-Highway Motor Vehicle Recreation of the Government of California launched the ‘Dirt Bike Safety Training’ initiative in order to spread awareness among dirt bikers and motocross riders.

Such initiatives are working in favor of stakeholders operating in the motocross gear industry.

What are the Key Challenges Faced by Market Players?

Additionally, the motocross sports industry suffered a setback due to the outbreak of the novel coronavirus in 2020.

However, with the motocross sports industry getting back on track and manufacturers gaining momentum, the motocross gear industry will experience impressive expansion over the coming years. 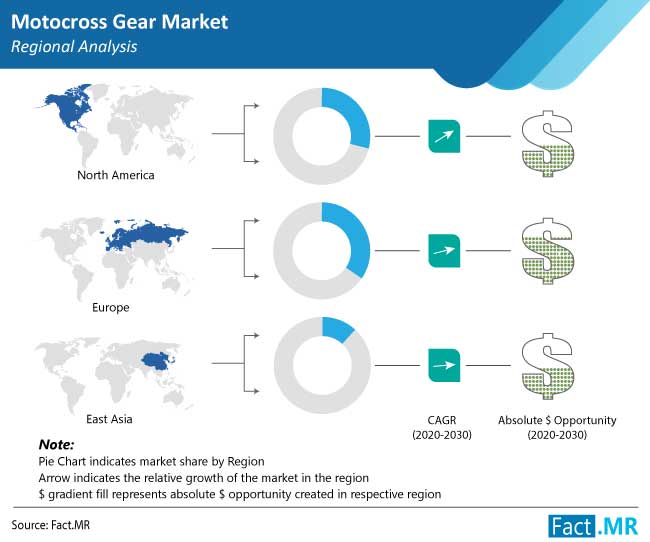 Why is the United States Highly Lucrative for Motocross Gear Manufacturers?

The United States is the dominating country in the world’s largest motocross gear industry, North America, and is expected to lead over the forecast period. Increase in number of motocross riders coupled with advancements in manufacturing hubs is propelling growth in the country.

Not only does AMA lay out consistent rules and guidelines that make racing fairer and safer, the AMA Government Relations Department fights for motocross riders’ rights on a national level, while supporting local racing.

While such training programs have significant contribution in inspiring youngsters to participate in motocross racing activities, it also indicates higher growth scope for motocross gear manufacturers in the U.S.

Germany is presently leading in the world’s second-largest motocross gear market, Europe, owing to rise in inclination towards motocross racing among men, women, and kids alike. Increase in adoption of riding and protective gear is another driving factor in the Germany motocross industry.

According to a report titled “The Motorcycling Community in Europe”, published by the European Commission (EC) on 30th April 2015, the proportion of female motorcycle riders in Germany is 15%, much higher than other European countries, and is expected to rise further.

For instance, the MXGP of Germany FIM Motocross World Championship, European Motocross Championship, ADAC MX Masters (German National MX Championship) are some of the popular motocross racing competitions in Germany. This scenario is raising the requirement for motocross gear in the country.

Why are Potential Manufacturers of Motocross Gear Attracted to China?

China, being the epicenter of the world’s fastest-growing motocross gear market, Asia Pacific, is expected to expand rapidly, creating lucrative opportunities for key players in the market. Surge in demand for various riding and protective motocross gear such as jackets, jerseys, boots, and helmets, to name a few, is catalyzing the sales of motocross gear suppliers in China.

Increase in the number of motocross training institutes, racing competitions, and equipment manufacturers is expected to keep China highly lucrative through 2031.

This is leading to growing inclination towards motocross riding activities in China, which is why, motocross gear suppliers are targeting the country in order to increase their sales footprint.

Will Japan Remain a Heavyweight for Motocross Gear Suppliers?

Backed by highly developed manufacturing hubs and advanced motocross industry, Japan is in the spotlight for motocross gear manufacturers. Rise in awareness regarding racing safety protocols and growing requirement for riding and protective motocross gear are fuelling sales in Japan.

According to a report published by the National Centre for Biotechnology Information (NCBI), in Japan, nearly half of the injuries reported during racing activities are from motocross racing.

Furthermore, a lot of motocross racing competitions take place in Japan every year, such as the All Japan Motocross Championship (JMX), and others.

Also, various companies have launched motocross tracks locators in Japan, in order to efficiently track motocross racing activities in the country. These factors together are raising the demand for motocross gear in Japan.

Why is Requirement for Motocross Riding Gear Surging?

Riding gear such as jackets, jerseys, and pants/shorts are basic requirements for comfortable riding, and hence, is leading in the market in terms of product. As increase in demand from professionals, trainers, and others tends to persist, riding motocross gear is set to exhibit hegemony throughout the forecast period.

Another key segment in this category, which is gaining rapid popularity, is protective gear such as armored jackets, chest/roost protection, armored shorts, boots, and helmets.

Which Sales Channels are Popular in this Space?

Currently, franchised stores and specialty stores are dominating the global motocross gear landscape, and are anticipated to sustain their positions during the forecast period. Franchised stores have a lot of advantages such as-

Other key segments in this category, fuelling the sales of manufacturers, are direct-to-customer channels and third-party online channels.

Is Demand for Motocross Gear Higher among Men?

Though motocross racing is a widely popular activity among both, men and women, the number of men riders is higher than females. Increase in demand for motocross gear from men, followed by women, is projected to change the market outlook considerably over the coming years.

According to a report titled “Motorcycle Use in England”, published by the Government of the United Kingdom, around 90% of motorcycle trips made and distance travelled were by men, as in 2016. This also gives a glimpse to the proportion of females interested in motocross racing. As this rate is set to rise further over the coming years, motocross gear manufacturers are expected to be highly benefited.

With the competition getting fiercer, key players in the global motocross gear market are diversifying their products in order to target a broader range of potential consumers. For instance,

Which are the top companies operating in this industry?

Which are some of the lucrative markets for motocross gear?

The United States, Germany, China, Canada, the United Kingdom, Japan, and a few others are lucrative markets for motocross gear, and are expected to dominate throughout the forecast period.

Which is a highly sought-after motocross gear?

Presently, riding gear is the mostly sought-after in terms of product, and is expected to keep leading over the forecast period of 2021 to 2031.

Which are the key sales channels for motocross gear?

Presently, key sales channels of motocross gear are franchised stores, specialty stores, and others, which will aid demand growth over the coming years.

Automotive Towbar market is expected to grow at a CAGR of 3.6% by the end of the forecast period 202...