Fact.MR, a market research and competitive intelligence provider states the sales of fat replacers will likely surpass US$ 2 Bn by the end of 2021. Increasing consciousness regarding obesity along with the use of carbohydrate based fat replacers is surging the demand for fat replacers.

In addition, increasing demand from North America and Asia Pacific is influencing the sales of fat replacers. The fat replacer market has been increasing at a faster rate than the overall market, which has risen at a CAGR of 6% and will garner a market value of US$ 3.5 Bn in the forecast period.

Manufactures of fat replacers are focusing on improving the quality of fat replacers that would retain moisture and texture in different food products. Furthermore, companies are also venturing into providing alternatives that completely delete fat with the help of plant based products.

Thus, due to the reasons mentioned above, the sales of fat replacers are expected to surpass US$ 3.5 Bn by registering a CAGR of 6% in the sales indicator period 2021-2031.

These products are likely to use a combination of fat and oil and find large application in products including chips, baked goods, and snack foods. Furthermore, majority of the new products with low-fat content made using fat replacers are awaiting approval by Food and Drug Administration.

Increasing number of dairy product manufacturers are replacing expensive butterfat with vegetable fat owing to its cost-effectiveness and numerous health benefits. Manufacturers are focusing on improving structural quality and taste of fat replacers for use in dairy products.

These fat replacers are used in a wide range of dairy products such as cheese, butter, and whipping cream. They are not only cost-effective but are also resulting in high adoption in developing regions. This, in turn, is increasing the sales of fat replacers. Furthermore, low-fat dairy beverages are also gaining traction across the globe with the introduction of new flavors and rise in health consciousness among consumers owing to increasing instances of obesity.

In addition to growing consumer demand for low-fat food products, governments across the globe are introducing new regulations on consumption of foods containing fat, along with setting a limit on daily consumption of fat.

Various policies that regulate and restrict trans fatty acids have been introduced in some countries. Switzerland, Denmark, and some states in the US have adopted regulatory approaches to controlling trans fatty acids in food products.

Most of the countries in Western Europe have taken initiatives to reduce fat content from factory-made foods. Resulting in the majority of established food companies under intense pressure to use substitutes such as fat replacers.

How is Industry-Institution Collaboration Developing Demand for Potential Fat Replacers?

Food industry and institutions are working together to develop new fat replacers, owing to some challenges in existing fat replacers in the market. A study conducted by Zhejiang Key Laboratory for Agro-Food Processing found that pectin recovered from citrus canning wastewater during preparation of canned citrus can be a potential fat replacer in ice-cream.

The study also found that adding pectin in ice-cream can increase viscosity, hardness and decrease meltdown of ice-cream. Various studies have also shown that replacing fat with inulin as fat replacer resulted in a significant reduction in fat content in food products.

Inulin, a carbohydrate-based fat replacer is finding large application in dairy products including plain and flavored yogurts, and cheese. Food processing industry is also moving towards using Aloe vera as a fat replacer in bakery products increasing its functional properties.

Aloe vera gel as a fat replacer in cake has also shown similar results in terms of texture, color, and softness to the cake prepared with 100% fat. Thus, research and development of new products in the fat replacer market is likely to drive growth and use in the food industry worldwide in near future.

Moreover, government regulations for inclusion of sweet and fat based products in everyday food is playing a key role in the usage of fat replacers in a variety of ready-to-eat and ready-to-cook foods. Thus, a market value of over US$ 1.3 Bn is anticipated for the North American fat replacer market. The region is estimated to account for more than 45% market share.

According to OECD iLibrary, more than 15% of the population is obese in the Asia Pacific. Increase in inclination towards fast food along with a sedentary lifestyle is playing a crucial role in the increasing obesity rates. Countries like China and South Korea are facing the problem of increasing obesity.

In addition, dependence on convenience food and instant food is the key reason for the increase in obesity in the region. In addition, increasing obesity rate in China has pushed the government of the country to adapt to fat replacers in everyday food that would not harm the health of the people.

Furthermore, heart related problems and no physical exercise has increased the demand for fat replacers. Thus, according to Fact.MR, Asia is expected to hold nearly 25% market share by registering a CAGR of 6% in the assessment period. 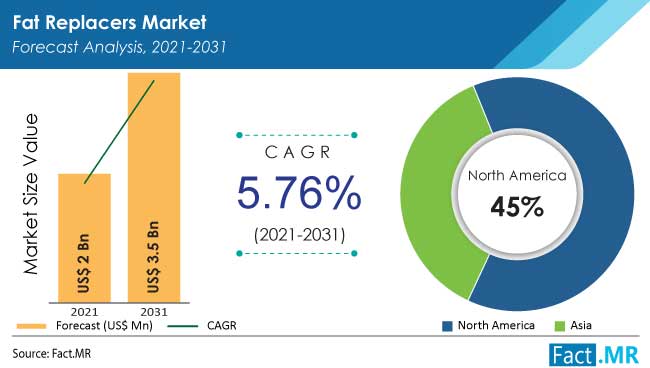 Consumption of bakery and confectionary products has increased over the past few years. This is due to the convenient packaging and easy availability of the same across the globe. In addition, most of the bakery products such as croissants, pastries or cakes are consumed as desserts on daily basis. This, in turn, has increased the consumption of fat and sugar in people.

As awareness regarding fat consumption has increased, inclination towards healthier alternatives has increased too. Thus, people are preferring bakery products that are made with fat replacer ingredients. Owing to the factors mentioned above, by application, bakery and confectionery products are expected to possess more than 40% market share for fat replacers.

Expanding globally is one of the main focus areas of players in the fat replacer market. Hence, there has been a rise in partnerships and mergers and acquisitions activities.

The fat replacer market is expected to reach nearly US$ 3.5 Bn by 2031

Carbohydrate based fat replacers is expected to hold more than 50% market share for fat replacer.

The fat replacer industry is expected to possess nearly 25% market share throughout Asia.

*99 figures and 123 tables includes by FactMR