Fact.MR has recently compiled a report on one such imperative food packaging technology that complements consumer convenience – cook-in-bags.

The report provides analysis and forecast on the cook-in-bags market for the period between 2018 and 2028.

Intelligence on size of the cook-in-bags market has been delivered in terms of value (US$ Mn) and volume (Thousand Units).

Macroeconomic indicators, coupled with an outlook on the cook-in-bags market at country, region, and global level has also been incorporated in the report.

Important market dynamics that include growth influencers, impediments, trends, and lucrative avenues have been scrutinized and elaborated.

The report offers an exhaustive evaluation on the cook-in-bags market, in the form of qualitative insights, verifiable projections, and historical data.

Projections offered in the report are derived with the aid of assumptions and proven research methodologies. The report serves as an all-inclusive repository of intelligence and analysis on key facets of the cook-in-bags market.

A cook-in-bag is utilized for roasting meat, or other food products in an oven. Culinary parchment or durable plastics generally form the radical materials used for manufacturing cook-in-bags.

Trapping moisture in the food during cooking, and retaining the same, is a fundamental feature of a cook-in-bag, which further serves the purpose of blasting.

Cook-in-bag variants are generally produced by using polyester, or heat-resistant nylon, to prevent their melting at cooking temperatures and food spoilage. 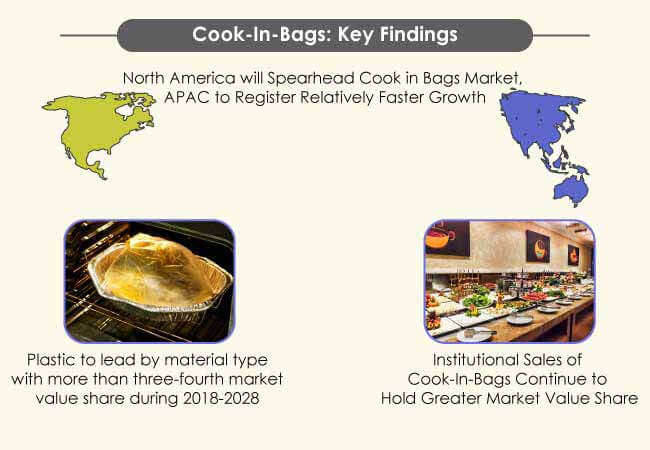 This has further spurred convenient consumption solutions, and cook-in-bags are no exception.

Time-intensive commute, and long hours of work have left consumers with less time for cooking meals, and their incessant search for easily accessible and simple cooking solutions have augured well for sales and development of cook-in-bags.

The fundamental requirement of preserving shelf-life, quality, texture, and taste of food products packed in cook-in-bags, has further led prominent vendors to focus more on new design developments to realize effective preservation of the product’s characteristics.

High temperature cook-in-bags are fast gaining traction in institutional platforms, where pre-cooked or marinated raw meats are packed in these bags.

In terms of revenues, preeminence of institutional cook-in-bag sales is poised to prevail, however, retail sales are foreseen to record a relatively faster growth through 2028.

Faster growth of retail cook-in-bag sales can be primarily attributed to the absence of dioxin and bisphenol-A (BPA), and imperative features such as vacuum seals.

Recent changes in institutional arrangements, labor migration, and demographic behaviors have consequently led to a surge in number of single-person households worldwide, which in turn has crafted profound avenues for several business, with food packaging products, such as cook-in-bags, being one of the key areas.

Cook-in-bag meals are becoming increasingly popular among this chunk of population, as they facilitate individuals in faster meal preparation along with desired taste preferences.

Value-based Dominance of Plastic as Raw Material will Persist, Despite Declining Preference among Manufacturers owing to Environmental Concerns

The report envisages plastic to remain sought-after among materials used for manufacturing cook-in-bags, mainly owing to its cost-effectiveness and convenient processing technologies.

Plastic-based cook-in-bags are poised to hold over three-fourth market revenue share during the period of forecast.

A slight decline in the revenue share has been estimated for plastic-based cook-in-bags during 2018 to 2028.

This can be attributed to government norms that limit boiling time of cook-in-bags to 20 minutes, as further heating or boiling will result in melting of polyethylene and plastic residue in food products.

Additionally environmental concerns regarding plastic will further remain a key demand deterrent for these cook-in-bag variants.

Other imperative materials, such as aluminum foil, and sub-segments of plastic including polyethylene and polyesters, have also been studied in detail.

North America Endures as Most Lucrative Market for Cook-in-bags

North America continues to spearhead the cook-in-bags market, in terms of revenues, owing to the economic and technological vigor, coupled with growing penetration of modern retail in the region.

Over two-fifth share of the cook-in-bags market will be accounted by sales in North America during 2018 to 2028.

However, growth in APAC is set to be significant, surpassing cook-in-bags’ sales conversion rates observed in all the other regional segments through 2028.

Analysis on other regional segments such as Europe, MEA and Latin America has also been offered in detail. 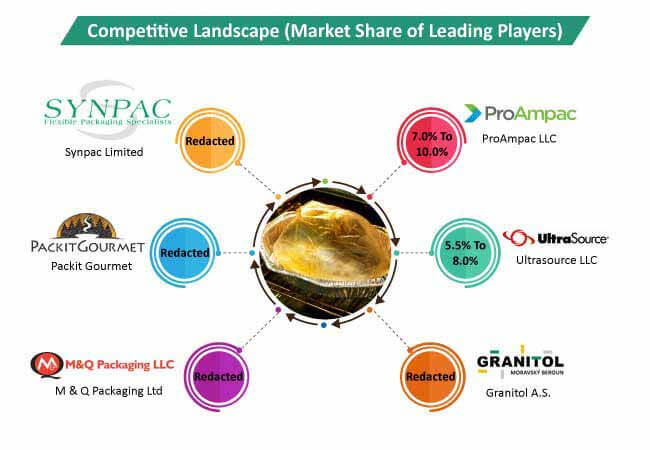 The report has profiled key players, who are significantly contributing to growth of the cook-in-bags market, which include Synpac Limited, Packit Gourmet, M&Q packaging ltd, Granitol A.S., UltraSource LLC, and ProAmpac LLC.

These players are resorting to new product development strategies for bolstering their position in the cook-in-bags market, which in turn has resulted in the proliferation of eye-catching cook-in-bag variants with better functionalities.

Important information, such as business strategy, market share, and product development strategy of market players, has been included in the report.

Relative strength of the market players across regional markets, and information on their major manufacturing location has also been encompassed in this insightful research study.

Apart from aforementioned players, the report profiles and offers an detailed analysis on other prominent companies operating in the cook-in-bags market.

An exhaustive analysis has been delivered on the cook-in-bags market in this report.

An exemplary amalgamation of primary and secondary research approaches, coupled with data mining via in-house proprietary tools, has helped the analysts in arriving at accurate market figures and numbers.

Intelligence on the cook-in-bags market has also been gleaned from product catalogues, corporate annual reports, and SEC forms.

The report on the cook-in-bags market follows a systematic approach, which comprises the market profiling, developing list of respondents, data collection & validation, insights, analysis, and formulation of discussion guides.

A three-step quality check followed by Fact.MR analysts had aided in peer-review of data via independent thought leaders, triangulation of data, and internal validation. 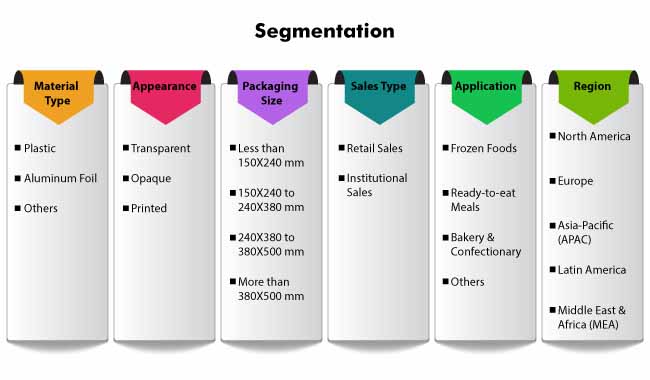 Analysis and forecast on the cook-in-bags market have been delivered on the basis of material type, appearance, packaging size, sales type, application, and region.

Key materials analyzed include plastic, aluminum foil, and others, which are primarily used for production of cook-in-bags.

Appearance attributes of cook-in-bags that are preferred by end-users and highlighted in the report are transparent, opaque, and printed.

The cook-in-bags market has also been examined on the basis of sales type that include institutional sales and retail sales, and applications that include frozen foods, ready-to-eat meals, rice & cereals, bakery & confectionary, and others.

Along with the provision of region-wise forecast, the report also offers analysis on the cook-in-bags market in the U.S., Canada, France, Germany, the U.K., India, and China.

Sub-categories of key segments such as plastic materials – polyethylene, polyesters, and nylon, and frozen food applications – meat, poultry, sea food and others have also been analyzed.

Cook-In-Bags Market Scope Of The Report

It provides historical data of 2013 along with estimated data for 2018, and forecast data up to 2028 in terms of revenue (US$ Mn) as well as volume (Thousand Units).

The report also incorporates macroeconomic indicators, coupled with an outlook on cook in bags for the global market.

It includes growth drivers and restraints of the cook in bags market and impact of these aspects on the regional segments during the forecast period.

This report also engulfs the study on current issues concerning consumers and opportunities for cook in bags products.

It also comprises value chain analysis. In order to provide readers of the report with an all-inclusive view of the market, detailed competitiveness analysis on key market players, and their strategic overview has been included in the report.

The dashboard exerts a detailed comparison of cook in bags manufacturers on parameters that include product offerings, total revenue, and key strategy.

Through a detailed study of the market, our analysts have observed that there is a tendency for end users to shift from conventional cooking to cook in bags, which is likely to result in several market entrants.

Also, low cost of cook in bags production is likely to bode well for growth of the market in the near future.

The report further states that the use of cook in bags in frozen foods is likely to result in a lucrative market opportunity for producers of cook in bags targeting this segment.

The cook in bags market has been segmented on the basis of material type, appearance, packaging, sales type, and application.

All these market segments have been analyzed in detail, and imperative intelligence such as market share comparison, revenue comparison, and Y-o-Y growth comparison has been offered.

For the estimation of revenue, regional average prices were obtained through quotes from numerous cook in bags manufacturers, exporters, and distributors.

Every key material used has been considered, while potential applications have been elucidated in terms of secondary sources as well as feedback from primary respondents.

Some of the key data points collected for modeling approach include total number of cook in bags produced, and average production yield.

Company-level market share is derived based on usage of cook in bags in respective end use applications. The market projections are propounded on the basis of constant currency rates.

The report imparts a detailed competitive analysis, and profiles of key participants underpinning growth of the cook in bags market.

A number of primary as well as secondary sources have been leveraged by the analysts while developing this report.

Secondary sources include publications and company annual reports. Comprehensive interviews have been conducted by our analysts, and the intelligence and insights obtained have been used for validating the information gained through secondary research.

The report also includes a description of assumptions and acronyms utilized for research purposes. Data gathered has been validated using the triangulation method, to offer useful quantitative and qualitative insights on the cook in bags market.

For ascertaining the market size on the basis of volume and value, revenues generated by leading players, coupled with their production capacities are taken into consideration.

Backed by a proven & tested research approach, the report offered necessary information on the cook in bags market.

Qualitative aspects gained from industry experts and opinion leaders have also been adhered by the analysts while developing this insightful report on the cook in bags market.

Secondary research is leveraged for ascertaining the overall size of the cook in bags market.

A short market viewpoint offered in the report elucidates the macro-economic aspects that influence the growth of the cook in bags market, which include worldwide demand for food & beverages and ecommerce trends impacting the consumer goods sector.

Global pricing analysis, restraint analysis, and opportunity analysis on the cook in bags market have also been incorporated in the report.

This report serves as an authentic resource of intelligence on the cook in bags market, enabling the readers to fact-based decisions on future direction of their businesses.

The Rise of Intelligent Packaging