As per latest industry analysis published by Fact.MR, the global dishwashing products market was valued at around US$ 18 Bn in 2020, and is expected to reach a valuation of US$ 35 Bn by 2031, rising at a CAGR of 6%. Demand for dishwashing liquid is projected to accelerate at a CAGR of 5% across the assessment period of 2021 to 2031, and remain the highest-selling form.

As per Fact.MR – a market research and competitive intelligence provider, the global market for dishwashing products thrived at a CAGR of over 3% from 2016 to 2020 to reach US$ 18 Bn.

The market is anticipated to experience high growth opportunities as consumers continue to increase demand to speed up their utensil cleaning operations. Rising demand for dishwashing products could also be attributed to growing investments in foodservice businesses around the globe.

Growth of the market is predicted to increase in sync with that of the culinary industry. Heavy use in residential and commercial kitchens could set the tone for the significant growth of the dishwashing detergent market.

Considering these factors, the global market is projected to witness decent growth over the coming years, registering a CAGR of 6% to top US$ 35 Bn by 2031.

Usually, dishwashing products can be found in liquid, gel, or powder composition. Dishwashing products are typically creations of a blending of surfactants, often accompanied by increasing amounts of foam or lather when in use to hand-wash wares such as cutlery, glasses, cooking utensils, cookware, plates, and/or bowls.

Usage of dishwashing products can be found in both, the residential and commercial sectors. Each sector has significant competition between corporations vying to gain a stable hold in the industry.

Although Western Europe has seen increasing penetration of dishwashers in households, demand in the dishwashing products market is projected to rise steadily. This could be due to improved economic conditions and rising demand for convenience and time-saving options among consumers.

Households in the U.K., Turkey, and other European countries could continue to switch from hand dishwashing to highly energy-efficient dishwashers that consume less water.

Automatic dishwashing tablets could be increasingly used in the U.S. dishwashing products market. Research and Development team of the big giants in the area of dishwashing products is working to develop such dishwashing detergent which is free of harmful chemicals without impacting its cleansing capacity. And give the best experience to its end-user in the form of germ-free cleaned utensils.

What are the Key Challenges Faced by Dishwashing Product Manufacturers?

Dishwasher detergents are made from chemicals that can cause health issues and impact the environment. Chemical used in these products harm the skin in course of time, resulting in dry skin and damaging the innermost layer of the skin, which is impeding demand of dishwasher detergents.

Liquid detergents find an escape from the narrow openings of the dishwasher and form suds that damage the internal parts, viz. pipes, motors, and filters of dishwashers. Established manufacturers offer products at a premium price; this can also be a restraint to the growth of the market.

Escalating cost of raw materials used such as organic substances, chemicals, and others act as a hampering factor for market growth.

Which Regional Market is the Most Lucrative for Suppliers of Dishwashing Products?

The Asia Pacific region leads with more than 40% of the share in the global market for dishwashing products. Increasing of government initiatives in ensuring kitchen hygiene and cleanliness of various food outlets play a significant role in driving consumption of dishwashing products.

For instance, according to a Hindustan Times article published in June 2018, the Food Safety and Standards Authority of India (FSSAI) has trained staffers from various government canteens to supervise the maintenance of cleanliness and hygiene in canteens.

Furthermore, escalating number of brands in this region offering quality products at a reasonable price also has a crucial contribution to the growing demand for liquid dishwashing products and dishwashing cakes/bars, thereby increasing sales of dishwashing bars & dishes cleaners across the region.

The market in Asia Pacific is anticipated to expand at a significant growth rate during the forecast period due to rising usage of eco-friendly dishwashing products and dishwashing powder products in China, India, and Japan.

Rising sales of dishwashing detergents in the U.K, growing demand for dishwashing bars in Canada, and eco-friendly dishwashing products in Australia also supplement the growth prospects of the cleaning products market. 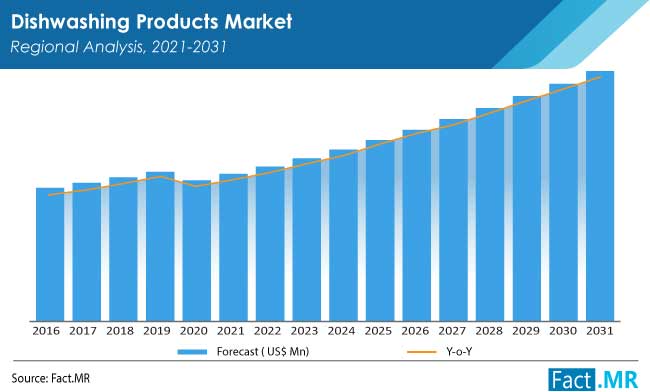 What is the Demand Scenario for Dishwashing Products in the U.S.?

The market in the U.S. was valued at over US$ 13 Bn in 2020. The U.S. institutional cleaning detergents market for dishwashing applications is likely to register significant gains over the coming years due to high product adoption across numerous end-use sectors such as healthcare, commercial offices, restaurants, and educational institutions, among others.

Institutional cleaning activities are known to be the largest consumers of surfactants, which are the main components used in an assorted range of specialized dishwashing powder products in the U.S., especially where food hygiene, food safety, as well as technical performance are essential features. They are also used in bulk commodity formulations that are specifically used in commercial window, floor, and surface cleaning, along with general-purpose cleaning in the country.

The Chinese economy is maintaining high speed growth, which has been stimulated by consecutive increases in industrial output, imports & exports, consumer consumption of gel dishwashers and liquid dishwashers, and capital investments for over two decades.

Why is the Popularity of Dishwashing Liquids Rising Rapidly?

Dishwashing liquid accounts for a share of 50% in the market. Dishwashing liquid, also known as dishwashing soap, dish detergent, and dish soap, is a detergent used to assist in dishwashing. It is usually a highly-foaming mixture of dyskinesia with low skin irritation for cleaning washing, glasses, plates, cutlery, and cooking utensils in a sink or bowl.

Although dishwashing liquids may secure a higher share of the global dishwashing products market, soaps and other offerings in the solid form are projected to gain traction over the coming years.

Which Sales Channel of Dishwashing Products is Fueling Market Growth?

Technology is considered to be a vital factor for the growth of the consumer goods industry. The proportion of sales through e-commerce platforms may reach a tipping point in the forthcoming years. Manufacturers are striving to shift their large consumer bases towards online platforms, thereby enabling them to customize products and conduct transactions on branded websites.

An increase in sales of tablets dishwashing products and gel dishwashing products through online distribution channels, especially on company-owned websites of manufacturers and on various e-Commerce websites such as Amazon, Walmart, and various other local e-Commerce portals across the globe, is anticipated to create immense opportunities for manufacturers and suppliers of dish detergents.

Manufacturers and suppliers also provide attractive offers and give instant discounts to customers which is likely to fuel demand for synthetic dishwashing products and dishwashing powders on various e-Commerce websites in the near future.

How Has COVID-19 Impacted Demand for Dishwashing Products?

The coronavirus pandemic brought the whole world to a standstill. Business activities registered a downturn in the form of dwindling sales due to reduced production and demand. Owing to lockdowns implemented across various countries, national and international transport was hampered, which impacted the market.

Amidst the coronavirus outbreak, many customers worldwide are working from home, cooking more, and ordering less. This has led to rise in demand for dishwashing products. Indicating a change in consumer demand and buying patterns during the COVID-19 pandemic, latest trends in natural dish washing products are positively impacting the progress of the market.

How much is the global market for dishwashing products currently valued at?

The global dishwashing products market is currently worth more than US$ 18 Bn.

At what CAGR did the market expand over the past 5 years?

What are key factors driving demand for dishwashing products?

Changing consumer preferences and increasing environmental regulations are projected to provide an opportunity for dishwashing product suppliers over the coming years.

What is the market outlook for dishwashing products in China?

Dishwashing product sales in China are forecasted to reach over US$ 20 Bn by 2031.

Which are the top companies providing dishwashing products?

Which region will largely contribute to the growth of dishwashing products revenue?

The Asia Pacific region, with 40% of the global market share, will largely contribute to the growth of dishwashing products revenue.

What are Germany dishwashing product sales insights for 2021 to 2031?

Dishwashing product sales in Germany are set to increase at a CAGR of 4% through 2031.

Which segment of dishwashing products dominates the global market?

Dishwashing liquid accounts for a share of 50% in the market.

Which are the top 5 countries driving demand for dishwashing products?

The U.S., China, U.K, Canada, and Australia are expected to drive most of the demand for dishwashing products.

What is the expected growth rate of the market for dishwashing products over the next 10 years?

Urinary Tract Infection Treatment Market is expected to reach US$ 12.9 Bn by 2031. Demand for compli...