The rising number of clinical trials and increased spending on this research are the primary drivers of market expansion. According to European Medicine Agency statistics, there are now (2020) 37,293 clinical studies registered in Europe. Furthermore, according to the World Health Organization, the number of registered trials in South East Asia was approximately 92% in 2019 and around 66% in the Eastern Mediterranean area.

Animal models are regarded as a critical tool in clinical research investigations for predicting human data. It aids in identifying drug pharmacodynamics and pharmacokinectics. Furthermore, the European Federation of Pharmaceutical Industries and Associations said that the total revenues of the pharmaceutical business globally were around US$ 852 Million.

From 2015 to 2021, the worldwide animal model market grew at a 4.8% CAGR. Animals and humans have a similar biological and physiological structure. Animals have a shorter life cycle, yet they share a high level of genetic similarities. In comparison to humans, controlling the animal habitat is straightforward and uncomplicated.

Animal models are increasingly being employed in biomedical research to aid in the development of innovative treatment strategies for a wide range of ailments. Using animal models allows for a better knowledge of various diseases as well as the efficiency of medications in treating them. As a result of these circumstances, the need for animal models in the healthcare sector has increased significantly.

Researchers are using innovative experimental methodologies to clarify the biology of certain illnesses in order to create new and efficient animal model systems. Researchers are recommended to test medications in model organisms as well as mice strains with varied genetic origins while developing novel treatments for complicated disorders.

The market is growing due to the increasing use of animal models in drug development and the rising need for efficient animal models. Based on the aforementioned reasons, the global animal model market is expected to grow at a CAGR of 5.5% between 2022 and 2032.

Animal Models will be required for Vaccine Testing and Development Deployment

With the use of computational biology and bioinformatics approaches for creating innovative vaccine candidates, significant progress in animal reduction and replacement has been observed in recent years. Despite this, the main objective for using a vaccination is to assist the immune system in identifying infections and eliciting a response.

The growing demand for vaccine testing and development is paving the way for animal model demand, propelling market expansion to new heights. Furthermore, animal models are often employed in biomedical research to develop novel treatment strategies for illnesses. The goal of gaining a greater knowledge of a condition, which also aids in the faster comprehension of therapeutic efficacy. 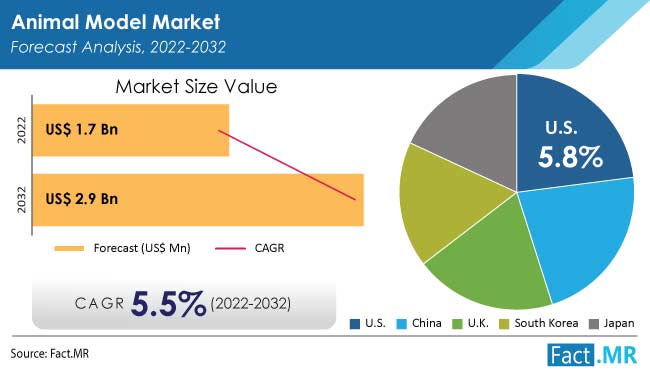 Strict restrictions and criteria governing the use of animal models in research studies may have a detrimental influence on the growth of the animal model industry. In recent years, tight legislation and standards for animal protection and welfare have resulted in limited research techniques and restrictions on the use of animals for various scientific objectives in some countries.

What is the Potential of the US Animal Model Market?

According to Fact.MR, development in experimental services by biotech and pharmaceutical corporations via drug discovery, an increase in CROs' use of animal models, and an increasing focus on tailored pharmaceuticals, the United States is anticipated to be a leading country in the animal model market.

As a consequence of the increasing number of clinical trials and huge investments in these studies, the pharmaceutical analytical testing market in the United States is expected to rise at a stellar CAGR OF 5.8%

What is the Animal Model Market Scenario in China?

The Chinese market has a significant value share of the global market and is expected to maintain its dominance over the forecast period due to an increase in the number of programmes and rising government spending on overall R&D of pharmaceuticals using animal models, as well as the implications of mouse clinical trials (MCTs) for more accurately estimating outcomes.

Moreover, the market is predicted to grow as a result of continuing developments in animal models, the availability of sophisticated healthcare systems, and a significant increase in demand for advanced healthcare facilities.

Furthermore, animal model demand is expected to grow as major manufacturers focus on expanding their regional presence in order to achieve a significant market share. Owing to these factors, the Chinese market for animal models is anticipated to grow at a CAGR of 5.7% during the forecast period.

Which Species is most likely to Boost Animal Model Activities?

Growing use of rat models to investigate a wide range of complex disorders, increased demand for rat models in biomedical research to better understand contemporary health concerns, and advances in gene-editing techniques, are all driving market growth.

Furthermore, greater use of personalized medicine, continuous government support in the form of funding and subsidies, and increased use of the rat model in drug research and discovery will further fuel prospects.

Which End User is most likely to Drive Demand for Animal Model Systems?

Deployment to be Maximum across Academic and Research Institutions

The government is increasingly intervening in academic and research institutions to set uniform standards for animal models. The importance of animal research in advancing healthcare and medical science has been widely established, garnering support from researchers. Rapid advances in innovative technology have made animal models simple and useful.

Significant illness incidence rates, as well as adverse therapeutic effects, have prompted the use of animal models to ensure human safety. Furthermore, increased government participation in research institutes for the creation of standard protocols connected with animal models would fuel market growth.

To expand their customer base and strengthen their industrial position, key animal model system suppliers are working on strategic acquisitions, mergers, collaborations, and partnerships. Recent investments by big corporations have offered opportunities for the sector to grow internationally. Some key developments are as follows:

As of 2021, Fact.MR estimated the animal model market to have reached US$ 1.6 Billion

By 2022, Fact.MR expected demand for Animal Modesto reach US$ 1.7 Billion

China is expected to register a 5.7% CAGR with regard to the animal model industry

Japan is expected to document a CAGR worth 4.5% in the Animal Model market

According to Fact.MR, rat-based animal models are expected to account for more than 40% revenue

Academic and research institutions are anticipated to grow at a CAGR of 6% over the assessment period.

*99 figures and 156 tables includes by FactMR