The global animal drug compounding market has reached a valuation of US$ 2 billion and is forecasted to expand at a CAGR of 8.2% to end up at US$ 4.42 billion by 2032.

Animal drug compounding entails combining, mixing, or ameliorating ingredients to develop a formulation for the specific need of an animal or a small group of animals.

Growth in the adoption of anti-infective agents in animal drug compounding will account for more than 30% of overall market growth.

In addition, the target market is crucial to fill the gaps between alternative options for veterinary treatment and less availability of licensed drugs for animal medication.

Officially sanctioned drugs are not readily available and compounded medications are a better option to cure a variety of ailments. For instance, chewable tablets that are not acceptable for use in animals such as cats or exotic pets are commercially approved goods in specific dosage forms and are advised for use in certain animal species. In a similar vein, certain commercially available drugs have a taste that some animals find repulsive. Compounding is favored in this situation, especially for medications that are challenging to administer.

As a result, the global market for animal drug compounding is set to surge ahead at a CAGR of 8.2% through 2032, says Fact.MR.

From 2017 to 2021, the global market for animal drug compounding registered a CAGR of 6.3%, and according to Fact.MR, a market research and competitive intelligence provider, it is projected to exhibit high-value growth at 8.2% CAGR through 2032. 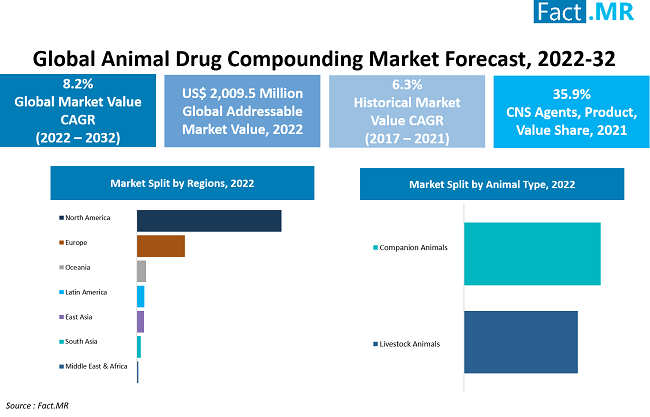 Why is the Popularity of Animal Drug Compounding Surging?

Animal care is typically a very expensive affair that is out of reach for households with low incomes. Animal owners typically prefer to go to accredited compounding pharmacies since they provide better services at a reasonable price.

Additionally, the lack of favorable reimbursement for veterinary therapy limits the availability of generic veterinary medications. A majority of branded medications sold on the market for the treatment of animals are expensive. Due to these circumstances, pet owners are more likely to choose compounded pet medications rather than branded ones owing to their affordability, accessibility, and no requirement for a prescription.

“Growing Prominence of Pharmacists’ Training for Compounding for Animals”

Recently, there have been initiatives to integrate more veterinary-specific training, which was not traditionally included earlier by many pharmacy schools in their curricula. However, pharmacists, through independent continuing education, receive a majority of veterinary pharmacy-specific training, including compounding.

Additionally, in recent years, the compounding market has undergone a full transformation due to an increase in owner approval of the practice. A few aspects that are favorably affecting the target market include a greater understanding of therapeutic indications for various drugs, increased availability and use of animal health insurance, and improved animal welfare activities.

What Do Animal Drug Compounding Providers Need to Watch Out For?

While compounded drugs for animals have shown benefits, a large and documented risk of drug antagonism has led to reducing the efficacy of one or more drugs. Moreover, the safety of compounded drug formulations is not guaranteed by the FDA (Food and Drug Administration). Such a lack of regulatory standards for animal care has a negative impact on animal welfare programs.

The aforementioned issue could pose a threat to the growth prospects of animal compounded drug manufacturers, although they are resorting to strong strategies to get around these obstacles and seize the market opportunity.

Why are Animal Drug Compounding Providers Thriving in the U.S.?

The United States animal drug compounding market is currently estimated at US$ 1.16 billion and is expected to top US$ 2 billion by 2032.

For the past decade, the United States has dominated the market for animal medicine compounding in North America and is anticipated to continue doing so going ahead as well. Sales in the nation are being fueled by expanding manufacturing and pharmaceutical industries as well as an increase in demand for various animal medications among those who own pets.

A crucial factor promoting innovation in the local market is the country's strong regulatory culture for the veterinary industry. Additionally, over the years, ongoing pharmacy R&D and an increase in veterinarian collaborations to bridge the therapeutic demand of various animal species have solidified the income prospects of the local market.

Germany is the top European nation for the compounding of animal drugs and its dominance is anticipated to continue during the projected period as well. The pharmaceutical industry in Germany is responding to the rising demand for diverse animal medicine compounding items such as anti-infectives, anti-inflammatories, and others.

In addition, Germany dominates as a result of governmental actions and growing public awareness regarding animal welfare issues. Germany's market for animal drug compounding is valued at US$ 126.7 million in 2022.

Anti-infective drugs will generate huge opportunities for market players during the forecast period.

Antibiotics, parasiticides, and vaccines are among the several anti-infective products. These products have several benefits, including the ease with which they can be administered, their value in preventing various infections, their high effectiveness in critical care, etc., all of which present a significant opportunity for drug compounding solution providers.

With an increase in vulnerability among animals regarding bacterial infection, the demand for the same has also surged. Furthermore, with the global economy on the way up, the anti-infective sub-segment is predicted to expand rapidly at a CAGR of 10.3% through 2032.

Today, a diverse range of dosage forms and delivery systems are available across the world to provide for the care and welfare of animals. The oral route of administration is widely used in both, companion animals and livestock animals, owning to various factors such as being safe, reliable with fewer side effects, and many more.

All the above factors are providing a huge growth trajectory to the oral administration route segment in the target market, which is set to create an absolute $ opportunity of US$ 2.19 billion by 2032.

We are expecting a very competitive environment in the global market for animal drug compounding. Key industry participants are launching several new products to survive the fierce competition.

What is the global animal drug compounding market size?

The worldwide market for animal drug compounding is valued at over US$ 2 billion in 2022.

How is the market expected to fare going forward?

Global demand for animal drug compounding is anticipated to reach US$ 4.42 billion by 2032-end.

At what rate did demand for animal drug compounding increased historically?

Which type of animal drug compounding is most demanded?