With surge in demand for silicone release coatings across diverse applications such as tapes & labels and hygiene products, manufacturers are experiencing lucrative opportunities across regions.

Additionally, requirement for both, silicone and non-silicone release coatings in the medical industry is opening new paths for stakeholders in this industry. While the spotlight remains on countries such as the United States, China, Japan, and Germany, plenty of other lucrative markets are playing a vital role in increasing market revenue.

Fact.MR’s latest report on the release coatings market provides the trends in high-growth markets across the world, while incorporating the impact of COVID-19 on its sales and growth.

This report offers readers highly analytic insights on release coatings, with emphasis on shifting patterns of demand & supply, and approaches taken by manufacturers and stakeholders. The study also elaborates the competitive landscape along with key strategies taken by top players and new entrants.

The global release coatings industry has exhibited impressive growth during the past years, while increase in application in various tapes and labels has further boosted sales.

With advancements in the medical sector and steady growth of the hygiene & personal care industry, manufacturers of release coatings have witnessed high demand during the last 5 years from 2016 to 2020.

In order to supply a variety of silicone and non-silicone release coatings to the industrial, personal care & hygiene, and medical sectors, manufacturers are strengthening their infrastructure along with large investments.

For instance, Wacker Chemie AG has extended its operational activities over more than 25 production sites across Europe, Asia, and the Americas, in order to increase its sales footprint, while its revenue reached close to 5 Bn EUR in 2018.

As a result, the release coatings market in gaining rapid traction around the world, and according to Fact.MR, the market is forecast to expend at around 4.5% CAGR through 2031.

How is Growing Demand from Medical Sector Boosting Market Growth?

As a result, increase in requirement from the medical industry is substantially bolstering the growth of release coating manufacturers.

According to a report titled “Global Spending on Health- A World in Transition”, published by the World Health Organization (WHO) in 2019, global health spending is transitioning fast, with a rapid increase in domestic spending, both, out-of-pocket and publicly funded, and this, in turn, is impacting the global medical industry positively.

As stated in the report, two years into the sustainable development goals era, global spending on health continues to rise - it was US$ 7.8 trillion in 2017, or about 10% of Gross Domestic Product (GDP) and US$ 1,080 per capita - up from US$ 7.6 trillion in 2016. This points towards the upcoming opportunities awaiting players dealing in release coatings.

What are the Key Challenges Faced by Release Coating Manufacturers?

Manufacturing, storing, and transitioning of release coatings require modern technologies, expert handling, and costly set-up, which often work as restraints to manufacturers. Additionally, end-user demand for release coatings continues to be challenged by factors such as-

Also, the outbreak of COVID-19 slowed down the growth of the release coatings industry earlier in 2020. However, the industry is getting back to its feet, creating ample of opportunities for key market players. 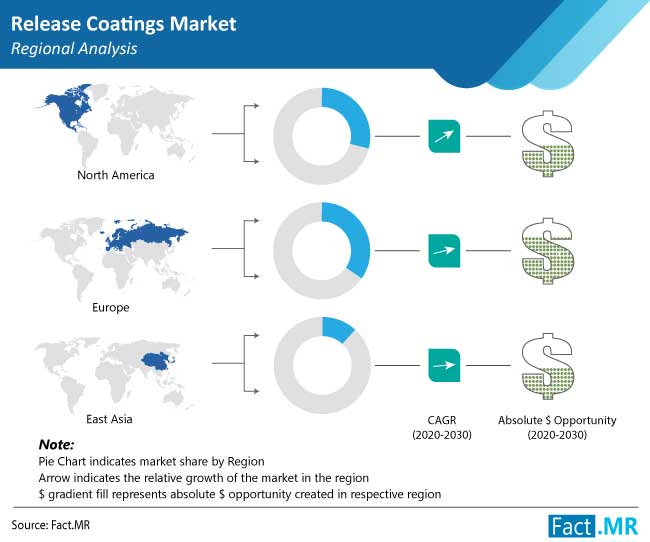 Why is China Lucrative for Release Coating Manufacturers?

China is the leading country of the world’s largest release coatings market - Asia Pacific, and is forecast to remain dominant through 2031. Highly advanced hygiene & medical industries and fast-paced growth of manufacturing hubs are bolstering growth in China.

According to a report published by the Export Government of China, on 30th October 2019, China’s healthcare industry featured continuous, robust growth and dynamic regulatory change in 2018.

As stated in the report, China’s medical device industry reached US$ 78.81 billion, an increase of 22% from 2017, while total sales of pharmaceutical and health products reached US$ 219.91 billion in 2018, growing 11.3% year-on-year. This gives an estimate of the lucrative opportunities awaiting manufacturers of release coatings in the country.

What’s Fuelling Sales of Release Coatings in the United States?

As stated in a report titled “Industrial Production and Capacity Utilization- G.17- The Fed”, published by the Federal Reserve Government on 17th February 2021, industrial production increased 0.9% in January, while manufacturing output rose 1% in the U.S. As per data revealed in this report, mining production advanced 2.3%, while capacity utilization for the industrial sector increased 0.7% point in January to 75.6%, a rate that is 4% below its long-run average in the United States. As release coatings have huge requirements in the industrial sector, suppliers in this industry are experiencing higher sales across the U.S.

How Big is the Growth Scope in Germany?

Germany, being the epicenter of the Europe release coatings industry, is expected to exhibit hegemony during the forecast period. Rise in demand from medical and industrial sectors coupled with growing adoption of silicone release coatings in producing tapes & labels is spurring growth in Germany.

According to a report titled “Germany: Industrie 4.0”, published by the European Commission (EC), ‘Germany’s Industrie 4.0 Policy Initiative” has been strengthening the industrial sector in the country since the past decade, which includes -

Such initiatives are raising the market value for release coatings in Germany.

Why Japan a Lucrative Market for Release Coatings?

Japan has emerged highly potential and lucrative for players offering release coatings, and will continue to be so throughout the forecast period. Highly advanced industrial sectors and well-developed manufacturing infrastructure are fuelling release coating sales in the country.

As per the report, import of goods from Japan topped US$ 142 billion, as service imports neared US$ 37 billion, for a total of US$ 179.1 billion in 2017, up 4.5% from the previous year. Release coatings are extensively used in providing tablet coating solutions, producing enertic coatings, and others in the medical and pharmaceutical sector. This depicts the growing opportunities for release coating suppliers in Japan.

Why is Application of Release Coatings in Tapes & Labels the Highest?

Presently, tapes and labels is the leading segment in the global release coatings landscape in terms of application, and is predicted to lead over the forecast period as well.

Release coatings are crucial components of Pressure Sensitive Adhesive (PSA) products such as tapes and labels, and are coated onto the rear side of PSA tape backings in order to provide the desired tape roll unwind force. As a result, demand is growing fast from this segment of application.

Other key segments in the global release coatings market in terms of application are hygiene, industrial, and medical, which are all complementing sales growth.

Why is Silicone Most Sought-after in Terms of Material?

Currently, silicone is the most-use material in release coatings. According to Fact.MR, this segment is subject to further growth over the coming years. Silicone release coatings are highly desired as they have a lot of advantages, such as-

Non-silicone release coatings are expected to remain another key segment in the near future.

The global release coatings market is gradually getting more competitive, while thriving on key players. In order to capitalize on the high market potential, key market players are focusing on quality and quantity of products. For instance,

Which are the top companies manufacturing release coatings?

Some of the top companies providing release coatings are DowDupont Inc., Evonik Industries AG, and Hitac Adhesives and Coatings Inc.

Which are some of the lucrative markets for release coatings?

China, the United States, Germany, Canada, the United Kingdom, Japan, and a few others are lucrative markets for release coatings, and are expected to dominate throughout the forecast period.

Which material accounts for higher sales of release coatings?

Presently, silicone is the mostly sought-after in terms of material, and is expected to keep leading over the forecast period of 2021 to 2031.

Which are the main applications of release coatings?

Presently, key applications of release coatings are tapes and labels, hygiene products, and industrial, which will aid demand growth over the coming years.

The breathable antimicrobial Coatings market to witness a positive growth trend with a CAGR of 8.9% ...