Of the overall paints & coatings industry, cool roof coatings captured around ~3% share as of 2021, says Fact.MR- a market research and competitive intelligence provider.

Upsurge in the adoption of green building codes by developed and developing countries across the globe is anticipated to propel the cool roof coatings demand. Growing concern towards energy consumption and carbon emission encourages governments to support green buildings establishments. The affirmation factor is anticipated to open up the market for cool roof coatings over the forecast period.

According to the latest research on cool roof coatings by Fact.MR, the market value of the cool roof coatings increased at around 6.8% CAGR historically, from 2017 to 2021, wherein, countries such as the U.S., China, Japan, France and Italy held a significant share in the global market.

The cool roof coating offers reduced cooling energy costs and increases comfort level by keeping temperature fluctuations inside the building in check. The Cool Roof Rating Council (CRCC) estimates average energy savings from cool roof coatings to be in the range of 7% to 15%, albeit energy savings vary based on geography and climate.

With growing concerns about energy savings and reducing air pollution, the market for cool roof coatings is forecast to expand at a steady CAGR of close to 7.4% over the coming 10 years.

What are the Prominent Driving Factors of the Cool roof Coatings Business?

As the housing and commercial construction activities continue to soar, the effect of “urban heat island” is getting worse against the backdrop of dark colored structured and streets, and lack of air-conditioned and green space.

This has further supplemented energy demand and relevant costs in structures of commercial and residential sectors alike.

However, several cool roof coating programs are being carried out worldwide, which focus on mitigating the heat trapped by working with community partners.

NYC Cool Roofs, Toronto’s Eco-Roof Incentive Program, Repeal and Replace of Green Roof Law in Denver, and Initiative of India’s national government on sustainable cooling through National Cooling Action Plan, are some of the key examples of cool roof programs being carried out worldwide currently.

Such initiatives for cool roof coating allude to a transformative trend to battle climate change and global warming.

What Makes US a Prominent Market for Cool Roof Coatings?

The US cool roof coating market holds over 26% of the global market share in terms of value. In the United States lot of energy is used in homes and buildings. Additionally, buildings account for over 40% of the overall US energy consumption and a similar proportion of greenhouse gas emissions as well.

Growing awareness towards building energy consumption along with the execution of the Leadership in Energy and Environmental Design (LEED) green building certification initiative, is anticipated to drive the US cool roof coatings demand.

Why China is one of the fastest Growing Nation Globally in terms of Cool Roof Coatings Consumption?

China is the fastest-growing country in terms of cool roof coating consumption, owing to the increasing acceptance of green building codes.

Additionally, the rapidly growing population across the country leads to increase construction activities primarily residential. Increased spending on infrastructure is one of the most prominent reasons behind the rapid construction industry growth in China.

However, the country is truly focused on building cool roof infrastructure over the past half-decade. The primary aim behind the shift is to promote the climate-appropriate use of and carbon saving cool surfaces including roofs throughout the country.

To mitigate the urban heat islands, cool roofs requirement has been growing at a fast pace in China. Chinese scientists are truly focused on analysing the exact reason for the urban and rural temperature variation over the past half-decade.

Based on the affirmation factor, China cool roof coatings market is anticipated to grow at a CAGR 8.2% over the forecast period and valued at over USD 1.3 Billion by 2032 end. 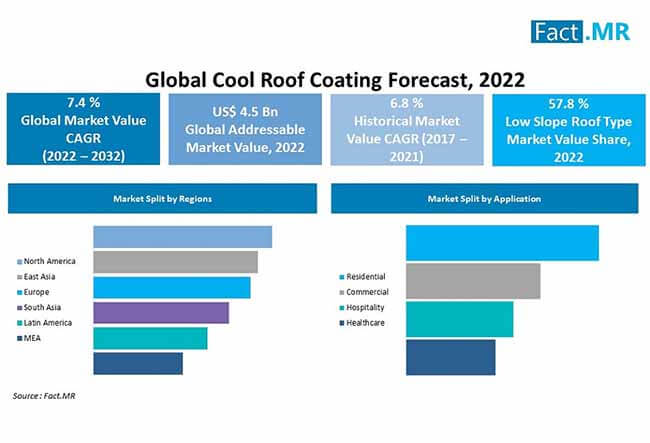 As per the U.S. Environmental Protection Agency (EPA), nearly 80% of energy conservation in a single-story building can be obtained through its roof.

It further states that for urban areas, the roofing constitutes approximately 70% of surface area in urban settlements. Therefore cool roof coatings can play a major role in energy conservation through initiatives by local authorities to carry out cool roof coating programs in the cities.

As silicone cool roof coatings reflect over 90% of sunlight, and work as isolation between the roof substrate and the incident sunlight, these are fast gaining prominence in the market.

Why Low-Slope Roof Type is the Most Prominent for Revenue Generation?

Demand for cool roof coatings for low-sloped roof application continued its positive momentum over the past half-decade and is anticipated to dominate the global market with a significant growth rate of 7.8% over the forecast period.

Owing to the extensive use of low-sloped roofs in commercial and industrial buildings globally, the demand for cool roof coatings tends to increase at a steady pace. Increasing penetration of low-sloped roofing systems is primarily driven by the growing concern regarding the importance of green building construction in both industrial and commercial areas.

Of total consumption of cool roof coating across the globe, low-slope type roofs consume over 59% and are anticipated to keep on dominating the market over the forecast period.

These cool roof coating manufacturers including Nutech Coatings, and Kansai Paints Co. Ltd, have consolidated their position in Asia-Pacific and Europe. Advertisements and marketing campaigns are key expansion strategies of the Tier 2 players, for creating brand awareness among end-users.

Silicon cool roof coatings is talk of the town.

North America accounted for over 31% of the global cool roof coatings value share in 2021.

*141 figures and 95 tables includes by FactMR