The tweener racquets have huge demand in the tennis racquet market which is foreseen to capture more than 40% of the overall market share globally also, it is expected to drive the market with a CAGR of 2.7% over the period 2022 to 2032.

The historical outlook of the tennis racquet industry has shown minimal market growth of 1.3% over 2017-2021 owing to several factors such as less popularity among other sports, and nominal career opportunities. Moreover, due to expensive equipment and training costs, the prevalence of the sport was very less. However, government initiatives and individual spending on sports activities have created a path for market growth.

Tennis's emergence as a recreational sport among populations in developed and developing economies has substantially influenced the market's growth trajectory. Additionally, the growing participation of youngsters in sports and their interest in seeking to join tennis club teams has propelled the product demand. Also, professional tennis as a career option is opted for by many young emerging sports activists.

Hence, the aforementioned factors have greatly benefited the development of the tennis business and the demand for a tennis racquet, and it is anticipated to support the market growth throughout the ensuing years.

Furthermore, the high demand for the product from various end-users and technological advancements will emphasize broad opportunities for the market players. To accomplish the demand requirements, manufacturers are incorporating innovative technologies like as bending zone, aero modular, and woofer to make tennis racquets more durable and efficient.

In attribution to the above mentioned facts, the global tennis racquet market is estimated to grow at an opportunistic CAGR of 2.8% over the period 2022-2032 to reach the valuation of US$ 1,013.5 Million in the year 2032.

Over the 2017-2021 historical period, the global tennis racquet market registered a CAGR of 1.3% and according to the Fact.MR, a market research and competitive intelligence provider, the market is projected to exhibit growth at of 2.8% CAGR between 2022 and 2032. 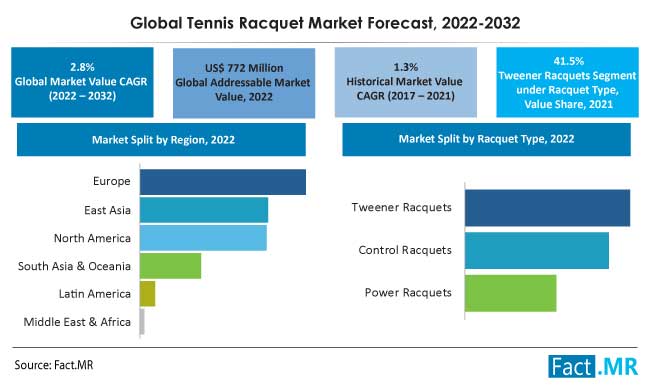 Market share analysis of tennis racquet is based on racquet type and region is provided in a nutshell in the above image. Under the racquet type, the tweener racquet sub-segment will dominate with 41.4% market share in 2022.

Growing health issues across the global population have created a need for fitness activities that accelerate participation in sports activities including tennis. Additionally, tennis as a recreational sport has been acquired by a population of almost every age group across the globe owing to its advantages. One such type is cardio tennis, which is a group workout that helps to cut calories in a rational manner. Rigorous adoption of cardio tennis amongst fitness enthusiasts is predicted to drive the market toward positive growth.

Moreover, the increasing number of sports training complexes and academies has garnered an incremental growth opportunity. Also, after the global pandemic of COVID-19, the population’s attention towards maintaining their physical health has unexpectedly increased which hasten the demand for a tennis racquet.

Over the years, governments and sports federations have been at the frontline of growth. Enhanced sports enrollment, with a priority on tennis, has been notably seen in nations including India, the United Kingdom, and China.

For example, in November 2018, the Indian government launched the “Khelo India-National Programme” for the growth of domestic sports activities. These policies are likely to broaden the range of tennis activity and, as a result, the usability of racquets in the near future.

Similarly, The Lawn Tennis Association (LTA) stated in 2019 that hundreds of additional indoor tennis courts will be built in communities across the United Kingdom over the next ten years, benefiting more than three million players.

Hence, the rigorous government support for the enhancement of the sports industry will give significant momentum to the market growth during the assessment period.

What Do Tennis Racquet Manufacturers Need to Watch Out for?

The purchasing limit of tennis racquets is depending upon the player's enthusiasm and as tennis is the least popular sport among the global population high product price may hamper the customer base.

Additionally, currently, the entire world is facing the challenge of inflation which showcases the increase in the product price. As global inflation lowering down the purchasing power of potential customers, the target market will also get affected to a great extent in some nations. High product costs may become a challenge for the mid and low-level earning population.

Apart from product price, the high cost of training centers will limit the participation of youth players in tennis sport. Hence, the above-mentioned factors are expected to hamper the market growth to a higher extent.

How government initiation and increasing sports involvement will escalate the tennis racquet market in Europe?

Europe dominates the global market for tennis racquets by holding a value share of 32.5% in 2021. The popularity of the sport in the region is combined with significant government assistance to increase youth involvement in tennis, which is expected to drive the expansion of the market throughout the anticipated period.

For instance, initiatives by the regional government such as the “European Week of Sports” program prioritize involving every European citizen regardless of age, fitness level, or background. This effort aims to enhance public physical activity awareness as well as knowledge of regular exercise. This kind of public welfare initiative in the European provinces will offer an opportunistic growth of the market by an absolute $ opportunity of US$ 91.9 Million from 2022-2032.

Why Is East Asia expected to be Highly Lucrative for the Market?

East Asia is likely to expand exponentially during the forecast period, with a compound annual growth rate of 4.2% from 2022 to 2032. The rigorous growth of the youth population in the region and their growing acceptance of tennis as a professional career opportunity will tend to drive the market in nearing future. Moreover, an increase in the number of tennis courts and training centers in the region will upsurge the demand for tennis racquets in the region.

Additionally, an increase in the prevalence of the population towards fitness and healthcare along with a rise in per capita disposable income in the region is estimated to drive the market for a tennis racquet.

What explains the high demand for Open String Pattern Racquets?

The greater acceptance of open string racquets is due to higher launch angle, greater spinning efficiency, and more powerful reflex response. Hence, owing to the aforementioned benefits, sports activists are preferred using an open string pattern. The segment will show an incremental $ opportunity of US$ 188.8 Million over the year 2022-2032.

Why The Popularity of Tweener Racquets Is High Amid Tennis Players?

The segment racquet type is diversified under three major racquet among which the tweener racquets are widely accepted and preferred by the emerging as well as professional tennis players. The dominance is owing to its performance advantages such as moderate weight, medium head size and superior impulse and vicious responsive ball rotation abilities.

The global tennis racquet market is highly fragmented in nature as it is occupied by both global as well as regional market players. However, it is slightly moving towards consolidation as most of the emerging new tennis enthusiasts and professional tennis players stick to a particular brand. Market leaders are continuously focusing on the upgradation of their product offerings to achieve better sports performance and durability.

To maintain their hold on the market, manufacturers are continuously collaborating with the regional sports authorities to achieve expected product sales. Inorganic strategies such as mergers and acquisitions are also being adopted for portfolio and business expansion.

The global tennis racquet market is estimated to be valued at US$ 772 Million in 2022.

Worldwide demand for tennis racquet is anticipated to reach US$ 1,013.5 Million by 2032-end.