Window films market is expected to grow 1.7X between 2019 and 2029. Rising automotive production will lead to an increase in the demand for window films. Development of energy efficient infrastructure is pushing the demand for window films that block excessive sunlight and aids in energy efficient cooling. On the back of these factors the global window films market will register a steady CAGR during the forecast period. Market players are focused on expanding global footprint by engaging partners in training programs and building a stakeholder community. Growth in this market is directly influenced by developing economies with increasing disposable incomes of millennial consumers that initiates a ripple effect from automotive, commercial, to residential applications.

Automotive applications garner more 1/3rd market share, this can be attributed to surging logistics demand from industries and increasing commercial automobile fleets. Window films in automotive enhance the strength of windows and increase sun protection amidst rising peak temperatures globally. The sun control segment is projected to grow 1.6X during the forecast period. Residential and commercial applications collectively account for over 58% of the market. Manufacturers gain traction from these application industries due to product efficiency in sun blocking, decorative appeal, and resultant privacy. Among these demand generators, commercial application present lucrative opportunities on the back of multiplying investment via upgrading corporate offices and establishing entrepreneurship ventures. 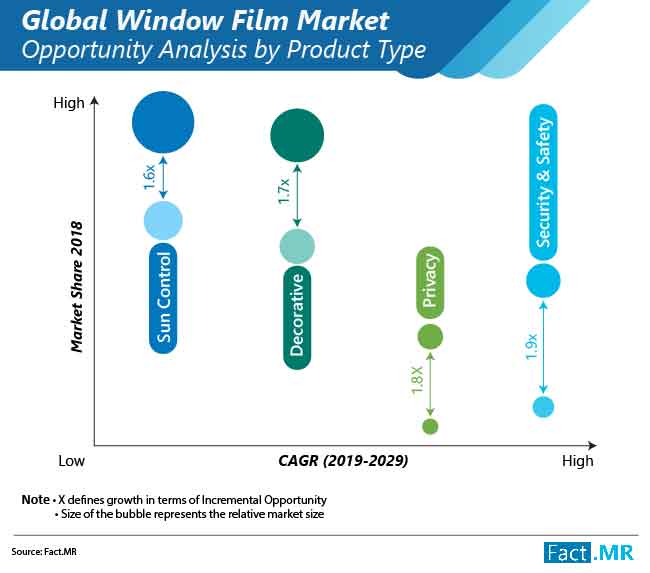 Europe at Forefront of Global Sales

Europe emerges in the vanguard of the window films market with a market share of more than 1/4th of total market value. Collaborative associations such as European Window Film Association (EWFA) remove friction surrounding the use of window films citing the rise in quality, safety, and security standards offered by window films. For instance, the General Directorate of Road Transport Service, a statutory agency in the Albanian government passed a new regulation that allows window films to be deployed in automobiles. EWFA regularly publishes technical papers, lobbies window film related regulations, and bridges the gap between manufacturer interests and European government bodies. Rampant demand for electrical automobiles from early adopters in this region accompanied with a conducive environment propels European window films market. 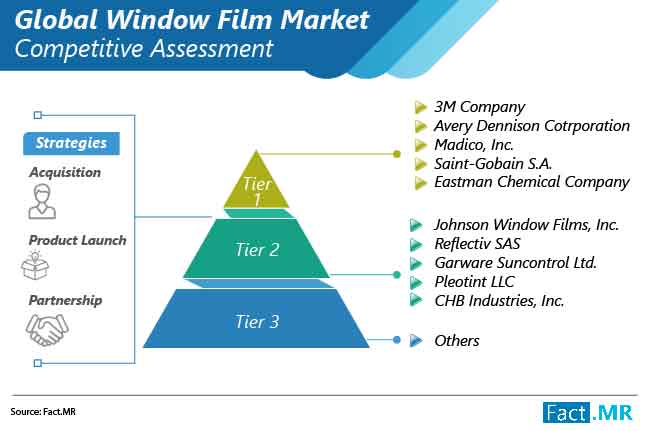 The report also comprises the study of current issues with end users and opportunities for window film. It also contains value chain analysis, including the key market participants. To provide users of this report with a comprehensive view of the market, we have included a detailed competitive analysis about the key players involved in the market and strategic overviews. The dashboard included in the report provides a detailed comparison of window film manufacturers on parameters such as total revenue, product offerings, and key strategies. A list of key companies operating in the window film market provided in the report adds to the credibility of this exhaustive research study.

The global window film market is segmented on the basis of product type, application and region.

This taxonomy and the detailed TOC prepared are confidential and intended exclusively for the individual or entity with whom it is being shared. Reading, disseminating, distributing, or copying this to any party other than addressee(s) is unauthorized and prohibited.

Country-specific assessment on demand for window film has been provided for each regional market, along with the market size valuation and forecast price point assessment, price index and impact analysis of key regional and country-wise dynamics, which were obtained through quotes from numerous window film manufacturers, experts, and suppliers. Y-o-Y growth projections have also been offered on all regional markets incorporated in the report. Moreover, future trends, growth prospects, and other possibilities related to the market have been answered in the report.

The report provides company-level market share analysis, which has been derived on the basis of the company’s annual sales and segmental revenue in all the target end-use industries. The market has been forecasted based on constant currency rates. The report provides detailed competitive and company profiles of key participants operating in the global window film market. Some of the major competitors operating in the window film market are 3M Company, Avery Dennison Corporation, Madico, Inc., Saint-Gobain S.A., Eastman Chemical Company, Johnson Window Films, Inc. and others.

A number of primary and secondary sources were consulted during the course of the study. Secondary sources include Factiva, Morningstar and Hoovers, and company annual reports and publications. Comprehensive interviews have been conducted by our analysts, and the intelligence and insights obtained have been used for validating the information gained through secondary research. The report also includes a description of assumptions and acronyms utilized for research purposes. Data gathered has been validated using the triangulation method to offer useful quantitative and qualitative insights into the window film market.

A short market viewpoint offered in the report elucidates the macro-economic aspects that influence the growth of the window film market, which includes global GDP growth rate, various industries growth rate, such as chemical & materials, automotive, construction and others. This report serves as an authentic resource of intelligence on the window film market, enabling the readers to take fact-based decisions on the future direction of their businesses.