Metallized Films Market By Metal (Aluminum, Other Metals), By Type (Polypropylene, Polyethylene Terephthalate), By End Use (Packaging, Decoratives) & By Region - Global Forecast 2022 to 2032

Global metallized film sales are currently valued at around US$ 2.44 billion. The metallized films market is anticipated to increase at a CAGR of 4.3% to reach a market valuation of US$ 3.72 billion by the end of 2032.

The use of metallized BOPP films is a cost-effective packaging alternative for key end-user industries, and the strength and stiffness of these films make them perfect for wrapping and decoration, resulting in a surge in global metallized polymer film demand.

Metallized films are polymeric films that have both, metal and plastic properties. A very thin coating/layer of metal is coated on one or both sides of the metallized films. Because of their favourable qualities, such as reducing permeability to light, water, and oxygen, metallized films are employed in a wide range of industrial applications.

Due to favourable product qualities, the metallized films industry is dominating the overall packaging films market, drawing new manufacturers to invest in it. These films protect packed goods from environmental changes, extending their shelf life.

Because of its advantageous features and inexpensive cost, BOPP films are replacing cellophane in areas such as snack and cigarette packaging. BOPP films are available in over 1,000 different variations. Flexible packaging, gift wraps, and decoratives are all made with metallized BOPP films.

However, in terms of automation and quality of products, the projection year is expected to bring a big transformation in the product market. Many producers' current short-term goal is to make metallized films more durable and cost-effective. 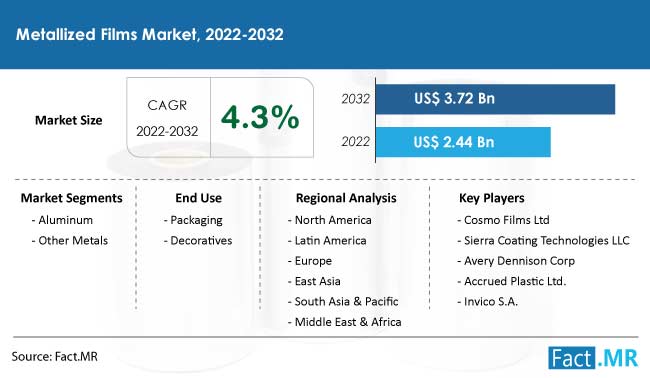 What are the Key Trends Supplementing Metallized Films Market Expansion?

According to the India Brand Equity Foundation, the country's fast-moving consumer goods market is predicted to reach US$ 220 billion by 2025, up from US$ 110 billion in 2020. Majority of FMCG products are low-cost and necessitate low-cost packaging solutions.

In this industry, metallized films are widely used to package daily consumer goods. As a result, rising investment in this area is likely to shape the sales growth of metallized films market.

Metallized films not only extend the shelf life of a product but also assist consumer goods manufacturers to differentiate their products and gain a competitive advantage. These days, metallized films can be found in graphic applications such as point of sale and signage.

Metallized films add visual attractiveness to a product while also allowing it to stand out in a crowd. Product labels and wraps are two new applications for metallized films that might entice buyers to acquire the products. Because improved branding enhances purchasing, metallized films may be exclusively responsible for increased product sales.

Various governments control the usage of metallized films in the automotive industry. Government restrictions differ from one country to the next. Metallized films put on car window glass diminish Visible Light Transmission (VLT), limiting the amount of visible light entering the vehicle.

As a result, several countries have regulations prohibiting the screening of these films for a variety of reasons, including road safety, violence, and so on.

Use of 100 percent black tint window films on all window lenses is prohibited around the world, as these films reduce the motorist's visibility and raise the risk of an accident. For safety concerns, vehicles in nations including Kuwait, Bolivia, Portugal, Belarus, Libya, Iraq, Kenya, and Pakistan should have 100 percent clear films.

These rules could limit the expansion of the metallized films business in the automotive industry.

Which is the Most Profitable Regional Market for Metallized Film Manufacturers?

By 2032, the American region, which encompasses North and Latin America, is predicted to account for a significant portion of the worldwide metallized films market.

As opposed to Latin America, the metallized film industry in North America is considered to be more mature, as the area already houses the majority of the sector's major participants.

Currently, North America and Latin America are expected to account for 35.9% and 7.2% of the global market share, respectively.

In terms of demand, Europe is the third-largest metallized films market. The market is likely to develop in the future years as the European economy recovers and sales of metallized films rise.

The Registration, Evaluation, Authorisation, and Restriction of Chemical Substances (REACH) regulate the metallized films market in Europe, which monitors and sets rules for environmental protection and preventing health dangers caused by chemicals.

Environmental laws and shifting raw material prices have a huge impact on the growth of metallized films in the European economy. Environmentally friendly products are developed by industries in this region in collaboration with companies in the United States.

How is the United State's Electronic Industry Influencing the Market for Metallized Films?

The United States metallized films market is currently valued at around US$ 790.1 million, and is anticipated to expand at a CAGR of 3.8% to reach US$ 1.14 billion by 2032.

The electrical and electronic sector in the United States is innovative, competitive, and committed to product development research and development. Silicon Valley has a significant influence on the manufacture and manufacturing of MPET films for electric, magnetic, and optical applications.

Metallized films are used in a variety of applications, including integrated circuits, semiconductors, sensors, and digital displays. As a result of the manufacturing disruption caused by COVID-19, several US-based companies are relocating their production plants to the country rather than leasing them to China.

Will the Indian e-Commerce Sectors Influencing Demand for Metallized Films?

According to the Indian Institute of Packaging (IIP), the country's packaging usage has increased by about 200 percent in the last ten years. It climbed from 4.3 to 8.6 kg per capita.

Following the introduction of food and grocery delivery apps such as Swiggy, InstaMart, and BigBasket, brick-and-mortar businesses such as Big Bazaar and DMart have launched their online sites, resulting in a shift in consumer purchasing habits.

After the launch of COVID-19, the metallized films market saw an increase in sales via online channels. Consumers can obtain meals and goods delivered without fuss through online channels, while also maintaining social distance.

The moisture barrier of polypropylene metallized film is good, but the oxygen barrier is low. This film has been metallized to improve barrier qualities and extend the shelf life of packaged goods.

This film is ideal for use in applications restricted by FDA standards due to its chemical resistance and low odour. The usage of polypropylene metallized film in packaging for products with a longer shelf life, such as food, bakery goods, snacks, and candies, is propelling the market forward.

Communication devices, timing circuits, and filter networks all use this film in the electrical and electronics industries. These are the main factors driving the glass ;?ber metallized film industry.

Why are Aluminium Metallized Films Highly Consume by the Food Industry?

Aluminium, in the metal segment, is expected to account for 60.5% of the global market share, in 2022. During the projected period, the aluminium metallized film is estimated to be the leading segment by metal.

Treats, frozen meals, confectionery and bakery products, ice creams, coffee sachets, and other products are packaged with aluminium metallized film. Stand-up pouches allow for high-quality, glossy graphics to be printed on the box, making it more appealing to customers.

Aluminium metallized film demand is predicted to rise as a result of these factors during the forecast period.

These companies are using expansion, development of new products, mergers and acquisitions, and collaboration as important growth strategies to improve their product range and geographical presence to meet the rising demand for metallized barrier films from developing nations.

What is the estimated growth rate of the global metallized films market?

What is the value of the metallized films market?

The global metallized films market is currently valued at US$ 2.44 billion and is predicted to reach US$ 3.72 billion by 2032.

Who are the key metallized film manufacturers?

What was the historical CAGR of the metallized films market?

Global consumption of metallized films increased at 3% CAGR between 2017 and 2021.

UVI stretch films market is set to witness steady growth during 2021-2031. The rising need for the p...

Wound Healing Films Market has reached a valuation of US$ 674 Mn and is forecast to climb to US$ 1.0...