A recent study by Fact.MR on wearable air conditioner market throws light on product pricing, market risks, in-detail study of technological aspects, techno-economic strongholds and other business aspects. According to the study, demand for wearable air conditioners is anticipated to increase at a volume CAGR of 15.4% over the period of 2021 to 2031, with overall shipments set to reach 200,00 units by the same year, mainly due to investments in the development of newer technologies and enhanced cooling effect provided by newer products.

Similar to other electronic appliances, the wearable air conditioner market is crowded with a huge number of Chinese players with masked manufacturing facilities. However, offerings from them fall back in accounting for a significant market share. There are many personal cooling devices available in the market being channelled as air conditioners, but in fact do not offer any such aspect.

Considerations from the demand side also provide a strong image for market reach. Rising concerns over global warming and inclination of people towards eco-friendly air conditioning systems will leave manufacturers of wearable ACs to experience fortunate opportunities over the forecast years. This also provides impetus to strong product pricing along with collective growth.

Over the past half-decade or since the beginning of wearable air conditioners being introduced into the market, strong demand for the same was experienced and is still anticipated to be witnessed over the period of 2021 to 2031. Apart from factors pushing market growth, advancements in overall technological aspects in air conditioning systems have also been laying substantial influence over market progression.

In 2020, the COVID-19 wave hit industries at all levels and scales. Prominent impact from the same has been spread across different individuals with varying disposable incomes. Moreover, wearable air conditioner supply was affected due to lockdown restrictions across countries and showcased a strong setback for market growth.

On the other side, people with high disposable income have remained consistent customers while others have cut expenses during these times. However, industries coming back to track and resumption of other economic activities have fuelled the market to gain traction over the period of Q4 2020 to Q1 of 2021. This has reduced overall impact on wearable air conditioner demand, resulting in Y-o-Y contraction of 4%.

As per Fact.MR, - a market research and competitive intelligence provider, over the forecast period, market is set to recuperate as follows, divided in 3 comprehendible periods:

Short-run: Over this period, the market is set to gain back traction after the COVID-19 pandemic effect and witness significant R&D investments.

Medium-run: Over this term, manufacturers of wearable air conditioners are anticipated to allocate high levels of R&D reserves and the market will experience a wide variety of product offerings.

Long-run: Over this term, the industry is expected to see the evolution of low-cost product offerings from various manufacturers, and is also set to draft strong demand for use by industrial workers.

Below points summarize the market over the long-term forecast period: 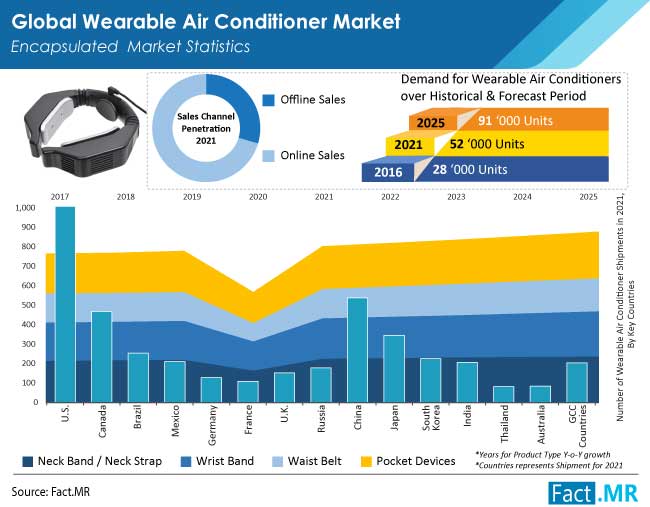 What is the Current Penetration Scenario of Wearable Air Conditioners?

The widely used working principle or technology behind wearable air conditioners is the Peltier effect. This technology discovered in the early 19th century is also being widely applied for its use across a large number of devices, ranging from freezable bras, vests, underwear, to all new technologically advanced wrist bands, neck straps, and pocket devices, which are all currently available in the market.

Now with its prospective introduction by various manufacturers, commercial-scale availability is yet to showcase significant presence. However, it has projected substantial attraction and can be observed being available on an array of options of sales channels.

Currently, Embr Labs and Sony are the brands offering wearable air conditioners through online and offline channels, luring customers by offering groundbreaking gadgets. With the idea being novel, soon, other competitors operating in HVAC are expected to join the flow to benefit from the early bird competition advantage.

Moreover, inclusion of portable air conditioners (neck fans) worn around the neck in scope opens the house for wider product types to be considered. Sales of neck band air conditioners have witnessed huge push over the past half-decade, and there exists a pool of masked manufacturers present wide across the East Asian region, leaving revenue generation from neck band and neck strap air conditioners going unnoticed.

However, brand expansion and standardization conclude the issue, bringing the market out from cache concepts being assumed while estimating the global market value.

What is the Take of Top Manufacturers on Wearable Air Conditioners across the Globe?

Over the past half-decade, blanked competition between top manufacturers across the globe has surfaced. One-on-one announcements by giant companies such as Amazon, Alphabet Inc., Walmart, and others to become employee-centric companies have influenced market growth.

The steps taken and planned to be taken towards providing safer, healthier, and efficient work space leaves behind the opportunity for manufacturers to benefit by designing easy adoptable personal air conditioning systems.

Market tension among lead actors such as Sony, Embr Labs, and a few others being on the very cusp of inception, has left the anticipation entirely on findings made by each analyst while studying the market.

How are Wearable Air Conditioner Sales Faring across the U.S.?

Key actors positioned in U.S. such as Embr Labs offer top-end products working on the Peltier effect. The country holds a prominent share at the global level, and wrist band air conditioner demand from the nation contributes significant influence on overall market growth.

With some of the world’s largest employers, the U.S. signifies the prominence it holds over the forecast period. Employers, on a clean chit race to provide employees with an efficient and healthier work environment, will project highly fortunate opportunities for market players over the assessment period of 2021 to 2031.

At present, the complete East Asia region holds the trophy in the manufacturing of personal and other wearable cooling devices. The region enjoys budget-friendly technology, and low production costs and facilities, which have been holistic factors driving market growth.

Demand for wearable pocket AC devices remained the true opportunity for the nation to show its forte, and is set to behold the same over the next couple of decades.

While the low-cost production aspect is concerned, the region hosts a huge number of masked manufacturers positioned in and around Hong Kong. Manufacturers offer a wide variety of products serving numerous brands all across the globe. The country is also expected to foster new entrants with minimal capital investments, and will witness highly positive shipments and profits even over the short term.

Why are Neck Band / Neck Strap Products Expected to Gain High Traction Over the Coming Years?

Since the beginning of the development of personal air conditioners, design and development teams of various players have directed their focus on enhancing already existing neck fans to air conditioners by adjusting and adding necessary mechanisms and attachments.

However, there were many other aspects included, such as cost structure and design normality, which ended up making neck type wearable air conditioners hold strong prominence at the initial phase.

The neck band type segment is estimated to create an absolute dollar opportunity of 12.6 Mn at a growth rate of 18.6% CAGR over the ten year tenure. Use of wearable air conditioners with mobile applications for neck band types will possess high attractiveness over the next couple of years.

Which Sales Channels are Preferred for Purchasing Wearable Air Conditioners?

Wearable air conditioners are being purchased through various distribution channels. Options range from various online platforms to offline channels offering a wide pool of opportunities for customers to choose from.

Online sales of wearable air conditioners have remained the most opportunistic choice for customers, as these offer them with the option to check reviews by previous customers, and the segment has conquered almost 70% of market share. 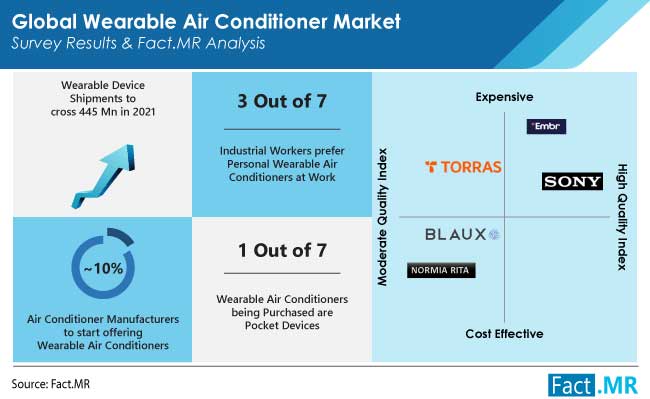 These brands offer all new technology products in personal wearable air conditioners by harnessing their R&D expenditure. Players have also launched newer versions of their pioneer products launched back in 2017 and 2018.

What was the actual demand for wearable air conditioners in 2020?

What are the sales projections for wearable air conditioners?

How did the global wearable air conditioner market perform in the last 5 years?

What are the primary reasons driving demand for wearable air conditioners?

What are the latest trends in the wearable air conditioner space?

Considerations for including wearable air conditioners under their portfolio by top air conditioner manufacturers is the most observed and ongoing trend in the market.

How much share do top 4 players hold in the market?

Which countries are key demand generators of wearable air conditioners?

What does the North American market for wearable air conditioners portray?

What is the anticipated growth rate for the Europe market during 2021-31?

What do shipment volumes for Japan and South Korea convey?

The markets in Japan and South Korea are projected to expand at 14.5% and 17.5% CAGRs, respectively, with both countries cumulatively accounting for 52% share in the East Asia market.