As per latest market analysis by Fact.MR, a market research and competitive intelligence provider, consumption of ammonium thiosulfates over the past half-decade decreased a CAGR of around -2.9%. In the meantime, consumption in 2021 stood at around 831 KT. Ammonium thiosulfate use in agriculture accounted for the highest market share, which is mainly attributed to high use of ATS as a fertilizer in corn production.

In addition, escalating demand for fertilizers with particular specifications has gained traction, especially in North America and Asia Pacific. Consumption of ATS in these regions is projected to see unprecedented growth, which can be attributed to rise in crop production along with growth of the mining industry.

ATS is among the best source for providing sulphur to corn plantations; rise in corn production is in direct proportion to ATS consumption. Attributed to this, the global liquid ammonium thiosulfate market is anticipated to surge at a CAGR of around 7.9% over the decade.

Which Properties of ATS are Projected to Drive Global Market Growth?

Ammonium thiosulfate, or ATS, contains both, nitrogen and sulphur, essential for crop growth in different amounts. ATS can be differentiated from other fertilizers on the basis of its controlled release properties. For example, in ATS, most of the sulphur is available to plants after application to the soil.

Additionally, solid ammonium thiosulfate is highly soluble and is also being used as a nitrification inhibitor. On the other hand, ATS use case as a herbicide carrier has gained traction over the past half-decade, and thus, attributed to these properties, ATS consumption in agriculture is poised to expand rapidly at a CAGR of around 8.1% over the period of 2022-2032. 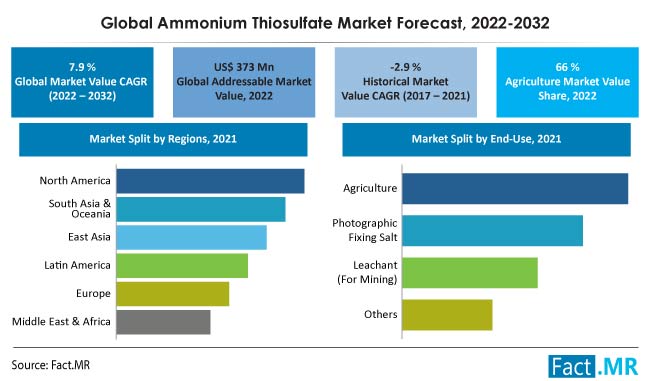 Why is the U.S. a Huge Market for Ammonium Thiosulfate?

Over the past decade, corn production and consumption has grown considerably. This is mainly attributed to corn being rich in antioxidant contents and vitamin C. Owing to this, there is high demand for corn in the U.S., which has emerged as the leading producer and consumer of corn, globally.

For instance, according to USDA, in 2021, U.S. corn producers were able to grow around 15.1 billion of bushels, which was up 7% from 2020. Since sulphur has been identified as an important source of nutrient for corn production, record production of bushels since the past half-decade has provided a positive outlook for ammonium thiosulfate manufacturers.

The U.S. ammonium thiosulfate solution market is poised to provide a high absolute dollar opportunity worth US$ 169 Mn over the period of 2022-2032.

India is an agrarian nation with around 60% of its population dependent on agriculture. Additionally, corn has been an essential cereal for decades, which is full of nutrients, and thus seeing growth in demand. Additionally, the Government of India tends to provide various subsidies on fertilizer purchase to help small- and medium-scale farmers.

Moreover, over the past decades, there has been significant rise in food demand, which can mainly be attributed to population rise in the country. This calls for more production of corn and other crops.

Hence, India is poised to provide a high incremental dollar opportunity worth US$ 46 Mn through 2032.

Which end Use Drive Major Consumption of Ammonium Thiosulfate?

Ammonium thiosulfate usage in agriculture is projected to hold a major share in the market. Properties of ATS such as high sulphur content, solubility, and controlled release make it fit to be used as a fertilizer.

Thus, in order to enhance agriculture output, consumption of fertilizers has picked up pace, showcasing a positive outlook to ammonium thiosulfate solution suppliers.

Attributed to these factors, agriculture, as an end use, remains the most lucrative segment, projected to be valued at US$ 505 Mn by 2032.

Which Ammonium Thiosulfate Grade is Most-preferred in the Market?

Additionally, since ATS finds major use case as a fertilizer, growth in crop production has provided a major boost to the sales of ATS.

How much is the current worth of the ammonium thiosulfate market?

Currently, the global ammonium thiosulfate market is valued at US$ 348 Mn.

How has the ammonium thiosulfate market performed over the past half-decade?

In terms of market value, demand for ammonium thiosulfate decreased at a CAGR of around -2.9% during 2017-2021.

Which is the highest-grossing ammonium thiosulfate market?

China and the U.S. are huge markets for ammonium thiosulfate.

How have key market players reacted to developments in this space?

Key producers of ammonium thiosulfates can be seen involved in enhancing their supply chain and logistic capabilities.

Which are some of the leading companies offering ammonium thiosulfate?

What outlook does China provides for ammonium thiosulfate manufacturers?

China holds around 35% share of the global ammonium thiosulfate market.