The increased demand for ammonium sulfate in the formulation of nitrogenous fertilizers, which are widely used in agriculture, can be attributed to market growth. The consumption of solid ammonium sulfate drives the market. Water treatment, on the other hand, is expected to drive demand for its liquid counterpart. The product is also likely to become much more prominent in the pharmaceutical and food additive industries.

According to Fact.MR- a market research & competitive intelligence provider, rising demand for higher crop yields in the agricultural sector has driven the global ammonium sulfate market demand across the 2015-2021 historical period. A CAGR of 3.8% was registered in the aforementioned period.

Ammonium sulfate is mainly produced as a byproduct of caprolactam and coke oven processes. Caprolactam is widely used for the manufacturing of nylon fibers. Nylon fibers have a wide range of applications including textiles, carpets, industrial yarn, and fishing lines and nets. The rise in demand for nylon fibers has therefore resulted in the growth in caprolactam manufacturing, subsequently leading to an increase in the supply of products globally.

Extensive Application in the Agrochemicals Sector to Drive Growth

Ammonium sulfate is a fast-acting acidic fertilizer that is best suited for alkaline soils. Increasing demand for food crops as a result of the world's growing population is likely to drive the market for agrochemicals even further. The Food and Agriculture Organization (FAO) estimates that the global supply of ammonia for fertilizer application in 2020 was 160,492 million tons. Nitrogen is a significant soil nutrient that promotes plant growth, food metabolism in plants, and chlorophyll production. Farmers' high adoption of nitrogen-containing fertilizers to increase crop yields is expected to drive up demand for ammonium sulfate.

Furthermore, the shrinking amount of cultivable land is driving the demand for fertilizers. According to the Food and Agriculture Organization (FAO), agricultural land accounted for 37 percent of total land area in 2017 but fell to 36.9 percent in 2018. Furthermore, the use of ammonium phosphate as a food and feed additive is expected to drive market growth. It is used to stimulate enzyme production and remove the high levels of potassium found in vinasse, which improves feed quality even further.

Increasing Adoption in the Industrial Sector to Boost Market Growth

Demand is expected to be driven by the increasing use of ammonium sulfate in the industrial sector for a variety of applications such as wood preservation, NMR spectroscopy, water treatment, feedstock chemical, flame retardants, and others. The product, when used as a flame retardant composition, acts similarly to d-iammonium phosphate. It raises the temperature at which materials burn and lowers weight loss rates, increasing the rate at which residue is produced.

Ammonium sulfate is thought to be toxic to humans. Due to the inhalation of aqueous aerosols and dust, exposure to the product at the manufacturing site, processing, and transportation could result in severe respiratory route infection. Skin contact for an extended period of time may result in dermatitis, permanent eye damage, and lung damage. Such factors are expected to stifle market growth.

What is the Growth Outlook for Ammonium Sulfate in the Asia Pacific?

Asia Pacific region dominated the ammonium sulphate market by holding 34.8% of the share of the global market and is anticipated to continue its dominance during the forecast period. Increasing demand for agricultural yield and food crops due to the increasing population in China, India, Bangladesh, Indonesia, Pakistan, and Japan is expected to boost the demand for fertilizers and agrochemicals, further supporting regional growth. Additionally, the presence of an ample number of manufacturers in the region is likely to foster growth rate.

Constant innovations in the field are expected to create significant growth opportunities, accounting for more than a quarter of the total market value. This region's developing economies are experiencing a rapid increase in food consumption, which is causing an increase in agricultural production and a need for more ammonium sulfate.

Is Europe likely to emerge as an Opportunistic Ammonium Sulfate Industry?

During the forecast period, the Europe Ammonium Sulfate Market is expected to grow at a CAGR of 4%. The European Ammonium Sulfate market is being researched in Germany, the United Kingdom, France, Russia, Spain, Italy, and the rest of Europe. Market participants are concentrating their efforts on increasing production capacity in order to meet demand across multiple regions.

Companies are investing heavily in increasing production volume, either on their own or through industry partnerships. Furthermore, as the demand for packaged foods grows, so does the demand for food additives containing ammonium sulfate.

BASF SE, ArcelorMittal, Domo Chemicals, Evonik Industries AG, Royal DSM, Lanxess, Honeywell International, Novus International, Sumitomo Chemical, and Helm AG are among the market's key players. According to research, the EU-27 produced approximately 300 million tons of cereals in 2020. Ammonium sulfate demand is expected to rise as a result of strong manufacturing and a fertilizer consumer base. 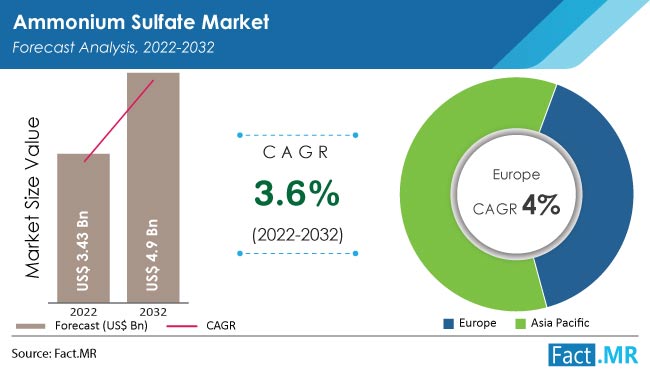 Is the Fertilizers Segment expected to Generate High Revenue?

In 2022, the fertilizers segment will accumulate the highest revenue share of over 71%. The demand is attributed to the use of ammonium sulfate as a fertilizer for alkaline soils because it contains both nitrogen and sulfur.

The growing demand for food has compelled the agricultural industry to use ammonium sulfate products in fertilizer formulations around the world. Growing fertilizer consumption in agricultural-based economies is expected to drive product demand over the forecast period.

Is Solid or Crystalline Grade anticipated to gain Preference in the Pharmaceutical Industry?

In 2022, the solid segment is expected to dominate the market with a revenue share of more than 91%. This is due to increased demand for the solid segment. Ammonium sulfate is a white odorless solid that is commonly identified as an organic sulfate salt. It dissolves easily in water but does not dissolve in acetone or alcohol.

Because of their ability to improve soil nutrient content and sulfur deficiency, solid ammonium sulfate crystals are widely used as fertilizers in alkaline soils around the world. Because the solid or crystalline grade is purer, it is expected to gain favor in the pharmaceutical industry.

The product is commercially available in liquid form as a pale yellowish solution and is recognized as a non-toxic, stable, and non-hazardous substance. Ammonium sulfate solution in liquid form is widely used in water treatment applications.

The market for liquid ammonium sulfate (LAS) is expected to grow significantly as alternatives to LAS, such as aqueous or anhydrous ammonia, have been identified as hazardous and their transport and handling necessitate strict adherence to a plethora of protocols. This sulfate is widely accepted and used as a reliable and stable source of ammonia for chloramination.

The ammonium sulfate market is highly competitive, with major international brands focusing on long-term relationships with end-users. With the expansion of water treatment operations and the expansion of the pharmaceutical sector, competition is expected to increase in the coming years. Companies that produce caprolactam, such as Domo Chemicals, BASF, SABIC, and Honeywell International, have a high degree of integration across the value chain. These companies have established themselves as key manufacturers, and they concentrate on product research and development for new applications. Among the key players in the global ammonium sulfate market new developments are:

The global ammonium sulfate market is segmented on the basis of form, application and region.

As of 2021, Fact.MR estimated the ammonium sulfate market have reached US$ 3.31 Billion.

By 2022, Fact.MR expects demand for Ammonium Sulfate to reach US$ 3.43 Billion

By 2032, the market for ammonium sulfate is likely to be valued at USD 4.9 Billion.

As per Fact.MR, the market for ammonium sulfate will accrue nearly 35% revenue across the Asia Pacific