Producers, consumers, and government policymakers are becoming increasingly interested in the technological and market fundamentals of quaternary ammonium salts as a vital replacement for feedstock being used in hand sanitiser and disinfectant manufacturing.

Quaternary ammonium salts find usage across diverse end-use industries owing to their characteristic properties of acting as a flocculent, disinfectant, surfactant, and anti-static agent. Out of the product types considered in the scope of the study, BAC10, BAC12, and BAC14 have remained the primary demand generators during the past half-decade.

As per the recent study conducted by Fact.MR, the quaternary ammonium salts market expanded at 3.9% CAGR during 2017-2021, and imports in certain countries touched 12% Y-o-Y during the last two years, especially due to the COVID-19 pandemic.

The pandemic had minimal impact as countries indulged in R&D activities into consuming QAS as a feedstock for sanitiser and disinfectant manufacturing as an alternative to ethyl benzyl chloride, which had high supply scarcity.

According to the latest projections by Fact.MR, a market research and competitive intelligence provider, sanitiser consumption hiked tremendously as a result of the COVID-19 pandemic, and this trickled down to quaternary ammonium salt demand growth arising from manufacturers of hand sanitisers and disinfectants, especially in developed countries that had access to QAS during the early stages of the pandemic.

Additionally, as quaternary ammonium salts continue to remain the most demanded commodity, especially from personal care and cosmetic manufacturers, QAS usage is poised to deliver fruitful revenue-generating opportunities for manufacturers to target in the mid-term forecast period.

Overall, the market for quaternary ammonium salts is projected to expand at 5.4% CAGR through 2032. 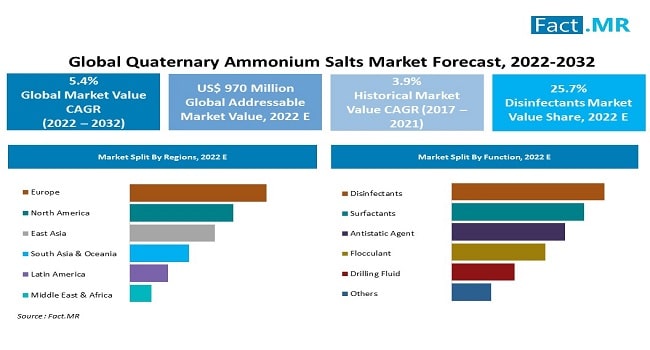 What are the Primary Demand Generators for Quaternary Ammonium Salts?

“High Usage of QAS in Disinfectants”

Industrial, commercial, and consumer chemicals used for disinfection are most commonly quaternary ammonium (quats)-based. However, because of COVID-19's increasing need for disinfectants, some quats were in limited supply since the raw ingredient required to make it - ethyl benzyl chloride or EBC - is only produced in a handful of countries and the current production capacity had already maxed out.

Countries started to invest in R&D into alternate feedstock search, especially for those applications that can employ alternatives to EBC-based quats products, and QAS turned out to be the saviour.

Other than sanitiser and disinfectant manufacturing, quaternary ammonium salts have found application in personal care and cosmetic products, where QAS usage as an anti-static agent in shampoos and conditioners has gained immense prominence, especially during the past half-decade.

Additionally, quaternary ammonium salts find usage in the textile industry as well, where it is used as an anti-bacterial dye.

Other than its use in personal care & cosmetics, disinfectants, and sanitisers, it is also used across diverse end-use verticals as a vital component in adhesives, floor wax and polish, paper and paperboard manufacturing, paints & coatings, cutting fluid, laundry starch, cement mixtures and printing pastes.

Owing to the aforementioned aspects, demand for quaternary ammonium salts is poised to heighten at a rapid rate in the mid-term forecast period.

What Made the U.S. an Early Adopter of Quaternary Ammonium Salts?

The U.S. continues to remain a vital consumer of quaternary ammonium salts, since it adopted the usage of QAS as a feedstock for sanitiser and disinfectant manufacturing very early into the pandemic situation, as companies involved in the process had previously started looking for an alternative to ethyl benzyl chloride, which was then mostly manufactured outside the U.S., and it had to rely heavily on imports for meeting its domestic needs.

Besides, the U.S. has remained the world’s largest beauty and personal care goods consumer with the market anticipated to touch US$ 88 billion by 2022-end. This is poised to trickle down into high demand for shampoos and conditioners being used regularly by U.S. consumers whose per capita contribution is around US$ 240-360 annually to the growing cosmetic industry in the country.

Besides, the U.S. is home to one of the largest ageing populations among developed countries, and the geriatric population is fond of procuring an increasing number of concealers, eye & facial makeup, and foundations, to name a few. This leads to high demand from cosmetic manufacturers who use quaternary ammonium salt in cosmetics manufacturing.

This was visible in trade data as well where the U.S. accounted for nearly US$ 219 million of quaternary ammonium salt and hydroxide imports, exclusively for consumption, during 2020-2021, and remained the largest importer.

Out of the functions considered in the scope of the study, quaternary ammonium salt usage as a disinfectant and surfactant, cumulatively, is set to account for a majority of the demand, standing at nearly 25.7% and 22.3%, respectively.

Apart from sanitiser and disinfectant manufacturing, QAS usage as an anti-static agent in the personal care & cosmetics industry is poised to continue capturing a vital chunk of the market revenue, increasing at 5.3% CAGR during the forecast period.

Besides, quaternary ammonium salts also find usage as a fabric softener, which has remained one of the vital sources of revenue generation in the past half-decade.

What are the Key End Uses of Quaternary Ammonium Salts?

The personal care & cosmetics industry has ideally remained one of the vital demand generators of quaternary ammonium salts, accounting for nearly 27.5% market share in 2022. Among the products considered, shampoos & moisturising lotions together accounted for a high share in the market until 2021.

Although personal care & cosmetics accounted for a huge chunk of the market during the past half-decade, disinfectant and sanitiser end uses have led the show in the past two years, especially during the pandemic, where manufacturers started looking towards quaternary ammonium salts as a feedstock for the manufacturing of essential commodities such as sanitisers, disinfectant, and surface cleaners.

As such, both the end uses - disinfectants & sanitisers and surface cleaners - cumulatively accounted for over 50% of the market share in 2021, and are further expected to generate fruitful revenue-generating opportunities for QAS manufacturers over the coming years.

Fact.MR has provided thorough information on the overall tactics used by quaternary ammonium salt suppliers. Along with an extensive overview of BAC10, BAC12, and BAC 14, among other product types, their production capacities and category-wise end uses have been covered exclusively in the research report.

The newly published report contains SWOT analysis and revenue earned by the top manufacturers of quaternary ammonium salts positioned across regions, along with their capacity utilization rates and targeted consumer info.

The global quaternary ammonium salts market is pegged at US$ 970 million in 2022.

Quaternary ammonium salt consumption is anticipated to increase at a CAGR of 5.4% through 2032.

Key players are conducting their market feasibility analysis and are investing in using QAS as an alternative to ethyl benzyl chloride for sanitiser and disinfectant manufacturing.

The U.S. is estimated to hold 21.8% of the global quaternary ammonium salts market share by 2032.

*139 figures and 70 tables includes by FactMR