The global polyphenylene sulfide (PPS) resins market to progress at a CAGR of 6.7% and be valued at US$ 2.2 Bn by 2031. Currently, PPS resins account for close to 1% of the global engineering thermoplastics market.

Polyphenylene sulfide resin production in 2021 is estimated to surpass 120 KT, with approximately 50% being consumed in the APEJ region, states Fact.MR, a market research and competitive intelligence provider. Overall polyphenylene sulfide (PPS) resin consumption is set to reach 199 KT by the end of 2031.

Amongst the prominent applications of polyphenylene sulfide resins (automotive, industrial, electrical & electronics, aerospace & defence, coatings, filters & filter bags and others), its use as a lightweight and heat-resistant (PPS) resin in the automotive sector generates approximately 45% of overall market revenue.

Moreover, polyphenylene sulfide resin application in the industrial and aerospace & defence sectors is set to gain nearly 228 BPS and 62 BPS by end of 2031, respectively.

Additionally, projections are that the advanced properties of PPS resins, such as high flame retarding properties, have made them a valuable coating material for the electronics industry.

Moreover, use of PPS resin as a thermoplastic polymer in a wide range of applications, ranging from coating, filters, and films, among others, is expected to cover significant volume of global consumption, standing at around 13 KT at present.

The COVID-19 pandemic had an impact on revenue generation capability of companies as production facilities were shut down and the demand-supply chain was directly affected in a negative manner. As such, a dip in PPS resin production was experienced in the market.

Furthermore, with advancements in technology, newer grades can now be blow moulded or extruded. A hike in global demand and newer grades of PPS resins collectively underpin the hub of immense futuristic opportunities for market players. 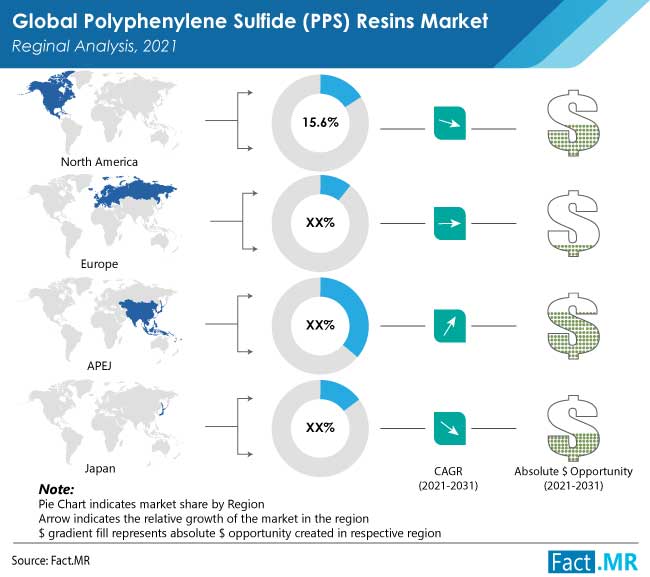 Why is China Expected to Proliferate in the PPS Resins Space?

The (Asia and Pacific except Japan) APEJ polyphenylene sulfide resins business accounts for significant market share as compared to other prominent regions. China holds high possibilities for future growth opportunities in the region. As such, it will remain the main target for manufacturers, specifically in the domain of the automotive industry.

This regional market accounts for just over 50% of global revenue share and is anticipated to expand at an impressive CAGR of over 8%, due to strong growth in industrial production and favourable government stance for use of PPS filter bags in coal thermal plants.

Moreover, demand for PPS resins in North America and Japan has reached maturity, and producers from these regions are expected to market their products aggressively in faster-growing markets such as China. Thus, manufacturers from China should expect more intensified foreign competition. On the other hand, PPS demand in MEA and Latin America is mainly met through imports.

Attributed to the above-discussed factors, it is projected that consumption of polyphenylene sulfide resins in China will be around 88 KT in terms of volume, increasing at a CAGR of around 8.4% over the decade.

What is the Scenario for Polyphenylene Sulfide Resin Sales in Japan?

Polyphenylene sulfide resin sales in Japan are projected to be mainly driven by increased demand for PPS resins in automotive and electronic applications. Moreover, Japan has an ambitious plan to make electric applications such as connectors, switches, circuit breakers, sockets, relays, packaging (transistors, capacitors, multichip modules, potting cups, and power converters) and encapsulation as the epicentre for the demand for PPS resins.

Thus, rise of the electrical and electronics industry in Japan is poised to provide lucrative opportunities for polyphenylene sulfide resin manufacturers. Attributed, to these factors, Japan is projected to provide an absolute $ opportunity worth US$ 124 Mn over the forecast period.

Japan sustained itself to be a dominant manufacturer of PPS resins by accounting for around 20% revenue share in 2020. PPS demand in Japan is anticipated to increase at a CAGR of 4.3% over the assessment period. The country is the largest exporter of PPS in the world, and also the second-largest consumer of PPS, after China.

Which Type of Polyphenylene Sulfide Resin is Projected to Witness High Demand?

Polyphenylene sulfide is a highly demanding raw material for industrial filtration and filter bags. After extensive chemistry-emphasized research accomplished on PPS resins, sulphide-based substrate was designed, which is useful in high-temperature applications where alkaline and chemical resistance is required.

Owing to high focus on the above aspects, PPS compounds have been a prominent support material in industrial filtration. Demand for PPS filters in the industrial and manufacturing market will observe a significantly growing trend.

Attributed to the above-discussed factors, PPS resins are projected to provide a notable absolute $ opportunity in filtration & filter bags, while growing at a CAGR of around 6% over the decade.

As with this rapidly increasing trend of demand for electric and hybrid automobiles, the most effective results will occur for manufacturers looking to target the EV market, especially in China.

PPS resins are highly needed for electric auto parts that require high-temperature stability, such as motor coils, insulating films, wires, and other electrical parts. In addition, high thermal resistance ability helps withstand temperatures up to 2,000°C, and this leverages demand in electric and hybrid automobile production.

How Has COVID-19 Impacted Revenue Generation from PPS Resins?

The COVID-19 pandemic left no industry affected and impacted sales of polyphenylene sulfide resins as well. Y-O-Y revenue growth saw a dip of 0.8% in 2020 when compared to 2019.

Contraction can be attributed to decrease in PPS demand from industrial sectors along with a dip in the sales of automotive components. 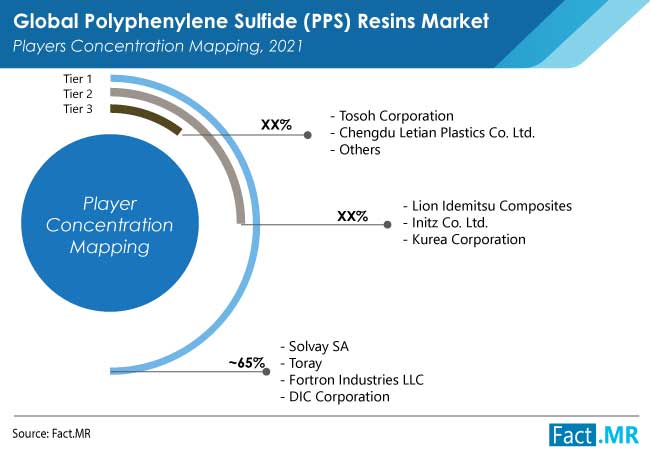 Market players in the PPS resins business have mainly opted for organic growth strategies such as capacity expansion, product development, and innovation. These strategies are helping PPS resin key players expand their regional footprint and garner market share, thus providing them with a competitive advantage.

Similar, recent developments related to companies offering in polyphenylene sulfide (PPS) resin business have been tracked by the team at Fact.MR, which are available in the full report.

What is the current worth of the polyphenylene sulfide resin market?

At what CAGR is the market poised to expand over the next ten years?

Polyphenylene sulphide resin revenue is expected to increase at a CAGR of around 6.7% over the period of 2021-2031.

PPS resin sales increased at a CAGR of around 4.2% over the past half-decade.

What are the key trends identified propelling PPS resin demand?

Increased use of PPS resins in automobile application is a key trend being observed in the market.

What is the share of the top 5 PPS resin suppliers?

Which are the main countries driving demand for PPS resins?

China, Japan, the U.S. and Germany are the main countries driving demand for polyphenylene sulfide resins.

What outlook does the APEJ market for PPS resins provide?

Which countries are major producers of polyphenylene sulfide resins?

China, Japan, and the U.S. are major PPS resin producers.

At what rate is polyphenylene sulfide resin sales projected to increase in Japan?

PPS resin sales in Japan are projected to increase at a CAGR of around 3.8% over the next ten years.