Demand for polyphenylene oxide resins to be used in the automotive & transportation industry is projected to increase at a higher CAGR of 4.9%, attributed to high deployment for the manufacturing of automotive components.

According to Fact.MR, market research and competitive intelligence provider, the global polyphenylene oxide resins market expanded at a CAGR of 3.5% from 2017 to 2021.

Polyphenylene oxide resins are a robust and rigid material with excellent melting points, glass transition temperatures, and superior thermal resistance. Acid and base resistance is extreme in this substance. Polyphenylene oxide resins provide good load-bearing qualities, high stiffness, and dielectric properties, as well as being non-dripping and self-extinguishing.

Polyphenylene oxide resins have garnered considerable attention because of the growing demand for high-end engineering thermoplastics across industrial verticals. Because of their unique qualities, such as excellent mechanical performance, low moisture absorption, great dimension stability, and electrical insulation, polyphenylene oxide resins are used in a wide range of applications.

Physical and chemical improvements have been made to overcome the numerous limitations of polyphenylene oxide resins, particularly their poor handling and resistance to organic solvents. As a result, PPO nanocomposites have improved performance in a variety of applications. Modified PPO resins enable various molding methods, including extrusion, injection molding, and blow molding. 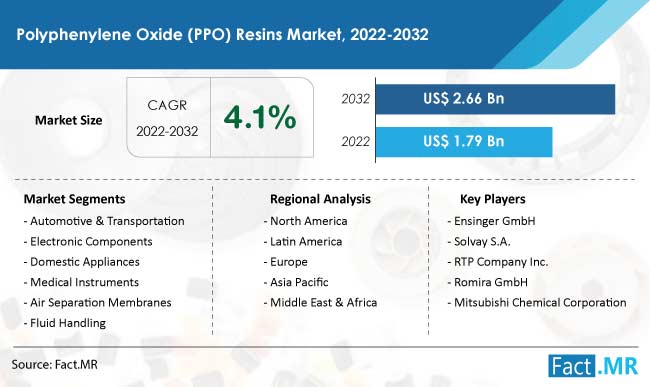 Why is Global Consumption of Polyphenylene Oxide Resins Increasing Rapidly?

PPO, or polyphenylene oxide, is a type of synthetic polymer. The need for tailored polymers is increasing as people become more aware of innovative materials that increase end-product characteristics while also maintaining quality. Polyphenylene oxide resin manufacturers have begun to collaborate with compounders on the development of new, cutting-edge technologies and applications.

PPO is conventionally made via oxidative polymerization of 2, 6-dimethylphenol or by combining parachlorobenzene to a hydrogen sulphide solution with oxygen and a catalyst. Due to a large drop in oil prices, profit margins in the polymers business have been strong in recent years.

New technological breakthroughs, such as the digitization of consumer entertainment and communication, are propelling the electrical components industry forward. Rising R&D and innovation are paving the path for high-technology electrical products, which is expected to boost the demand for PPO over the coming years.

What Obstacles are Hindering the PPO Resins Market from Reaching its Full Potential?

The price of raw materials has risen and fallen drastically recently. As a result, the market for polyphenylene oxide resins is deteriorating. The profitability margins of resin makers are affected by crude oil price variations, which can rise or decrease.

Because crude oil derivatives are so variable, they place a strain on polyphenylene oxide resin producers' profits and generate a supply-demand gap. The cost of production and distribution has been affected by rising raw material prices, resulting in higher final product costs.

Which Regions are Crucial to Global PPO Resins Market Growth?

Asia Pacific is anticipated to be a highly sought-after market for all PPO resin suppliers across the world. At present, consumption of polyphenylene oxide resins in this region accounts for a value of US$ 462.2 million and is estimated to expand at a CAGR of 4.6% across the forecast period.

High use of PPOs in several end-use industries is expected to primarily drive market growth in this region. This region has witnessed an increase in demand for electronic components owing to rising consumer spending potential which is fueling sales of several devices. Hence, the usage of PPO resins in electronics and electrical appliance manufacturing is also expected to increase over the coming years.

Supportive government initiatives to boost manufacturing and industrial activity in this region are also anticipated to favor polyphenylene oxide resin sales through 2032. Especially increasing automotive manufacturing in this region is predicted to provide new opportunities over the years to come.

China and India are anticipated to be the most lucrative markets in the APAC region over the forecast period. Rising demand for consumer electronics in the aforementioned countries is also expected to increase the consumption of PPO resins.

The presence of key automotive manufacturers in this region is expected to drive demand for PPO resins in the automotive sector for countries such as Germany and France. Europe polyphenylene oxide resins market is anticipated to attain a valuation of US$ 796.7 million by 2032 and currently accounts for a market share of 29.6% in the global industry landscape.

Rising penetration of machining polyphenylene oxide in the plastic industry, rising disposable income, and expanding consumer products industry are driving the market growth in the U.S.

Why is China Exhibiting High Demand for PPO Resins?

“Growing Usage of PPO Resins in Electronics and Electrical Appliances”

The market in China is anticipated to rise at a CAGR of 5.1% over the forecast period. China is a large market for electronics and electrical appliances, and it is where low-cost automotive and electrical parts are manufactured.

Consumer products constructed of PPO composites are becoming more popular, as is the demand for these resins in medical and air separation membranes. Growing investments in research and development initiatives for epoxy-modified polyphenylene oxide resins are also driving market expansion in China.

The automotive manufacturing sector is flourishing in various countries across the world and the increasing use of electronic components in vehicles is expected to further bolster demand for polyphenylene oxide resins throughout the forecast period. China, Germany, and India are expected to be the most lucrative automotive markets in the world.

The automotive and transportation segment is projected to account for a market share of 26.8% by 2032 and stands at a valuation of US$ 442.3 million in 2022.

Rising research and development activity in the electronics industry is leading to the launch of innovative technologies and subsequently driving demand for modified PPO resins.

Demand for polyphenylene oxide resins in the electronic components application segment is anticipated to evolve at a CAGR of 4.5% throughout the forecast period and is estimated to end up with a value of US$ 632.3 million by 2032-end.

Polyphenylene oxide resin suppliers are focusing on increasing their manufacturing capacity to meet high demand from the automotive and electronics industries.

The PPO resins market is competitive with major players accounting for a substantial market share. New entrants could penetrate the market by deploying unique strategies and launching novel products that suit evolving trends.

Currently, the global PPO resins market accounts for a revenue of US$ 1.79 billion.

The global polyphenylene oxide resins market is estimated to reach US$ 2.66 billion by the end of 2032.

Automotive and transportation application of PP resins lead the market with an expected valuation of US$ 713.9 million by 2032.

PPO resin sales in China are expected to increase at a CAGR of 5.1% through 2032.

*38 figures and 116 tables includes by FactMR