According to Fact.MR- market research and competitive intelligence provider- sales of car DVR flourished at a CAGR of 7.5% from 2017 to 2021. With the emergence of a slew of applications in futuristic on-road vehicles and a pool of untapped safety and security concerns associated with the implementation of car DVRs, the market has witnessed a wide range of opportunities in terms security and vulnerability over the past few years.

Prospects contracted significantly during the worst of the COVID-19 pandemic, attributed to a massive slowdown triggered by the imposition of mandatory nationwide lockdowns in the first half of 2020. Eventually, as the infection rates began to slow, and people began to get vaccinated, prospects rebounded as industrial activity was permitted to resume.

Car dashboard cameras are used in vehicles because of their ability to record high-quality footage of road activities. This footage can be used as evidence in federal courts in cases of accidents for insurance claims. These cameras require a memory card in order to store the clips. This technology is gaining popularity among vehicle owners due to the added legal protection it provides in the event of an accident or road fatality. As per the report, the market is expected to surge 1.6x from 2022 to 2032.

Law enforcement agencies all over the world primarily use car DVRs. However, increased use among personal vehicle owners as well as commercial fleets in recent years as a result of an increase in vandalism, theft, and vehicle collisions will bode well for market growth. This technology enables drivers to effectively control their on-road security by documenting such incidents.

Dash-mounted video cameras, for example, are extremely popular in Russia due to lax and often corrupt law enforcement, as well as a legal system that rarely favors first-hand accounts of traffic collisions, which has made in-vehicle cameras a necessity for many drivers. Over the forecast period, these factors are likely to drive market growth.

What are the Favorable Policies Driving the China Market?

With the advancement of computing power and the expansion of front view system functions, as well as the relative cost advantage, it is estimated that more than 16.1 million passenger cars in China will be equipped with front view systems by 2025, with a 64 percent installation rate.

Currently, the front view monocular solution is the most common solution for Chinese passenger cars, but some companies are also investigating the use of front view cameras such as binocular cameras. Huawei and DJI will launch self-developed binocular cameras and solutions in 2021.

Binocular cameras from Huawei have been used on the ARCFOX Alpha S. In addition, DJI intends to incorporate the binocular camera autonomous driving solution into Chinese models in 2021. Fact.MR expects the market in China to surge at a 7% CAGR until 2032.

What Supports Increasing car DVR Sales in the Germany?

Overcoming privacy infringement laws is the most significant barrier to greater car DVR adoption in Europe. Countries such as Germany, for example, represent a significant growth potential for the car DVR market because the only law governing such cameras in Germany is that they must not hinder driving or obstruct the driver's field of vision.

Furthermore, Germany recently passed legislation that allows DVR footage to be used as evidence in the highest court. As a result, Germany is expected to grow significantly in the market. A CAGR of 8% is forecast for the market for car DVR in Germany. 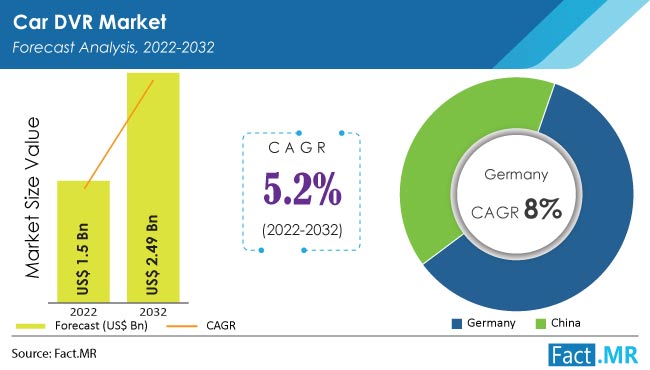 The market is divided into two categories: passenger cars and commercial vehicles. Over the forecast period, the passenger car segment is expected to accumulate 63% of total market revenue in 2022 and beyond.

Road safety regulations and standard laws in place in several countries, combined with increased consumer awareness of the benefits of car DVRs, have resulted in increased product demand in the passenger car segment. Furthermore, the integration of in-vehicle recorders with various driver assistance functions is likely to increase car DVR adoption among personal vehicle owners.

Prominent car DVR manufacturers are emphasizing on introducing highly advanced product lines, complete with high definition imaging and videography capabilities to provide crystal clear vision. Moreover, approaches such as acquisitions and partnerships are also relied upon. Some significant developments are as follows:

According to Fact.MR, car DVR sales in China are likely to flourish at a CAGR of 7% through 2032

Passenger cars are likely to be the dominant end users of car DVRs, accumulating 63% revenue

*78 figures and 272 tables includes by FactMR