The global car radiator market held around ~56% share in the overall market valuation for automotive radiator market in 2021 which is projected to grow with a CAGR of 4.8% during 2022-2032.

In past, the car radiator market value saw a significant market growth of 3.7% CAGR from 2017 to 2021. The global car radiator market has generated an absolute $ opportunity of nearly USD 754 Million in the last five years. It is assessed to create an absolute $ opportunity of almost USD 1.7 Billion and USD 2.5 Billion throughout 2022 & 2027 and 2027 & 2032 correspondingly.

Further, South Asia & Oceania car radiator market has witnessed notable growth in the previous five years. It holds nearly one-sixth market shares which is projected to increase at a CAGR of 7.1% during the assessment period. Moreover, South Asia & Oceania is measured to gain around 199 BPS and generate an absolute $ opportunity of USD 457 million during 2022 and 2032.

From the segmental view, on the basis of cars type, compact car type is the leading segment which is holding nearly one-third market shares of car type segment. It is likely to grow at a CAGR of 5.7% and offer an absolute dollar opportunity of nearly USD 1194 Million by the end of the assessment period.

How Increasing Aftermarket Opportunities for Market Players Led to Comprehend a Prominent Share of market?

Radiators are automobile components that, depending on their function, must be replaced after a certain significant period of time. Unlike several other stationary automotive components, radiators offer a wide range of aftermarket choices.

Because of the replacement cycle, aftermarket prospects will continue to be critical for industry participants. Moreover, rising global vehicle production is expected to bring up more opportunities in the car radiator aftermarket in the near future.

How Growing Demand of Automobile Triggering the Demand?

Global automotive sales have been strong in recent years, with the United States and China setting the pace in terms of both sales and manufacturing. As the United States' economy gradually improves, the country's automotive sector accelerates, particularly in the auto components vertical.

China, on the other hand, is entering a maturation era in which it will be more sensitive to macroeconomic effects. Brazil, Mexico, and India are among the emerging markets being studied.

Furthermore, the expansion of these countries' economies has attracted a number of globally recognized car manufacturers. In these countries, the demand for vehicles, both passenger and commercial, has skyrocketed.

How Increasing Adoption of Electric/ Hybrid Vehicles Expected to Strengthen the Global Sales of Radiators in Car Radiator Industry?

The global automotive industry is shifting towards the development of more fuel efficient as well as emission free vehicles. As a result, the global market has witnessed a high surge in the production of electric vehicles and hybrid vehicles and this trend is expected to strengthen in the coming years.

Further, similar to the conventional internal combustion engine, the hybrid or electric vehicles also need external cooling to avoid overheating of motors, batteries and other components. The effective cooling of the components in hybrid cars often require multilayer radiator systems with advanced coolant and sometime multiple radiators for cooling the internal combustion engine and battery and motors separately.

The increasing adoption of radiators pertaining to increase in automobile manufacturing is expected to drive the global car radiator market.

The technological advancements in manufacturing technology and material science have made radiators more reliable and their service life has increased. Generally, the radiator assembly is composed of a heat exchanger, tanks, and a cooling fan which act as functioning components. Amongst these, the cooling fan is subjected to frequent failures and hence it remains the only component in the whole assembly that requires to be replaced.

What is the North America Car Radiator Market Scenario?

Due to the enactment of Corporate Average Fuel Economy (CAFÉ) standards in the United States, the emphasis is on reducing the fuel consumption of cars by increasing their fuel economy.

However, the automobile industry in North America is witnessing traction with the increasing growth of the demand for vehicles in the region. Rising market competition along with consumer complexity is boosting the sale of car radiators in the North American market.

Further, the United States is the leading shareholder with almost 90% market share due to the big production capacity and distribution network. These producers are possessing cutting-edge technologies owing to which they have competitive advantage in the industry.

Due to the rapidly growing automotive industry in the region, especially in developing countries such as India and China, and the presence of major key players in the Asia Pacific car radiator market, this region is estimated to be a comparatively lucrative region in terms of market share and CAGR growth in the overall global car radiator market during the period of assessment. 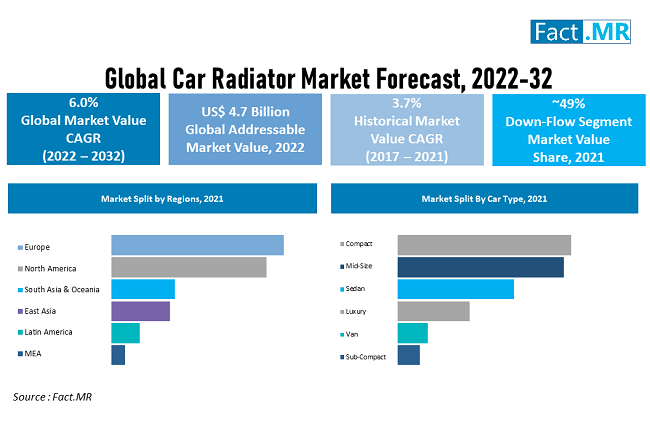 In the case of conventional copper and non-coated metal radiators, they can corrode easily, resulting in the reduction of cooling efficiency and increased failure rate due to the reduced rate of flow. Hence, such kind of old radiators need to be replaced by new radiators.

However, aluminum material based radiators are largely adopted by manufactures to avoid performance issues. In terms of value, aluminum accounts for nearly 70% market shares in 2022. Also, the segment is projected to grow at a CAGR of 4.5% and add nearly 173 BPS by the end of 2032.

Which Sales Channel is projected to Observe Tremendous Growth in Car Radiator Market?

The OEM sales channel is largely adopted by the numerous industries owing to which it’s projected to grow at a CAGR of 6.2% throughout the forecast period. This is expected to create an absolute dollar opportunity of almost USD 3378 Million to the car radiator market over the assessment period.

Companies working in the car radiator industry are expanding their product portfolio by launching new products as demand for car radiators is increasing due to rising demand for hybrid vehicles.

The global value of car radiator market is estimated to be worth over USD 4.7 Billion in 2022.

The demand is anticipated to surpass USD 8.5 Billion by 2032 end.

Compact under the car type segment contributes ~30% of market share in global sales of car radiator.

*132 figures and 78 tables includes by FactMR