Smokeless tobacco products are soaring in popularity as convenient alternatives to cigarettes. Stringent government rules and regulations with regard to smoking and environmental contamination has given an upswing to demand for smokeless products such as snus among end users.

This trend has been further given impetus by the imposition of taxes on cigarettes globally. Snus market is expected to garner significant traction and is set to generate an absolute $ opportunity of more than US$ 1 Bn during the forecast period.

North America snus market is still in its nascent stages of development. Conducive market environment has been created for domestic as well as foreign manufacturers introducing smoking alternatives like snus and chewing tobacco. As a result, investments in United States have intensified and are expected to increase during forecast period.

Efforts of United States Government to reduce smoking by granting permission for usage of tobacco and nicotine alternatives is expected to further increase adoption of snus. Owing to these changes in United States and an increase in efforts of snus manufacturers, North America is projected to grow double its current value during forecast period.

Flavored snus accounts for a majority share in the snus market and has been rapidly adopted. New snus consumers have been at the forefront of this surge. Flavored snus has also been preferred by new users owing to value priced products. 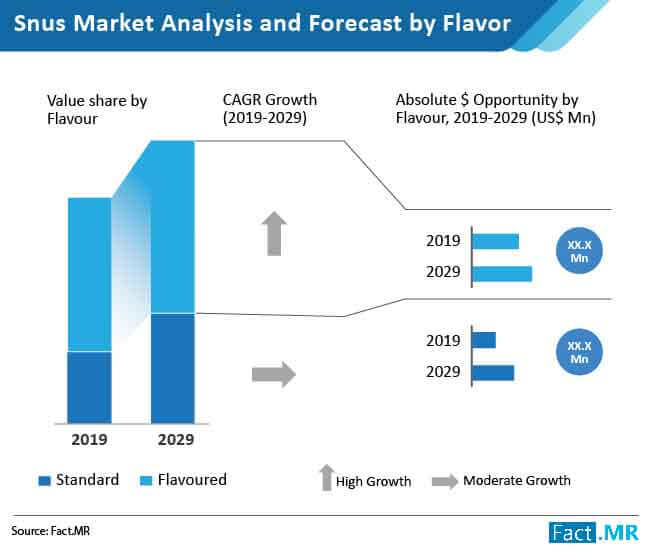 Snus market is consolidated with 4 companies holding more than 70% share in the global market. Competition in snus market is high with companies trying to gain an edge over others through rapid developments. Companies like Swedish Match AB have maintained their hold in the market with acquisitions to optimize their portfolio and increase investments in United States. Other companies like Altria Group, Inc. have also entered the snus market through acquisitions. Investments of snus manufacturers are expected to intensify in North America. 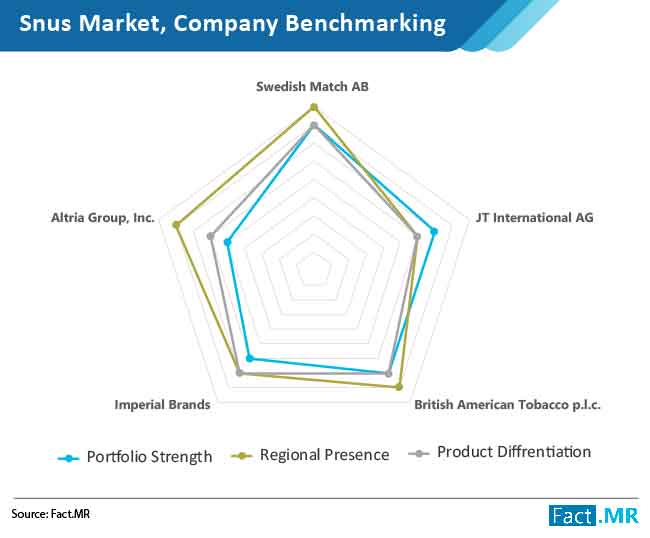 Segmentation table of the global snus market has been provided below on the basis of product type, flavor, packaging, sales channel, and region.

This taxonomy and the detailed table of content prepared are confidential and intended exclusively for the individual or entity with whom it is being shared. Reading, disseminating, distributing, or copying this to any party other than addressee(s) is unauthorized and prohibited.

*157 figures and 96 tables includes by FactMR