According to Fact.MR’s recent study on the global motion control market, the market is gaining traction steadily and is expected to ascend at around 5% CAGR through 2031, registering an impressive valuation of US$ 30.5 Bn, surpassing US$ 25 Bn by 2026. Metal cutting applications are poised to remain dominant, surpassing US$ 2 Bn in valuation by 2031.

As per Fact.MR – market research and competitive intelligence provider, during the historic period of 2016 to 2020, the market expanded at a CAGR of 4% and registered nearly US$ 18.6 Bn at the end of 2020.

Manufacturers are increasingly adopting motion control systems in various industries in order to automate the production process in a cost-effective and faster manner. Adoption of the PC-based controllers and microcontrollers continues to witness significant adoption among motion control market players.

Motion control is at the receiving end of numerous innovations with regard to technological advancements. A recent trend witnessed in various industries is the increasing adoption of collaborative robotics equipped with smart actuators. The growing need for conveyor application has led to a surge in demand for advanced motion technology and independently controlled movers.

Leading market players are collaborating to become highly efficient and are developing motion control systems to gain a major market share. For instance, in May 2021, DuPont and Regina collaborated and announced the launch of its breakthrough motion control technology. Regina chose new DuPont Delrin® Renewable Attributed resin for its chains and modular belts for bottling, packaging, and glass manufacturing conveyor applications.

How Will the Demand for Gaming Equipment Boost Sales?

In June 2021, after 10 years of its launch, the Nintendo Wii brought along some fixes and launched a new version of Legend of Zelda.  The game is now fully Motion-controlled, offers a better gaming experience and players can interact with the system through body movements.

As the manufacturing process of electronics and automotive products require accuracy and precision while controlling various parts of the manufacturing machines, manufacturers are increasingly adopting leading technology that offer distributed intelligence.

In May 2021, Delta Electronics launched the AX-308E compact and mid-range PLC motion controllers. The system is based on CODESYS- a development environment compliant with international standards targeting intelligent industrial automation applications. Thus, it shortens learning and programming time.

How is Industry 4.0 Revolution Propelling Motion Control Adoption across Europe?

According to Fact.MR’s projections, Europe is projected to be a significant revenue contributor to the global market for motion control through 2031, holding more than 25% market share. The key driver for motion control systems is the expansion of warehousing.

Owing to the presence of many automotive manufacturers in countries such as Germany, Europe has been a prominent adopter of industrial automation, owing to increasing investments in Industry 4.0. Europe accounts for more than one-third of the global industry 4.0 automation, according to the CBI Ministry of Foreign Affairs.

Germany is the epicenter of the Industry 4.0 revolution. German manufacturers are increasingly investing and working towards the integration of smart technologies to make their manufacturing facilities fully automated.

How do Motion Control Growth Prospects Appear across North America?

With the focus on modernizing America’s airport infrastructure, the demand for conveyor systems along with motion controllers is projected to bolster across the country. In April 2021, the U.S. Government announced its plans to invest US$ 25 billion into Airport Infrastructure, by virtue of the new American Jobs Plan unveiled by President Joe Biden.

Moreover, the gaming industry in the region is continuously evolving in line with the latest technologies such as augmented reality and virtual reality, to capture the attention and imagination of gamers across the globe. This is augmenting the growth of the market for motion control. As per Fact.MR, the North American market is poised to accelerate at a CAGR of 5% through 2031. 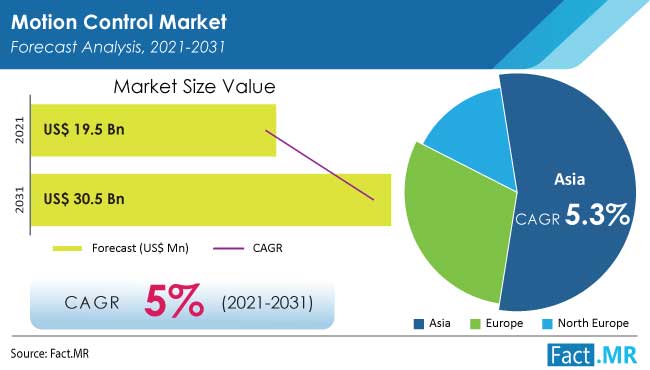 On the basis of component type, the AC servo segment is expected to represent significant revenue growth owing to various factors like low noise, constant speed, high efficiency, and speed. The segment is projected to account for a value of over US$ 2.4 Bn by 2026, opening various opportunities for the key players.

In April 2020, Mitsubishi Electric Automation, Inc. announced the release of its next-generation MELSERVO-J5 Series of AC servo motors, amplifiers, and motion control units. The MELSERVO-J5 Series brings performance, reliability, flexibility, and efficiency to a wide range of industries. By 2031, the segment is likely to surge at over 4% CAGR.

According to Fact.MR’s analysis, the metal cutting segment is expected to represent the highest revenue growth, accounting for a value of over US$ 2 Bn by 2031. Metal cutting is an important process for several end use industries, including automotive and industrial goods manufacturing.

As requirements for precision-based cutting technology increase, factories are incorporating highly automated cutting machines imbued with such advancements as nanotechnology. As a result, demand for high-grade motion control machines is steadily inclining.

How much is the motion control market worth?

What is the projected market value of the motion control industry for 2031?

The global market for motion control is envisaged to account for US$ 30.5 Bn by 2031

What was the last 5 years CAGR for the market?

What is currently driving demand for motion control?

Manufacturers are increasingly adopting motion control systems in various industries in order to automate the production process in a cost-effective and faster manner.

Which are the top companies manufacturing motion control devices?

What is the growth outlook for the North American market?

According to Fact.MR, the motion control industry in North America is poised to surge at a CAGR of 5%

How opportunistic is the market in Asia expected to be?

Fact.MR anticipates motion control demand across Asia to grow at a CAGR of 5.3% until 2031

What is the expected valuation of the market for motion control in Europe?

Which is the most preferred motion control component type?

Which is expected to be the primary application area for motion control?

Metal cutting applications will be dominant, generating over US$ 2 Bn by 2031