Intelligent power distribution module growing with the highest CAGR and account for more than 1/4th revenue by the end of 2022.

The global power distribution module market is expected to witness exponential growth in successive years, this is mainly due to the increasing demand in the construction, automobile, and marine industries. Power distribution modules (PDM) in automotive vehicles help distribute electric power which is transferred from the main source to a variety of different vehicle parts operating on electricity.

The market for connected vehicles with electric power sources is witnessing growth in the recent past especially due to the various issues caused by fuel-powered vehicles. This shift of preference towards electric vehicles will lead to several market opportunities for the PDM market in the automotive segment.

The major manufacturers are drawing their attention towards research & development to provide a number of new products that would be more efficient. An increase in automation practices is also providing several opportunities to PDM manufacturers worldwide.

The adoption of new technology in the automobile segments such as connected and self-driving cars are expected to possess great opportunities for the PDM market. Developing and developed economies like India and China are expected to enhance the overall demand for PDMs by 2032 end. India is expected to have market value of US$ 227.9 Mn by 2022.

Over the 2017-2021 historical period, the global power distribution module market registered a CAGR of 2.1%, and according to the Fact.MR, a market research and competitive intelligence provider, the market is projected to exhibit growth at 7.1% CAGR between 2022 and 2032. 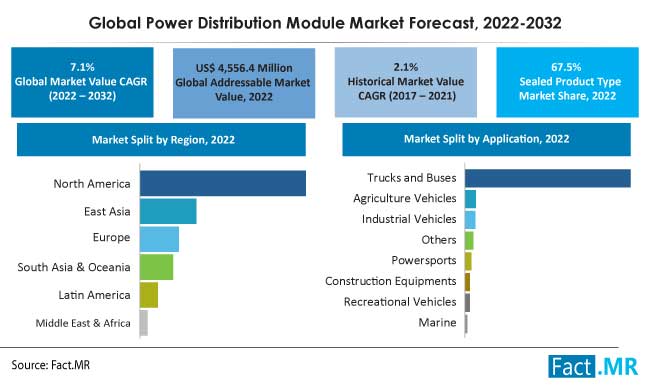 Market share analysis of power distribution module based on application and region is provided in a nutshell in the above image. Under the application segment, the trucks and buses sub-segment will dominate with 78.8% market share in 2022.

The economies globally are now implementing a stringent set of regulations on CO2 emissions and NOX emissions from commercial as well as personal vehicles. There is a need to restructure the freight and transport industry to make this happen as the majority of commercial vehicles already in running are exceeding the emission norms.

Countries and governments have now started becoming more serious about the climate change issue and are trying to come up with solutions to battle the situation in every possible way. The European Union has implemented strict regulations on CO2 and NOX emissions and further mobilizing ways to tighten these stringent regulations.

Similar norms have been implemented by the United States of America for the same. Different studies have shown that pollution caused by fossil fuels led to the death of 8.7 Mn individuals in 2018. Due to this, there is a need for restructuring the commercial vehicle market and this will lead to an increase in the sales of efficient power distribution modules in electric vehicles which will lead to less CO2 and NOX emissions from the vehicles and boost the demand of the market.

“The Rising Demand from Developing Countries”

For instance, the Government of India has been rapidly spending on increasing the road infrastructure of the country to prop up the network of the large country. This is likely to boost the demand for commercial vehicles in the country and in return for the power distribution modules. India accounts for 47.1% of the market share in South Asia and Oceania.

Furthermore, freight infrastructure spending is omnipresent across several countries and further exhibits the driving demand for power distribution modules in the future.

Technological innovation in the automotive industry is not progressing at a fast pace. One of the reasons for this is that several countries are lagging when it comes to the implementation of these technological innovations that are essential for the growth of the power distribution module market, as a result, its growth is getting restricted.

Developed countries like the United States have already executed self-driving technology in cars. In the U.S., there are about 1,400 self-driving cars in 2021-22. But developing countries such as India, Indonesia, and Brazil are lagging due to a lack of efficiently operating infrastructure in the automation sector.

Self-driving, electric car, and automation technology in the commercial vehicle industry is limited to only a few developed economies. Gearing up with the global pace is likely delayed by a decade and more delay in this will only result in further restricting the growth of the power distribution module market in the high potential markets.

The commercial vehicles industry has been historically subjected to radical changes in regulatory standards. The industry has come a long way from slumping demands in the market to a growth trajectory. However, governments across the globe have implemented regulatory norms on the weight carrying capacity of vehicles to reduce the logistics cost significantly.

Further, reduction in the life of the trucks will hamper the sustainability of the power distribution modules. Moreover, the modules which are already made for standard use will now have to be adjusted according to the new weight carrying capacity which will increase the cost of the modules in the market.

How is China Winning the Race in the Power Distribution Module Market?

Japan is expected to have a market value of US$ 156 Mn by 2022. The development of the regional market is responsible for this growth. IT companies with cloud-based operations have accelerated the market's growth.

How is the U.S. catching up with the Power Distribution Module Innovation in the Market?

The U.S. PDM market is expected to have a market value of US$ 4,106.3 Mn in 2032 and is predicted to grow at 7.1% CAGR during the forecast period. The highly developed IT and telecom sectors are responsible for this exponential growth.

Moreover, with a rise in colocation data centers, the US is expected to witness massive expansion during the forecast period. Industry giants like Microsoft have announced the development of four new data centers in North America which will directly impact the demand for PDMs.

How are Various Power Distribution Module Products Penetrating the Market?

Vehicle manufacturers are in pursuit of adding innovation and the including various integrated smart systems in industrial and commercial vehicles. This move is expected to unlock new growth avenues for intelligent PDMs in the vehicle market. Due to this integration, the market witnessed a market growth of 3.8% CAGR for intelligent PDM during the forecast period 2017-2021.

The sealed power distribution module is the most prominent segment and is predicted to account for about 67.5% of the market share by reaching a valuation of US$ 3,074 Mn by 2022-end. The segment can be further divided into hardware, fuse only, and configurable types. They are mostly preferred in the construction industry and automotive industries.

How has Electrification of Applications Segment Accelerated Market Growth of PDMs?

PDMs are versatile products and find applications in several sectors. Trucks and buses are the major users of PDMs and are expected to have a market share of 78.8% in 2022. With the rising demand for eco-friendly products to reduce emissions and pollution, major pollution-producing markets such as construction markets, industrial markets, and agriculture are finding innovative ways to come up with equipment that performs the same work but with reduced pollution.

To help this cause, electric powered equipment became a buzz word and with the advancements in electric devices, the electric commercial vehicles witnessed a boom and since PDMs play a major role in these vehicles, they are also expected to witness a boom in the future.

In 2020, a company named Littlefuse expanded its DCN line series of high voltage direct current contactors. This will help reduce coil power and help with high voltage relay switching, which would result in efficient power distribution for vehicles.

The global power distribution module market will be valued at US$ 4,556.4 million in 2022.

Worldwide demand for power distribution module is anticipated to reach US$ 9,057.2 Million by 2032-end.

North America will top the global power distribution module market and is expected to account for 51.4% market share in 2022.

Sealed product type of power distribution module is predicted to account for 67.5% share of global sales in 2022.