Global sales of solar powered cars are expected to exhibit 13.5% year-on-year growth rate in 2022 topping US$ 90 Mn. Fact.MR projects the global solar powered car market to surge at 12.3% CAGR due to rising investments in R&D activities related to e-mobility and urban transportation. Monocrystalline solar cells are expected to dominate the market at a CAGR of over 13%.

According to Fact.MR - a market research and competitive intelligence provider, with growing concerns about carbon emissions and increasing use of renewable energy, the solar powered car industry is set to rise at 12.3% CAGR through 2031.

Consumers with high purchasing power have fuelled demand for traditional and high-end solar powered cars on the road. A number of countries’ governments have taken steps to reduce pollution levels by placing limitation on the use of transitional cars, as well as encouraging the use of renewable energy.

Manufacturers are also taking advantage of these solar powered cars by investing heavily in R&D and product development.

Use of solar powered cars, either in personal transportation or in competition-based solar race cars requires high performance and solar panel efficiency.

Several other new features by existing as well as emerging companies are likely to attract more long-mile coverage and maximum use of renewable energy, which is a driving factor for the demand and sales of solar powered cars.

What is Majorly Driving Demand for Solar Panel Electric Vehicles?

Growing concerns regarding carbon emissions by global regulatory bodies is a major factor that is estimated to drive demand for solar powered cars over the coming years. Solar powered cars is the answer to environmental degradation and energy shortages. These vehicles are more efficient and economical as compared to traditional fuel cars.

All kinds of conventional sources of fuel will someday exhaust, which, in turn, is estimated to lead to an increase in demand for alternate fuel vehicles such as solar powered cars. It also helps car owners comply with state regulations regarding emission from fuel systems.

Solar powered cars offer numerous benefits such as no pollution, less maintenance, easy to charge, noise-free operation, and increased vehicle efficiency. These are the best option to the present issue of urban pollution in a simple, economic, and inoffensive manner.

What are the Restraints Stunting Growth of the Global Solar Car Market?

Subsequently, less operational productivity of solar powered cars is a major limiting component that could influence demand for solar vehicles across the globe.

Solar powered cars need to be small and sleek despite the inefficiency of solar panels, as design preferences of customer currently outweigh the importance of functional attributes. Photovoltaic cells are limited in what wavelengths they can turn into electricity, and don’t perform well when they get hot. Even the best solar panels only convert around 23% of incident sunlight into energy.

This could be a major restraining factor and can hamper overall market growth of solar powered cars.

Will Sales of Solar Powered Cars Gain Traction Due to the Maximum Use of Solar Yield?

Adoption of solar panels in a vehicle’s roof with its five square meters can charge the vehicle battery for up to 70 kilometres per day, and there is no need to charge on a daily basis because the vehicle can charge itself.

Manufacturers are building solar cells encased in safety glass, as a sturdy solar roof and hood can live up to rigorous auto industry regulations.

Which Region Offers the Largest Opportunity for Sales of Solar Powered Cars?

With an absolute dollar opportunity of around US$ 155 Mn, Europe is expected to be the most lucrative market for solar powered car manufacturers. The Netherlands is leading the European market and is expected to witness triple-digit growth during 2021-2031.

Change in lifestyles as well as increasing awareness about the environment and carbon emissions is driving the solar powered market in the region. Furthermore, the region is home to many key manufacturers of solar panel cars, which is another major reason why it has a significant market share. 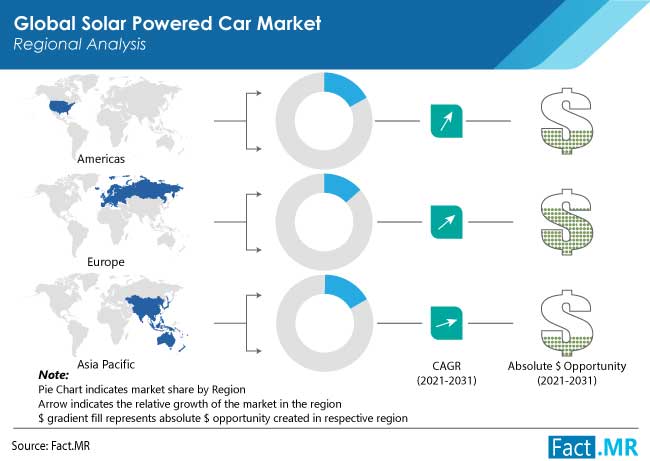 What is the Opportunity for Solar Powered Cars in Europe?

Europe is predicted to remain one of the most attractive markets during the forecast period, according to Fact.MR. According to study, the Netherlands is expected to account for over 35% of the Europe market in 2031.

Furthermore, the Netherlands remains one of the world’s largest markets for use of renewable energy transportation and e-mobility, making it a lucrative market for solar powered car manufacturers. Besides, rising concerns of carbon footprint, growing overall population, and increasing traffic in Europe will drive the growth of the market.

Why is Demand for Solar Powered Cars Increasing across the Americas?

Demand in the Americas is expected to rise at a CAGR of around 13% over the forecast period. The Americas e-mobility industry is backed by well-developed infrastructure, and it is largely supported by governments. It is not surprising that the U.S. has the most elevated level of expenditure in the Americas.

As per the report, the U.S. is recognized as a primary market and is expected to continue exhibiting high demand for solar powered cars. Moreover, rising research activities, presence of several major players, and increasing pipelines are creating attractive opportunities for solar powered car manufacturers in the country.

How is South Korea Faring in the Market for Solar Powered Cars?

South Korea is one of the emerging countries for solar powered cars. In 2021, it is expected to account for over 28% market share in Asia Pacific.

South Korea has been rapidly deploying advanced digital technologies in manufacturing to optimize the potential of its manufacturing process. Furthermore, increased investment R&D activities and growing development in solar cell technology such as increase in efficiency of solar cell and battery technologies are likely to have a positive impact in the country.

With growing infrastructure and population and changing economic regulations in terms of emission controls, South Korea is projected to become a lucrative market for solar powered car suppliers over the coming years.

Monocrystalline solar cells is the leading category and expected to account for nearly 85% of the market by 2031. The cell is composed of a single crystal, and the electrons that generate a flow of electricity have more room to move.

As a result, monocrystalline solar cells are more efficient than other types of solar cells, and their market is likely to see an upward trend over the coming years.

Which Type of Battery is Used Most in Solar Powered Cars?

Lithium-ion batteries are used significantly because of high charging-discharging efficiency, high charge density, and light weight as compared to lead-based and other battery types. The segment is estimated to dominate and account for over 90% share through 2031.

The need of lithium-ion batteries is to provide better performance, low maintenance, and be environment friendly, which is why these batteries are used the most in solar powered cars and are expected to experience high sales over the coming years.

Majority of companies have focused on product launches and expanding their manufacturing units in developing regions. Strategies include innovation, collaborations with key players, partnerships, strategic alliances, and strengthening of regional and global distribution networks.

Similarly, recent developments related to companies manufacturing solar powered cars have been tracked by the team at Fact.MR, which are available in the full report.

How much is the global solar powered car market valued at currently?

The global solar powered car market is currently valued at US$ 80.7 Mn.

What is main factor driving demand for solar powered cars?

What will be the demand outlook for solar powered cars through 2031?

What are the key trends being witnessed in this space?

Minimizing energy use and maximizing solar yield, and usage of lightweight materials to enhance vehicle performance are key trends in this landscape.

Who are the top 5 manufacturers of solar powered car?

Lightyear, Sqaud Mobility, Sono Motors, Toyota Motor Corporation, and Aptera Motors are the top 5 manufacturers of solar powered cars, as per ratings on the basis of market share, market reach, and clientele.

At what rate is the market registering growth in the Americas?

The market for solar powered cars in the Americas is projected to expand at close to 13% CAGR.

Which are the top 5 countries driving most of the demand for solar powered cars?

The Netherlands, Germany, the U.S., Canada, and South Korea are the major demand centers for solar powered cars.

At what rate is the market in the Netherlands for solar powered cars growing in Europe?

Demand for solar powered cars in the Netherlands is set to increase at a CAGR of 10.5% over the next ten years.

How is the solar powered car market faring in Japan and South Korea?