The global in-vehicle AI robot market is worth US$ 38.8 million at present and is anticipated to surge ahead at an astonishing CAGR of 17.3% to reach US$ 190.7 million by the end of 2032.

AI, for quite some time now, has become an integral part of our day-to-day lives. With increasing applications of AI in ICT, financial services, healthcare, and many other industries, integration of AI in automotive is not far behind. The recent past has seen enormous advancements in automotive manufacturing, transportation, and services in adhesion with AI.

Increasing adoption of such safety features has guided a growth rate of 21.3% for the in-vehicle AI robot market from 2021 to 2022.

Although the automotive industry is categorized as a new adopter in terms of AI technology implementation, rigorous study in the field is expected to garner huge growth opportunities over the coming years. Fact.MR says that the global in-vehicle AI robot market will be valued at US$ 190.7 million by 2032-end.

According to Fact.MR, a market research and competitive intelligence provider, the market for in-vehicle AI robots is projected to boom at 17.3% CAGR between 2022 and 2032. 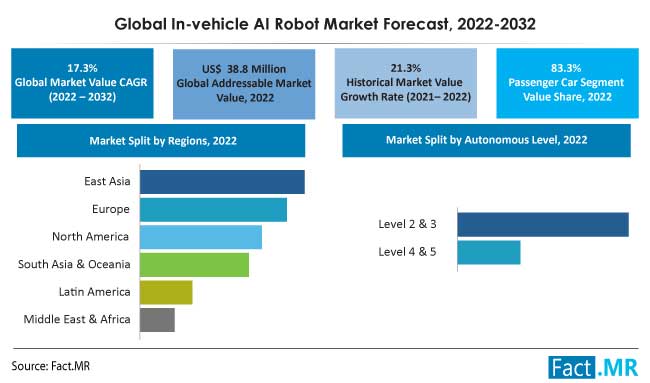 Around 80% of people utilize a private or public vehicle for transportation worldwide. Artificial intelligence is increasingly being used in the automotive sector. The safety of drivers and passengers is now a priority in this sector.

Manufacturers are offering technologies such as automated braking, drowsiness alert systems, speed control alert systems, and internal & external monitoring systems to assure driver safety and prevent unintentional harm. Monitoring systems in cars keep an eye on how well they are running and also alert the driver when an emergency is nearby.

Makers have specifically targeted the audience that uses personal vehicles by including all these safety measures. It has been seen that North America experiences 30% fewer car accidents after the installation of AI systems in vehicles. With this emerging growth of technology and safety, the market for AI-powered vehicles is set to grow rigorously over the coming years.

AI acts as an artificial brain and warns the driver about the smallest defect in the vehicle, which reduces heavy future expenses for end users. These features provided by manufacturers are useful to both customers and manufacturers, which will act as a market driver in the future.

What is Denting Market Growth to Some Extent?

Countries such as Brazil, India, Bangladesh, South Africa, etc., are at a developing stage; they do not have a well-established and developed technology background. A part of these developing countries are aware of the ongoing and upcoming technologies, but not everyone.

Most AI-powered vehicles need good Internet connectivity to gather and process information by forming neural networks. For autonomous and semi-autonomous vehicles to run on the road, defined and properly constructed pathways are required. Most developing countries lack this kind of resources, and hence, manufacturers restrict themselves to developed countries only, which can hamper the sales of such vehicles and can result in market downfall.

Why Does the U.S. Dominate the In-vehicle AI Robot Market?

Artificial intelligence (AI) is being used by American automakers in almost every aspect of vehicle production. Robots are assembling the basic parts of an automobile or an autonomous vehicle using machine learning and vision to safely navigate traffic and are creating significant revenue for North American players.

In the next 8 to 10 years, it's anticipated that the demand for autonomous vehicles will increase as AI becomes more widely used. According to Fact.MR data, sales of autonomous vehicles reached 36 million units in 2021 and are projected to climb to 89 million by 2030, at a CAGR of 8%-10% between 2021 and 2032.

Automobile manufacturers have been adding new features to their line-up of vehicles in response to changing user demands as they prepare for massive upheaval. For instance, BMW worked with Chinese technology business Tencent. They are collaborating to build level 3 or semi-autonomous cars in China.

For OEMs to remain competitive, it is anticipated that there will be an increase in partnerships, acquisitions, and collaborations across the Chinese automotive sector in the near future. With driver risk assessment, improved infotainment systems, and driverless vehicles, AI is transforming the transportation industry. Technology corporations are currently leading the way, using their AI expertise (from developed industries such as ICT) to dominate the Chinese autonomous car market.

There is a high number of passenger vehicles across regions of the world. Increase in the standard of life is demanding comfort, not only in the surrounding environment but also in vehicles. AI is primarily being integrated into passenger vehicles by major automotive giants such as Tesla, BMW, MG, etc. Further, in-vehicle AI robots include innovative products and features that make life easy and safe.

Will 4 & 5 Autonomous Level Remain Most Preferred?

The market for in-vehicle AI robots will experience a huge demand for fully automated vehicles in the near future as the population is more attracted to new emerging technologies, safety, and automaticity. The level 4 & 5 type of autonomous driving vehicles include features such as no human interference required, automatic decision-making capacities on the road, temperature & pressure-controlled systems, etc. However, the biggest challenge for manufacturers is to secure all the operational data and systems as they can be hacked and hamper the safety of passengers.

Fact.MR’s analysis suggests that manufacturers should invest more in research and development and establish a stable under-controlled system in level 4 & 5 autonomous vehicles.

Key market players are resorting to organic as well as inorganic growth strategies such as product innovation and new product launches to keep their hold on the market in the long term.

What is the in-vehicle AI robot market size in 2022?

The global in-vehicle AI robot market is currently valued at US$ 38.8 million.

How is the market for in-vehicle AI robots expected to evolve?

Over the past 4 years, demand for in-vehicle AI robots increased at 21.3% CAGR.

Which region leads the global market for in-vehicle AI robots?

How is the commercial vehicle segment faring in the in-vehicle AI robot market?

The global vehicle tracking system market is projected to grow steadily at a CAGR 13.7% value, and i...

The global vehicle roadside assistance market is expected to grow at over 3% CAGR during the forecas...

All-Terrain Vehicle Market is expected to surpass a valuation of US$ 4 billion by 2031. Gasoline bas...

Vehicle anti-theft system market expects to reach US$ 16.2 Billion by 2027. Demand for immobilizers ...