The demand for organic honey and flavoured honey has increased the sales of honey in various regions.

In addition, the health benefits of honey have proved to be an alternative for other sweeteners. The use of honey in various food and beverage products is driving the sales for honey.

Historically, between 2016 and 2020, honey sales reached nearly US$ 9 Bn by the end of the aforementioned period, clocking a CAGR of 4%. Manufacturers are capitalizing on imbuing flavors with multifunctional nutrients, given the paradigm shift observed in consuming healthy food products.

According to Fact.MR- a market research and competitive intelligence provider- global honey sales inclined significantly amidst the COVID-19 pandemic. A series of studies conducted during the tumultuous year concluded that honey possesses numerous healing and immunity boosting properties, capable of imparting resistance to several bacterial, viral and fungal infections.

Moreover, the rising usage of natural sweeteners in the organic confectionary and bakery products is expected to leave an optimistic impression on the honey market. Attributed to these trends, honey sales are expected to observe positive growth, reaching US$ 15.2 Bn from 2021 to 2031, registering a CAGR of 5.1%. 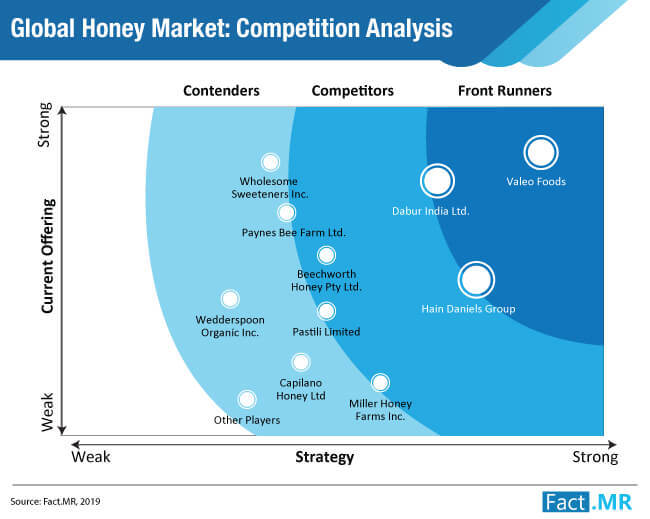 How is the Healthcare Sector Spurring Demand for Honey?

With sedentary and hectic lifestyle of consumers across the world becoming ubiquitous, consciousness about maintaining healthy lifestyles is inclining significantly. Hectic lifestyles have taken time away from exercise, thus compelling consumers to opt for low sugar food items.

The belief that every organic and natural food is good and safe for health is prominently influencing the thought process of consumers across the world. Research has concluded that honey possesses high levels of antioxidant, antimicrobial and apoptotic activity inducing compounds, rendering their uptake high for various pharmaceutical applications.

Companies are emphasizing on the production of monofloral honey, as it is touted to offer a broader range of benefits, containing the highest level of minerals (4060 mg/kg). For instance, Gale’s Honey is specially recognized for providing honey products. The company sells Gale’s honey mainly in 300g jars to capture the retail market in the European region.

What Growth Prospects Abound in the U.S Market?

The U.S is anticipated to emerge as a highly opportunistic market for honey and honey products. According to Fact.MR, the region is expected to register a CAGR of 6% from 2021 to 2031.

According to the U.S Department of Agriculture, honey consumption continues to increase, with an average of nearly one pound (0.9 pounds) being consumed as of 2016, compared to 0.5 pounds per capita as of 1990.  It further discovered that consumption of all caloric sweeteners has been declining for the past 15 years.

Additionally, the apiculture industry contributes over US$ 14 billion to overall U.S crop production. Also, by 2017, overall honey consumption rose to 596 million pounds, or about 1.82 pounds per person. This increase is attributed to the major health benefits associated with its consumption.

Why is Honey Gaining Traction in the European Market?

As per Fact.MR, Europe comprised of the largest revenue share, exceeding 33% in 2020. According to the European Commission, nearly 3/5th of the honey consumed is produced domestically.

A considerable number of European consumers from Germany and France prefer to purchase honey labelled as “natural” and “organic”, reflected in the form of increased shelf space across major sales channels for honey and honey-based products.

Furthermore, manufacturers are investing massively in maintaining production and supply chain. In January 2018, Turkey-based honey producer, Alt?parmak, received almost US$ 5 million in funding from the European Bank for Reconstruction and Development to develop and advance its in-house value chain

Why is Asia Attracting Honey Manufacturers?

Asia is a highly opportunistic market, with bulk of the consumption arising in China. In the recent past, China has been actively focusing on growing its beekeeping industry with an objective of the growing domestic demand as well as expanding its honey export footprint. Besides, the use of honey in food and beverage applications, China uses them significantly in modern medicines.

For instance, honey reduces the free oxygen radicals which in turn increases immunity and reduces the risk of cardiovascular diseases. Natural honey also has flavonoids which along with phenolic acids work together to provide antioxidant effects in the body. A revenue share of 30% is projected for the Asian market.

How is the Honey Industry Growing in Middle East and Africa?

Famous for its thickness consistency, sweet taste, and medicinal properties, honey produced in some of the Middle Eastern countries as well as some African countries is considered to be of the best quality.

Middle Eastern countries, especially Turkey, Lebanon, and Yemen, are leading the honey market in the MEA region with consistently increasing production and demands for honey, over the past few years. This had led to the honey industry gaining profit in sales in upcoming years. Thus, the honey industry is expected to surpass 20% in the forecast period.

Why is Food & Beverage the Dominant Sales Channel?

According to Fact.MR, honey sales through food & beverage channels accounted for 70% of total revenue in 2020, and is likely to retain this dominance across the assessment period.

Extensive applications across bakery products, non-alcoholic and alcoholic beverages and instant foodstuffs has led to extensive uptake in the food & beverages domain.

Why the Inclination towards Organic Honey?

By nature, consumption of organic honey is mushrooming to a major extent since the past several years. An increasing tilt towards consuming naturally sourced food products amid rising health consciousness is driving adoption.

According to estimates by Fact.MR, organic honey is likely to be valued at approximately US$ 150 Mn by 2022. Various types include clover, manuka, sourwood and buckwheat among others.

How much is the honey industry worth?

What was the last 5 years CAGR for the honey industry?

How much is the honey market like to be valued by 2031?

What are the key trends driving honey sales?

Flavoured honey and the easy availability of honey are the key trends driving the sales of honey.

How opportunistic is the market in the U.S?

According to Fact.MR, honey sales in the U.S are expected to surge at a CAGR of 6%

Who are the prominent honey market players?

What are the prospects for honey sales across Europe?

How much is the Asian honey industry worth?

Which is the most preferred honey by nature?

Demand for organic honey is expected to surge, reaching around US$ 150 Mn by 2022