The global cannabidiol (CBD) market will hit US$ 3 Bn by 2021. The market for cannabidiol products further expand to surpass US$ 34 Bn by 2031, expanding more than 11x, thanks to rising demand for full legalization and a ready consumer base.

The global market for CBD was worth US$ 2.9 Bn in 2020, expanding at an impressive CAGR. The demand for cannabidiol (CBD) for health and wellness purposes is strong due to its therapeutic characteristics, which is a major factor driving market growth.

Furthermore, increased product acceptance and use as a result of regulatory approvals are likely to promote CBD-infused product production.

A growing understanding of CBD's therapeutic potential has inspired a buyer to purchase cannabidiol products regardless of price. Commercial merchants are now focusing on marketing cannabis-based items since they offer a higher profit margin.

According to Fact.MR- a market research and competitive intelligence provider- the market is predicted to increase nearly 28% CAGR from 2021 to 2031. 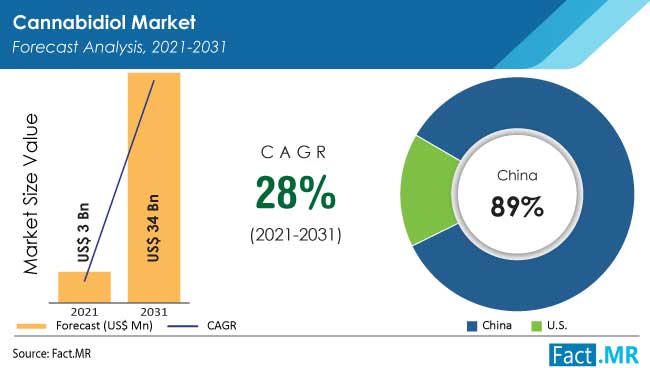 How is Alleviation of Restrictions Fuelling CBD Products Demand?

Cannabis comprises over 100 chemical compounds known as cannabinoids, with the most common among them being CBD and THC. The World Health Organization’s Expert Committee on Drug Dependence (ECDD) published a report in 2017, which acknowledges clinical employment of CBD to be the most advanced treatment of epilepsy.

CBD is perceived to have significant therapeutic value for seizures on account of epilepsy and relevant conditions. In addition, clinical trials conducted on CBD have depicted its efficacy in treatment of various forms of epilepsy. Based on this development, countries are seeking to incorporate CBD-based therapeutics which will significantly generate demand.

By 2028, marijuana based cannabidiol industry is expected to be worth US$ 31 Bn. CBD is derived as an oil or a powder from marijuana plants. These can be blended into lotions or gels, or put into capsules and ingested or applied to the skin.

Tetrahydrocannabinol (THC) is also used in the creation of medications to treat neurological illnesses like dementia, Alzheimer's disease, epilepsy, and other conditions. Because of its psychotropic characteristics, THC is heavily restricted in the majority of countries; as a result, it is expected to grow slowly in comparison to hemp.

Cannabidiol is well-known for its ability to cure a variety of illnesses, including anxiety, seizures, neurological problems, cancer-related nausea, chronic pain, and more. Despite being useful for a variety of medical illnesses, studies and research conducted by numerous organizations have shown that CBD-based medicines can nevertheless have minor negative effects.

Dry mouth, drowsiness, low blood pressure, and lightheadedness are just a few of the negative effects experienced by consumers. CBD is also known to raise the level of coumadin (a blood thinner) in the body, which can interact with other drugs and cause negative side effects. These factors might impede future adoption of CBD for therapeutic purposes.

Demand of CBD in Pharmaceutical Applications

Top CBD companies are promoting it as a ‘no-side effect’ ingredient in pharmaceutical drugs, which makes it a viable alternative to THC (Tetrahydrocannabinol).

While THC shows its effect in the central nervous system (CNS), cannabidiol does the same in the immune system.

Nevertheless, Cannabidiol and THC, after combining in equal ratios, complement each other’s positive impacts – the “entourage” effect, which can influence emerging trends in the cannabidiol market in the coming years.

Apart from pharmaceuticals, Cannabidiol is steadily finding its way in eateries and breweries as well as an ingredient in mocktails, sodas, and others, owing to its anti-anxiety impact.

However, government bodies across the world are imposing restrictions on the addition of cannabidiol in beverages and food items amid anecdotal clinical evidence, despite the industrial hemp having received a green signal, leaving consumers bewildered about the effects of Cannabidiol.

Furthermore, legal agencies are confiscating consumables offered by restaurant owners, and food manufacturers, which may impact the growth of the cannabidiol market in the coming years.

Improving Accessibility to CBD-based Therapies: WHO Report Aids Alleviation of Restrictions on Cannabidiol

Cannabis comprises over 100 chemical compounds known as cannabinoids, with the most common among them being CBD and THC. The WHO’s Expert Committee on Drug Dependence (ECDD) published a report in 2017, which acknowledges clinical employment of CBD to be the most advanced treatment of epilepsy.

CBD is perceived to have significant therapeutic value for seizures on account of epilepsy and relevant conditions. In addition, clinical trials conducted on CBD have depicted its efficacy in treatment of various forms of epilepsy.

ECDD’s conclusion states that current state of research with regard to scheduling of CBD is not justified, and it could impact accessibility for medical and scientific research.

ECDD’s impending final recommendations, to be published soon, will reaffirm or reinforce these conclusions, in order to alleviate legitimate basis for Secretary of Department of Health in maintaining present restrictions on CBD. This will not only relieve burden from companies developing medicinal products, but also improve access for consumers to effective and novel therapies.

In the following decade, manufacturers in the Cannabidiol industry will focus on strategic acquisitions, collaborations, and new launches.

How much is the global market for CBD worth?

As of 2021, the global market for CBD will be valued at US$ 3 Bn as per a recent Fact.MR study

At what rate will the global market for CBD expand through 2031?

What is driving the market for CBD currently?

Which is the most preferred CBD form in the market?

CBD processed oil is highly preferred, expected to surge at around 8% CAGR until 2031

Which is the top selling CBD category based on source?

Which is likely to be the dominant CBD application industry?

What prospects abound across the U.S CBD market?

The U.S is anticipated to account for nearly 40% of CBD demand across North America

What is the anticipated future market outlook for CBD?

According to Fact.MR, future CBD sales are expected to reach US$ 34 Bn by 2031

What was the historical performance of the CBD industry?