Demand for nylon synthesis is projected to increase at a higher CAGR of 6.7% from 2022 to 2032. Widespread usage of nylon synthesis, which has qualities such as high tensile strength, higher friction and abrasion resistance, fuel and oil resistance, electrical insulating properties, and corrosion resistant, has driven up demand for adiponitrile across the world.

Adiponitrile, known as hexanedinitrile, is a colorless organic liquid. It is most commonly used as a foundation for the polymer nylon 66, which is noted for its great durability and has a variety of uses such as in conveyor belts and electrical components.

Hydrogenated adiponitrile usage as a chemical intermediary involves the use of curing agents in epoxy resins and elastomers. Nylon 66 is a popular engineering resin, which is largely used in the production of interior and exterior components in automobiles to reduce their weight and bolster fuel efficiency.

Further, adiponitrile also finds increasing usage in the development of high-performance textiles, besides widespread use in battery electrolyte formulations.

All these factors are expected to drive adiponitrile market expansion at 6.2% CAGR from 2022 to 2032. 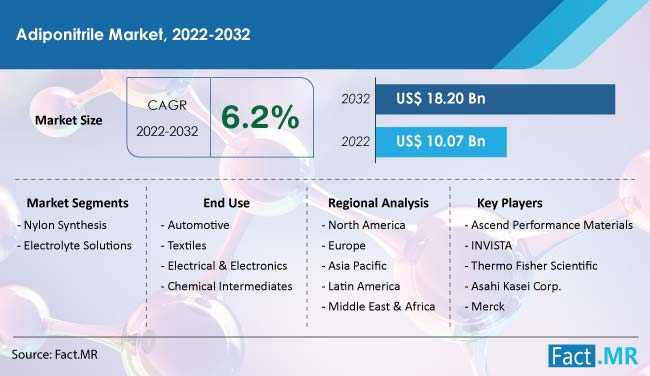 Which Latest Market Trends are Fuelling Sales of Adiponitrile?

The transition towards electric vehicles in both, developed and emerging nations, will boost the growth of existing IC engine vehicles, as well as the market for adiponitrile over the forecast period. Due to the rise in vehicle production, demand for auto parts is growing, which will thereby drive adiponitrile market growth.

Due to strengthening of the textile industry, applications for rugs, mats, and apparel fibers are expected to continue to grow. This will almost definitely be a major driver of adiponitrile demand over the coming years.

Demand for adiponitrile is being fueled by its increasing use in the textile and healthcare industries. Adiponitrile demand has risen due to its use in the manufacture of personal care products, rising disposable income, and beauty and wellness trends, particularly in emerging economies.

Which Challenges Hamper Demand for Adiponitrile to Some Extent?

Governments across the world are concentrating on ways to reduce pollution and global warming. Government rules such as Odd-Even, which regulate vehicle movement in cities to reduce pollution, have encouraged individuals to travel more by commercial vehicles, which will eventually demotivate them from purchasing personal vehicles.

Adiponitrile is used to make tire cables, linings for hydraulic brake lines, molded parts, and other items; therefore, a decline in the number of people buying new cars will hurt market demand for adiponitrile end products.

Why is North America Expected to Lead the Adiponitrile Market?

North America accounts for 32.4% share of the global adiponitrile market, attributed to the presence of large-scale manufacturers such as Invista and Ascend Performance Chemicals, and the high demand for adiponitrile to produce nylon 66.

Rising urbanization, increasing consumer spending, presence of key adiponitrile manufacturers, and process innovations are some of the reasons driving market expansion. Growing use of this technology in the textile, construction, chemical, and personal care sectors is fueling market expansion in the region.

What is the Adiponitrile Market Scenario in the U.S.?

The U.S adiponitrile market is expected to rise at a high CAGR of 6.4% from 2022 to 2032. Market growth is supported by increased automotive penetration, growing hydrogenated adiponitrile sales, and rising initiatives to promote the usage of electric vehicles.

China holds 45.3% share in the APAC adiponitrile market. The need for tire cords will continue to rise as the automotive industry expands at a steady rate. The adiponitrile market is also on the rise in China due to the wide availability of lower-cost production facilities.

The market in China is rapidly gaining traction with the growing consumption of adiponitrile in the production of automotive parts, with different OEM manufacturers generating demand in the country. Prominent international manufacturers have started to push their production facilities in China in a bid to cut down production costs and meet market demand effectively.

Nylon synthesis has superior characteristics in high-temperature applications, making it ideal for a wide range of applications. Carpets, textiles, tires, gear wheels, plugs, car fuel filters, and radiator housings are some of the primary applications that require high temperature and strength.

Nylon 66 is suitable for swimwear due to its lightweight and waterproof nature. Adipic acid, which is utilized in polyurethane applications such as auto seats, footwear, and thermal insulation, is made from adiponitrile. The market is driven by the need for nylon synthesis, which uses almost all of the adiponitrile produced.

Which End Use is Expected to Gain Momentum?

The automotive industry is expected to rise at a CAGR of 7% over the forecast period. Highest application of adiponitrile can be attributed to the manufacturing of automotive components, followed by textile production. High strength, low weight, and superior heat resistance characteristics are expected to result in the substitution of conventional materials such as aluminum in vehicles and the use of synthetic polyester yarns in textile industries.

Polyamide 66 finds use in more than 70 applications in the automotive industry, including the production of essential parts such as engine covers, radiator tanks, and other components, which were conventionally made from metallic materials.

The rapid spread of coronavirus had a major impact on global markets. A global crisis for all sectors, including automotive, which was hit by slowing demand in adiponitrile production and exports, slowed down the hexanedinitrile market.

Several market players are now focused on adiponitrile production analysis. The use of this organic component in high-end applications, including laboratory testing and analysis, has boosted the worldwide adiponitrile market growth.

Top companies in the adiponitrile market use new product launches, acquisitions, and R&D activities as important strategies. Many adiponitrile producers are working to improve their manufacturing efficiency across all formats.

The global adiponitrile market was valued at US$ 9.65 billion in 2021.

The Germany adiponitrile market is expected to exhibit a high 7.3% CAGR over the forecast period (2022-2032).

The U.S., Germany, Japan, China, and the U.K are expected to drive most demand for adiponitrile.

By the end of 2032, the global market for adiponitrile is predicted to reach a valuation of US$ 18.2 billion.