As per Fact.MR – a market research and competitive intelligence provider, during the historic period 2016-2020, the market expanded at a CAGR of 4%. Economies across the globe are investing in cost-effective and energy-efficient testing of public infrastructure and aerospace & defense instruments. There is a lack of technical expertise among non-destructive testing inspectors in the market.

During the COVID-19 pandemic, prospect declined considerably, considering shortfalls encountered in the global manufacturing landscape due to factory shutdowns. As per the United Nations Industrial Development Organization (UNIDO), by Q2 2020, global manufacturing output declined by over 10%. Eventually, however, prospects exhibited gradual improvement, with an anticipated global output worth 7.7% through 2021.

Leading market players are hence keen on global footprint expansion by forging strategic partnerships with local players and mergers & acquisitions in developing economies. Considering these factors, the global non-destructive testing market is slated to expand at around 6% CAGR over the next ten years (2021-2031), and reach a valuation of over US$ 15.2 Bn by 2031-end.

Emerging economies such as India, China, Malaysia, and Brazil are rapidly undergoing infrastructural developments such as the construction of new bridges, dams, railways, power plants, and refineries. Nuclear power, on the other hand, plays an essential role in generating electricity in many countries of the world. One of the major problems of nuclear power engineering is ensuring a reliable and safe operation of nuclear power plants. In order to solve this problem, the application of non-destructive testing and diagnostics comes into action.

Nondestructive methods are also used in fuel inspection with techniques like ultrasonics, eddy current, radiographic testing, and acoustic techniques.  According to the IAEA studies, the fuel failure rate in the world is around 10-5, which means 1-3 failed fuel rods from 100 000 fuel rods in operation. With the implementation of NDT, the failure rate is decreasing. Around 10% of the world's electricity is generated by about 445 nuclear power reactors.

About 50 more reactors are under construction, equivalent to approximately 15% of the existing capacity. According to the World Nuclear Association, there is a clear need for new generating capacity around the world, both to replace old fossil fuel units, especially coal-fired ones, which emit a lot of carbon dioxide, and to meet increased demand for electricity in many developed and developing countries.

In June 2021, the Export-Import Bank of India (Exim Bank) announced that it has extended a line of credit (LOC) worth US$ 100 million to the Sri Lankan government for the purpose of funding projects in the solar energy sector and assure that the country’s 70% power requirements are met by renewable energy sources by 2030. Considering the aforementioned factors, the demand for non-destructive testing is projected to increase during the forecast period.

Advancements in detection of de-lamination, crushed cores with minimal or no structural invasion are helping manufacturers differentiate product offerings and make the market more competitive. Adaptability of non-destructive testing methods in detecting structural integrity of carbon-fiber, glass-fiber, foam, metal, and glare will strengthen the demand for non-destructive testing within the manufacturing end-use during the forecast period.

How are Increasing Power & Electricity Requirements Spurring Uptake across Asia?

According to Fact.MR, Asia is likely to register the highest growth and be a highly lucrative market during the forecast period. According to the World Nuclear Association, the Indian government is committed to growing its nuclear power capacity as part of its massive infrastructure development programme. The government in 2010 set an ambitious target to have 14.6 GWe nuclear capacity on line by 2024. At the start of 2020, seven reactors were under construction in India, with a combined capacity of 5.3 GWe.

Further, the region offers opportunities for the players in the market owing to the increase in infrastructure spending by the governments. For instance, the largest infrastructure effort in the region is China’s “Belt and Road Initiative” which is a massive infrastructure project that would stretch from East Asia to Europe. Such infrastructure initiatives are propelling the growth of the non-destructive testing market as it helps in detecting corrosion, cracking, and other damage.

Furthermore, Fact.MR projects the region register an impressive 9.5% CAGR through 2031. Booming digital economies such as Indonesia and Singapore are investing heavily in modern infrastructure development which employs comprehensive non-destructive testing.

North America accounts for 32% of the total revenue in the market for non-destructive testing. Growth is primarily attributed to a flourishing real estate sector, which is providing massive tailwinds to the growth of the domestic construction industry.

According to the National Association of Realtors, over 5 million existing homes were sold in 2020. Furthermore, the Association of Real Estate License Law Officials estimates that there are over 3 million active real estate licensees in the U.S. In addition, as of 2019, the construction industry generated US$ 2 trillion in revenue.

In order to ensure these success rates, prominent construction and real estate contractors have leveraged highly efficient construction material, as well as advanced testing facilities to detect and eradicate any defects in the material. This has prompted increased inflow of non-destructive testing service providers. Genesis Environmental Solutions, for instance, received a contract in 2019 to construct a new Kansas City International Airport Terminal worth US$ 1.5 billion, set to be completed by 2023. 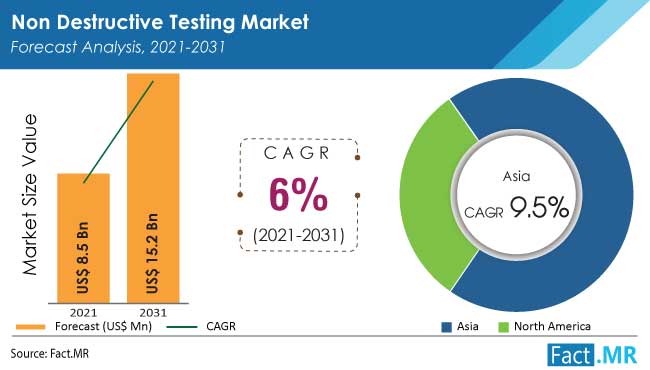 Why is NDT for Manufacturing Purposes Highly Sought After?

Manufacturing is a prime source of revenue with over 20% share of the total market value. Consumer demand for advanced technologies such as the internet of things (IoT), artificial intelligence (AI), and machine learning (ML) in smart devices increases the need for non-destructive testing of products.

On a similar plane, aerospace & defense, and power generation present high-growth prospects with impressive growth trajectories of 8% and 7.5% respectively. Investments in developing advanced military inventories and the need for electricity to power booming digital economies are heightening the demand for non-destructive testing across these domains.

According to Fact.MR, non-destructive ultrasonic testing is likely to capture 1/4th of overall market demand across the 2021-2031 forecast period. Ultrasound is being increasingly utilized to detect internal defects, given its high accuracy rate, portability and ability to travel deeply into the object.

Non-destructive testing is envisaged to account for over US$ 15.2 billion by 2031

The increasing number of power projects is projected to offer significant growth opportunities for sales in the market.

Manufacturing is the most lucrative segment, accounting for 20% of global revenue

According to Fact.MR, non-destructive testing in North America are expected to capture 32% of total revenue

Asia is expected to be the fastest growing market, clocking a CAGR worth 9.5% until 2031