The market for oncology biosimilars is anticipated to surge up at an astronomical pace, registering a CAGR of 11% during the forecast period from, and 2022 to 2032. As of 2021, the market was valued at US$ 4 Billion, and is likely to rise at a Y-o-Y growth rate of 5% in 2022 to reach US$ 4.2 Billion. By the end of the forecast period, the industry is poised to reach US$ 12 Billion.

The increased instances of cancer such as lung cancer and breast cancer, a susceptible ageing population, and an increase in research and development efforts done by numerous pharmaceutical firms have all contributed to the expansion of the oncology biosimilars market. Furthermore, increased patient awareness, advancements in treatment alternatives, and the high cost of biologics pharmaceuticals are some of the factors influencing the need for oncology biosimilars. Nonetheless, product recalls and rigorous regulations are factors impeding the growth of this industry.

Cancer is a lifestyle illness that emerges as a result of aberrant cell proliferation and can result in the creation of a tumor. Currently, the majority of successful cancer treatments is based on biological medications, commonly known as biologics, and comprises both targeted therapies and cancer immunotherapies. These medications are manufactured utilizing live creatures such as bacteria, yeast, and animal or plant cells, and they necessitate complicated production techniques and a lengthy development period.

As a result, the price of these medications is significantly greater, adding to the overall cost of cancer therapy. The creation of biosimilars of branded cancer biologics has grown in popularity as a means of lowering treatment costs. These biosimilars are extremely identical to the reference biologics in terms of efficacy and safety, and their reduced cost can help greatly reduce cancer treatment costs.

Cancer is regarded as the second greatest cause of death worldwide. According to the World Health Organization, 9.6 million people died in 2018. To accommodate such a vast number of patients, pharmaceutical companies have increased their manufacture of cancer therapy medications.

Because blockbuster biologic medications are highly expensive, the ground is set for biosimilar and generic pharmaceuticals to enter the market. Based on these trends, the oncology biosimilars market is expected to grow at a fantastic CAGR of 11% by the end of 2032.

The Food and Drug Administration (FDA) in the United States has been at the forefront of the worldwide oncology biosimilars market's growth. The FDA's approval of various biosimilars has proved beneficial to research firms and organizations. Following 2015, the FDA has been actively approving oncology biosimilars, a trend that is projected to gain traction in the coming years. The FDA has authorized two significant biosimilars: filgrastim-sndz (Zarxio) and bevacizumab-awwb (Mvasi). It will be fascinating to monitor how the increased rate of approvals affects market maturity.

Furthermore, the growing elderly population and environmental degradation have raised the prevalence of cancer globally throughout the years. These causes, together with the rising expense of cancer care, have increased the load on healthcare systems across the world. As a result, governments in a number of countries are encouraging the use of biosimilars as a cost-cutting approach. For example, the United States Food and Drug Administration (USFDA) have created educational materials for clinicians and patients concerning biosimilars. Aside from that, the availability of low-cost medicine has been linked to earlier and wider therapeutic usage, as well as increased patient access. Furthermore, oncology biosimilars may enhance industry competitiveness, perhaps driving down the pricing of biological therapies even further. Other growth-inducing drivers for the market include impending patent expirations of branded biologics and increased R&D activity by biosimilar producers.

What is the Growth Outlook for Oncology Biosimilars in the U.S?

Apotex Inc. has five biosimilars under development. The firms collaborated to bring these medications to market. The US oncology biosimilars market is expected to grow at a CAGR of 10.7%, accounting for more than a quarter of the market.

How do Growth Prospects appear in the Chinese Market?

This impressive growth trajectory is attributed to active collaboration within market giants to expand profit pools. For instance, in 2016, Dr. Reddy’s Laboratories collaborated with TR-Pharm to commercialize the former’s three biosimilars in Turkey. 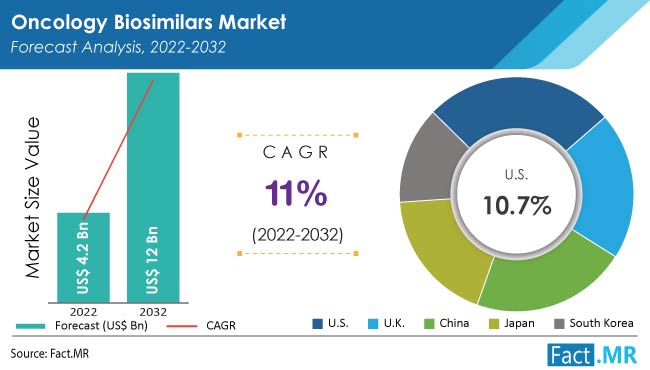 Which is the Most Preferred Disease Indication Type?

The neutropenia sector, on the other hand, is projected to dominate the worldwide Oncological biosimilars market, accounting for more than half of the overall market share. The expiration of patented blockbuster biologics has increased the use of biosimilar drugs in the category. In 2018, the FDA authorized Pfizer's filgrastim-aafi for the treatment of neutropenia in patients undergoing blood cancer therapy. The neutropenia market is expected to grow at a 7% CAGR.

Celltrion, Inc., Dr. Reddy's Laboratories Ltd., Biocon, Teva Pharmaceutical Industries Ltd., and Sandoz International GmBH are the key participants in the worldwide oncology biosimilars market. As a result, it is a highly concentrated market. These market participants collectively account for more than 70% of the market share. To broaden their market footprints, these firms rely largely on active alliances to improve their product distribution networks.

As of 2021, Fact.MR estimated the Oncology Biosimilars market to have reached US$ 3.5 Billion

By 2022, Fact.MR expected demand for oncology biosimilars to reach US$ 4.2 Billion

By 2032, the market for Oncology Biosimilars is likely to be valued at US$ 12 Billion

By 2032, Fact.MR expects the U.S market for Oncology Biosimilars to reach US$ 5.6 Billion

China is expected to register a 7.7% CAGR with regard to the oncology biosimilars industry

Japan is expected to document a CAGR worth 7.5% in the Oncology Biosimilars market

Blood cancer segment will expand the fastest, expanding at a 10% CAGR

*75 figures and 29 tables includes by FactMR