A reagent, also known as an analytical reagent, is a substance or compound that is added to a system in chemistry to bring about a chemical reaction or check to see whether a reaction happens. Although the terms 'reagent' and 'reactant' are frequently used synonymously, reactant refers to a material that is consumed during a chemical reaction.

Furthermore, rising demand for drug discoveries, the requirement for biotechnology research, and the widespread prevalence of infectious diseases are all driving sales of assay kits & reagents. The assay kits' capacity to reduce ambiguity by providing accurate diagnostic results is also boosting sales growth.

Demand for hemato oncology testing services is predicted to expand at a CAGR of 17.5% during the forecast period. This can be ascribed to the rising incidence of leukemia, non-Hodgkin lymphoma, and myeloma malignancies as well as the growing knowledge of cutting-edge medicines such as customized drugs.

In contrast to traditional medicine, precision medicine is a novel approach to healthcare that is known as individualized medicine and is based on each patient's unique genetic composition.

As a result, it is anticipated that the availability of advanced services for the diagnosis of myeloma is likely to drive market growth during the projection period.

Why is Demand for Hemato Oncology Testing Products Progressing Rapidly?

The science involved in the treatment, diagnosis, and prevention of conditions related to the blood, including cancer, is known as hemato oncology. The increasing prevalence of lymphoma and myeloma is boosting the growth of the hemato oncology testing market.

As a result, the rising prevalence of non-lymphoma Hodgkin's and myeloma cancers around the world is increasing the demand for at-home hematology testing products.

Thus, the increasing cases of hematopoietic cancer are boosting sales of hemato-oncology testing products and services.

The massive development of cutting-edge and novel molecular techniques for the diagnosis of hematomas and the growing acceptance of newly developed advanced techniques for the prognosis, diagnosis, and treatment of blood cancer are likely to positively boost the market growth.

The market for hemato oncology testing is also being driven by the growing rate of the elderly population, which leads to an increase in the incidence of hematologic cancer because this group of people is more susceptible to various chronic diseases. For the avoidance of adverse responses in patients and to lower mortality rates, doctors generally prefer medications paired with companion diagnostics because these patients need ongoing monitoring.

It is anticipated that the use of artificial intelligence (AI) in cancer diagnosis will accelerate market growth. Scientists have developed artificial intelligence tools to aid in screening procedures for several cancer types. AI-based computer algorithms have helped clinicians interpret mammograms for more than 20 years, but research in this field is developing quickly.

to detect colorectal cancer in its early stages. What Hurdles & Challenges are Faced by Providers of Hemato Oncology Testing Products & Services?

Currently, the majority of nations' regulatory practices are not well suited to the market for hemato oncology testing. The current regulatory frameworks in such nations were designed for basic diagnostic procedures and are therefore inadequate for the development of innovative biomarker-based diagnostics.

The intellectual property rights of their cutting-edge diagnostic tests are posing difficulties for some market competitors. Even though pharmaceuticals can be patented, many nations still disagree about whether or not biomarkers should also be protected (biomarker detection is fundamental in companion diagnostics).

Issues may come up when licensing the new product to third parties if these entities share ownership of it. The earnings of the diagnostic developer who is a co-owner, for instance, will be impacted if the drug developer wants to license the diagnostic product to a rival diagnostic company. An exclusivity agreement can be struck to prevent these issues, but doing so may also provide other challenges.

For instance, the diagnostic developer may not be able to meet the market demand for the product after the drug developer and diagnostic developer jointly developed it. In these circumstances, the medication researcher will be forced to locate a different partner, which the exclusivity agreement will not permit. 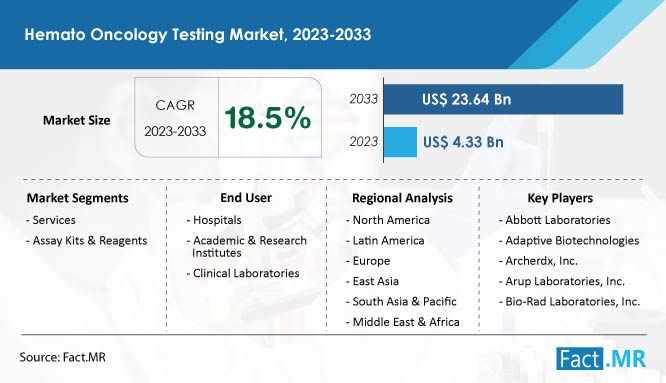 Why is North America Dominating the Market for Hematology Oncology Testing Products?

North America is at the forefront of the development of the global market for hemato oncology testing. The high demand for diagnostic assays and services is being fueled by factors such as the rapid prevalence of hematologic cancer, the increasing rate of the ageing population, awareness of cutting-edge treatment options, and the strong presence of leading companies in the region.

The demand for blood cancer diagnostics in the U.S. is increasing significantly due to quick technological advancements and rising rates of cancer patients. The Americas hematology diagnostics market is expanding due to the rising prevalence of Hodgkin’s lymphoma, teens between 15-19 years of age are the main target patients in the nation. Academic and research organizations in the nation are strongly focused on the development of medical testing procedures.

Thus, the rising rate of blood cancer patients is boosting the demand for hematology oncology testing products and services in the region.

What is Supporting the Sales of Hemato Oncology Testing Technologies in Asia Pacific?

By 2030, cancer cases are expected to increase to around 11 million in Asia, which already bears half of the world's burden of cancer. The increase is most likely the result of a population that is quickly getting older and is more prone to experience chronic disorders. Lung, blood, stomach, and liver cancers are among the most typical kinds of disease experienced in the region by the population.

Asia Pacific market is anticipated to enjoy the fastest growth in the coming years because of the region's large patient pool, affordable access to experienced technicians, and clear regulatory environment that promotes quicker product approvals. Additionally, there will likely be a rise in demand for cancer treatment and diagnostic procedures due to the rapidly expanding medical tourism industry in nations such as China, India, Japan, South Korea, and Malaysia.

What is the Demand Outlook for Hemato Oncology Testing Procedures in Europe?

The United Kingdom, Germany, France, and Italy are some of the leading European countries in the hemato oncology testing market. Europe is considered to be the fastest-growing sector in cancer genetic testing.

The nation's increasing cancer rate has been mostly attributable to binge drinking and heavy smoking. The advancement of cancer research across the nation is greatly aided by strong institutional frameworks such as the German Cancer Consortium and major University Medical Center-based Comprehensive Cancer Centers (CCCs).

Also, the presence of strong research organizations, advanced healthcare facilities, and rapid advancements in the production of hemato oncology diagnostic equipment is generating potential opportunities in the hemato oncology testing market in the European region.

Which Technology is Highly Popular in This Industry?

Demand for NGS-based testing in oncology is expected to increase rapidly during the forecast period, as this technology has many benefits, including improved sensitivity and specificity.

As a result, it is also projected that an increasing number of FDA approvals for assays based on NGS is likely to boost market growth.

Key players in the hemato oncology testing market are focused on developing advanced testing technologies. The sector is competitive and to maintain their market position leading companies are adopting strategies such as collaborations, mergers, new product launches, and more.

Demand for assay kits & reagents is predicted to increase at a CAGR of 20% during the forecast period.

Worldwide hemato oncology testing demand is valued at US$ 4.33 billion in 2023.

Global sales of hemato oncology testing products are projected to reach US$ 23.64 billion by 2033.