As per latest industry analysis published by Fact.MR MR - a market research and competitive intelligence provider, the global tractor market is expected to reach valuation of around USD 137 Billion in 2022. The tractor sales are slated to accelerate at a steady CAGR of 3.4% to reach USD 192 Billion by 2032. The demand for hydraulic type of mechanism is likely to increase with a CAGR of 3.8% over the assessment period of 2022 to 2032. The global agricultural equipment market was valued at USD 190 Billion in 2021, whereas the tractor market was valued at USD 133 Billion in 2021, with a total holding of 43% in the global market.

Tractor application in the agriculture sector remains significantly high. Also, rising level of awareness about benefits of tractor in modern agriculture sector usage among farmers in South Asia and Latin America has helped to drive their adoption. Advances in agricultural machineries including tractors are allowing farmers to reach greater production volumes. The 60 to 140HP engine type segment is likely to dominate with a market share of 34% by the end of 2032, owed due to surge in agricultural sector, where mid-power of engines are widely used.

As the world’s food consumption continue to rise, farmers face a tough task of improving their overall crop yield. The trend of mechanization of agricultural tasks is gaining tremendous momentum, which is propelling the sales of tractors around the world. The modern tractors are more efficient and can also be utilize in a wide variety of non-agricultural implementations.

How Increased Non-Agricultural Application to surge the sales of Global Tractors?

Over the years, the use of tractors for non-agricultural purposes has grown quite significantly. Apart from farm operations, the tractors are being increasingly deployed in construction areas, road making, brick kilns, sand mines and even for commutation purposes.

How the Growth in Agricultural Equipment Industry Creating Opportunities for Tractors?

There has been an insistent increase in the implementation of agricultural equipment with a view to ensure good return on investment. This also produces a more viable business structure for farmers. However, the purchase factor of agricultural equipment including tractors still remain unsatisfactory in several regions of the world, particularly in developing countries.

To address the issues, governments in developing economies like India and Brazil are presenting policies that are directed for better access to modern agricultural equipment for farmers. Moreover, farmer subsidiary on equipment cost, improved availability of credit, emergence of contract farming, focus on maximizing productivity and opportunity for employment in urban areas is proving an impetus to the agricultural equipment industry.

How High Cost and Lack of Skilled Labor Impacting the Global Market?

The manufacturers face the challenge of reducing the overall cost of manufacturing. From a farmer’s point of view, product efficiency is important but the affordability matter the most.

The cost remains one of a major factors that impact the sales of global tractors. Meanwhile, the lack of operating knowledge of end-users is also emerging as a hurdle for the global tractors market. Increase sophistication of tractors has added more operation complexities in them.

What is the Regional Outlook for U.S based Tractor Market?

As the regional demand for tractors grew to a single-digit percent per year, developed economies such as the U.S registered a counterbalance with strong economic recovery. Mid-horsepower range of tractors are being witness a considerable growth in adoption as U.S farmers continue to cultivate small pieces of agricultural lands. Within the next decade, U.S market will exhibit a revolutionized adoption of self-driving tractors. The region is characterized as pioneer in the market with a market share of more than 70% in 2022 holding in North America region.

How is the Demand for Tractors Shaping Up in Brazil?

Leading economies like Brazil in Latin America is showcasing a growing uptake for commercial agriculture as the presence of subsistence farming continues to dwindle.

Being one of the world’s major producer of high-value crops and fresh produce, Brazil demands higher adoption of heavy fieldwork machines such as tractors. In the near future, the special subsidy schemes for small family farms will have a considerable role in boosting the sales of tractors across Latin America. 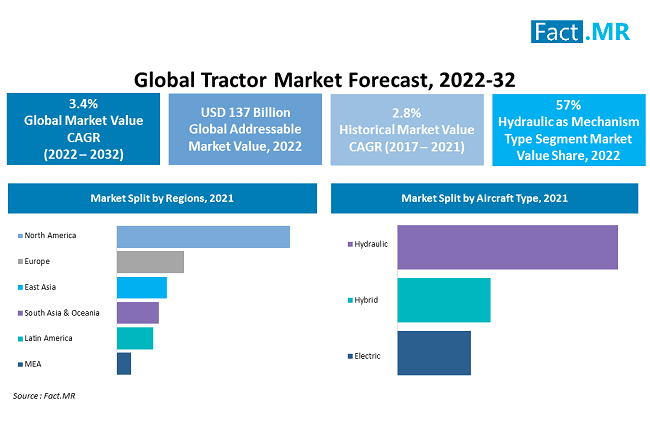 How the adoption of 60 to 140 HP Engine Type among Farmers to Pave the Way for Market?

High crop production provide a threshold to large-scale farming which is driving the adoption in the global agricultural landscape. To meet the requirements of tilling and ploughing across large farms, tractors with high power engines are witnessing a growing demand. The report estimates that 31% of tractors sold globally will be equipped with 60-140 HP engines by the end of 2022.

Which is the Most Profitable Mechanism Type in the Market?

Considering their usage as heavy fieldwork equipment, tractors developed on hydraulic systems provide key advantages in terms of fluid transmission, fuel consumption and simple operability. The adoption of hydraulic tractors is pegged to remain economical for farmers in the years to come. By the end of 2032, the 59% of tractors sold will be hydraulic type of mechanism.

The report sheds light on leading manufacturers of tractors, along with detailed profiles of mentioned companies. Up-to-date and essential data related to market players & suppliers who are mostly involved in offering tractors have been brought with the help of a complete view of dashboard.

Similarly, recent developments by top providers of tractor have been tracked by the team at Fact.MR, which are available in the detailed report.

What will be the valuation of Market in 2032?

The global market is likely to be worth more than USD 192 Billion by the end of 2032.

What will be the forecast CAGR of Market?

What was the historical CAGR in Market?

What is driving demand for the Market?

The industrial revolution and rapid adoption of new-age agricultural techniques is expected to drive the demand for tractor.

Who are the top 5 players in the Market?

Which are the top 5 countries driving demand for Tractors?

What is the Outlook for North America based Tractor Market?

At what rate is Tractor sales expected to increase in Europe?

Which segments is dominating in Engine Type of Tractor?