According to a new study by Fact.MR, the driver alert systems market exceeded US$ 27 Bn in 2020. Growing focus on reducing accidents, combined with innovation in technology continues to create opportunities in this market. 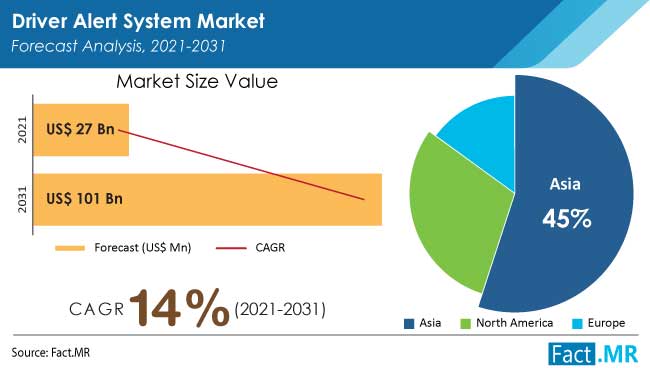 As per Fact.MR’s report, from 2016 to 2020, the driver alert system industry expanded at around 10% CAGR, surpassing a market value of US$ 27 Bn by the end of the aforementioned period.

Manufacturers of driver alert systems are focusing on understanding the well-being of drivers while they are driving vehicles. Thus, to avoid road accidents due to fatigue and drowsiness, cameras and sensors are used on a large scale.

Due to the aforementioned factors, the driver alert system industry is expected to exceed US$ 101 Bn by registering a staggering double digit of CAGR of 14% by the end of the assessment period.

The World Health Organization (WHO) has stated that nearly 1.3 million people succumb to road accidents annually. It further identifies that road injuries among leading causes of deaths among people aged between 5 and 29 years. Furthermore, road traffic crashes cost most countries 3% of their GDP. To prevent such losses, governments are enforcing strict regulations aimed at improving road safety.

The new-age sensor technology is being widely used in intelligent transportation systems including various driver alert systems such as weather alert, road safety alert, driver fatigue alert, and others.

It is used in steering pattern monitoring, driver eye/face monitoring, and vehicle position monitoring in order to prevent accidents due to drunk driving, road hazards, driver fatigue, and others all over the world.

At present, Asia is leading the global market. Rising demand for premium and luxury vehicles coupled with the increasing production of automated vehicles in China and India is enabling growth in the Asian market for driver alert systems.

Furthermore, growth is being fuelled by the rising popularity of autonomous vehicles. For instance, in India, numerous start-ups are emerging which offer these vehicles. Thus, according to Fact.MR, the region will sustain its dominance by accumulating more than 45% of market share through the forecast period.

Why is the Demand for Driver Alert Systems Increasing in Europe?

The presence of well-developed manufacturing units and rapidly expanding automotive sector has helped Europe emerge as the second-leading market for driver alert system in the world. Continuous research and development for safety while driving is playing a crucial role for the development of driver alert systems.

Surging demand in countries such as the U.K, Italy, and others is enabling growth in the region. Thus, according to Fact.MR, Europe is expected to possess more than 35% of market share in the assessment period.

North America is the third-leading market. The presence of advanced automotive infrastructure and adoption of digital advancements have resulted in expansion of the North America driver alert systems market. In addition, the government of the region is emphasizing on safety measure while driving.

The demand for passenger and electric vehicles witnessed in countries such as U.S, Canada, and others is aiding to the growth of North America market. This, in turn has affected the sales of driver alert systems positively. Thus, according to Fact.MR, the North America is expected to hold 40% of market share in the sales indicator period.

Sensors are capable of detecting various environmental conditions, starting from temperature to road conditions, which are crucial part of generating timely alert. According to Fact.MR, sensors are expected to remain dominant by accumulating more than 40% market share followed by cameras and other components during the forecast period.

How is Steering and Seat Vibration Gaining Traction?

According to Fact.MR, steering and seat vibration alert is presently dominant in terms of alert followed by sound alerts and others. A CAGR of 12% is anticipated for this segment in the long-run forecast period.

This type of alert system is mainly used in the steering wheel and seat. In this system, steering wheel produces vibration in order to notify the driver, when a lane change is detected without indication. In the same way the seats can generate vibrations to alert the driver when the lanes are changed too slowly or there is drowsiness or fatigue in the driver.

Why are Passenger Vehicles Key Beneficiaries of Driver Alert Systems?

The market for driver alert system is a highly competitive one. Market players are therefore adopting various strategies to gain competitive edge. Some of them are focusing on product launches to gain traction.

How much is the driver alert system industry worth?

As of 2020, the market for driver alert system reached nearly US$ 27 Bn

At what rate will the driver alert system industry grow from 2021-2031?

How much is the driver alert system market like to be valued by 2031?

What was the last 5 years CAGR for the market?

What are the key trends driving driver alert system sales?

How much is the Asian driver alert systems industry worth?

The driver alert system industry is expected to hold market value around 45% throughout Asia.

How much is the North America driver alert systems industry worth?

How much is the Europe driver alert systems industry worth?

Which is the dominant driver alert system component?