Marine Oil Market: About the Report

Demand for marine oil is generally higher than its supply, and therefore, producers have started to implement strategies to reduce volatility. These initiatives include increasing the usage of algae for production to reduce dependence on wild catch fish, as well as focus on aquaculture. Fact.MR’s report explains in detail that while EMEA and South Asia & Pacific have a strong foothold in the global marine oil market, East Asia is the region where the most lucrative opportunities will be offered for stakeholders. Across the world, refined marine oil is finding more takers, thereby aiding market expansion.

Currently, there has been significant rise in aquaculture activities across the globe, thereby increasing demand for marine oil. Use of marine oil at the industrial level is pacing up, as end-use companies are utilizing this oil on different fronts, such as for pharmaceuticals, cosmetics, pet food, and several other uses. Growing demand for healthy food products such as marine oil as a cooking oil, and also as a topping oil for many dishes, since it is one of the best source of long chain fatty acids, will be one of the factors that is fuelling the expansion of the global marine oil market size.

These regions have both, backward and forward integration in the marine oil market space, which makes them key regions on a global level. Other regions such as East Asia and North America also have a sizeable market share.

These regions witness considerably high consumption of marine oil since they have potential end-use sectors when compared to other regions such as Latin America.

Latin America is not a large producer of marine oil; end-use industries in the region are not much established, which results in a slightly low growth rate. The marine oil market in East Asia is expected to deliver the highest growth rate of more than 4% over the forecast period. 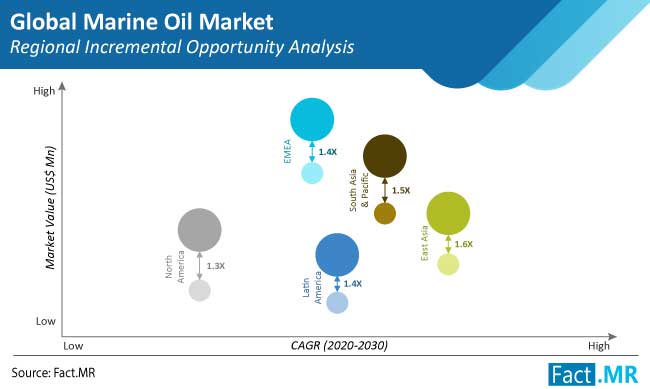 The global marine oil market is moderately competitive in nature, where, tier-1 players make more than half of the global revenue.

Companies operating at the global level, such as China Fishery Group and Nissui Group, have considerably high marine oil market shares. Regional companies also have a strong foothold in their respective regions.

Due to high entry barriers and considerably low success ratio in the marine oil market, companies are generally wary before investing in this space. However, algae oil, which is in an introductory phase, has attracted the attention of several producers who are scaling up their production. 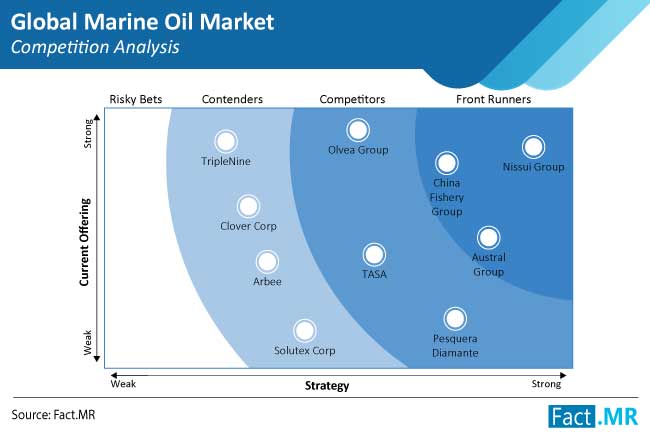 Companies operating in the marine oil market can optimize their production to reduce costs through backward integration, to make up for the volatility in prices. Raw material procurement, which is still inconsistent, gives rise to a huge demand-supply gap at the global level. Procurement sources for extracting marine oil should be categorized in an organised manner, since climatic events and government regulations can make procurement strenuous.

Additionally, production of marine oil was also affected due to restricted supply of raw materials. However, the marine oil market is expected to gradually come into shape when effects of the pandemic are lessened.

Organic Honey Market to surpass valuation of US$ 150 million by the end of 2022. Sales of clover hon...

Citrate Ester Market to witness steady growth by 2029. The increasing demand for different packed be...