The latest study by Fact.MR foretells the global suspended scaffolding market to record an expansion rate of around 5.3% and a valuation of over US$ 16 Bn by the end of forecast period. 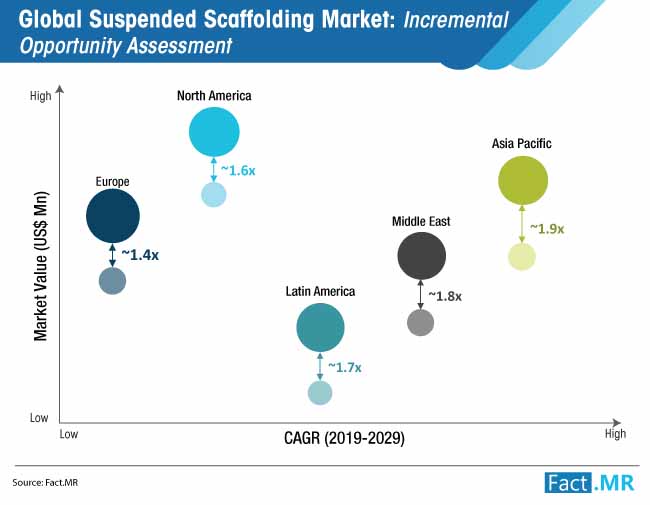 In addition, the use of suspended scaffolding in maintenance, construction, painting, and repair of bridges will also bolster the growth of the market over the forecast period.

For instance, suspended scaffolding is used extensively for cleaning and replacement of glass panels in skyscrapers. Asia Pacific and North America will maintain their hegemony in the suspended scaffolding market during the forecast period. Together they will witness a combined incremental opportunity of more than US$ 4 Bn from 2019 to 2029.

These scaffoldings will receive an uptick on their ability to dramatically increase the productivity of suspended scaffolding, enhance their transportation efficiency and reduce installation time.

Two point suspended scaffoldings will see a steady growth trajectory and will continue to be the most preferred by end users owing to benefits such as cost efficiency and easy installation.

Moreover, less stringent regulations, ease of availability of cost-effective labor and presence of numerous unorganized industry participants is another factor driving the suspended scaffolding market in this region.

Safety and Compatibility takes Centre Stage as Regulations Step Up

Demand for products with safety and compatibility features is the core essence of the suspended scaffolding market. To prevent the increasing number of workstation accidents, the OSHA (Occupational Safety and Health Administration) has laid down various regulations to deploy safety equipment workstations. 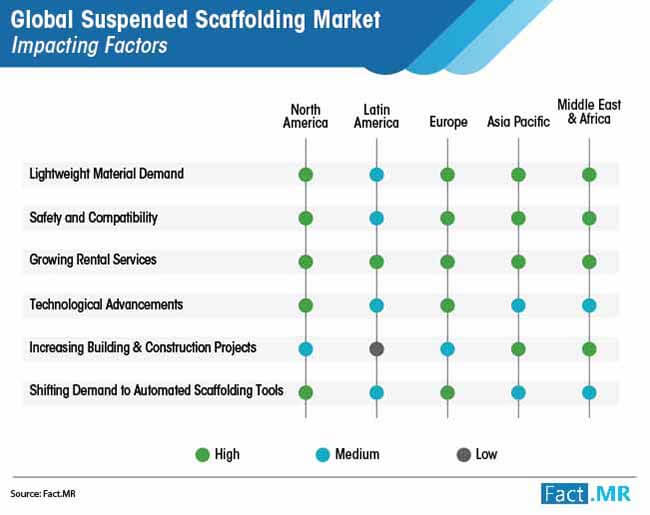 This is a significant bottleneck in the expansion plans of global suspended scaffolding manufacturers in emerging economies.

Prominent Players are currently holding a market share of 6% to 8% characterized by a diverse product portfolio for multiple applications.

Continuous innovations related to safety of workers and products with enhanced shelf life, are creating lucrative opportunities for manufacturers.

Companies are striving for sustainability within the suspended scaffolding market. In addition, new industry players are concentrating specifically on the incorporation of more sophisticated processing techniques that are not only economical but also ensure maximum safety.

The global suspended scaffolding market is segmented on the basis of product, material, end-use and region.

Country-specific assessment on demand for suspended scaffolding has been provided for each regional market, along with the market size valuation and forecast price point assessment, price index and impact analysis of key regional and country-wise dynamics, which were obtained through quotes from numerous suspended scaffolding manufacturers, experts, and suppliers. Y-o-Y growth projections have also been offered on all regional markets incorporated in the report. Moreover, future trends, growth prospects, and other possibilities related to the market have been answered in the report.

Global suspended scaffolding market to record an expansion rate of around 5.3% Over The Forecast Period

Demand for products with safety and compatibility features is the core essence of the suspended scaffolding market.

*96 figures and 64 tables includes by FactMR