Breast mammography has gained popularity as the standard diagnostic screening tool in the women’s healthcare, aiding detection and intervention of breast cancers in early stages.

Prevalence of breast cancer has been increasing significantly over the past few years.

The American Cancer Society recorded over 245,000 new cases of breast cancer in 2016 in the U.S. Despite immense research, mammography alone is not effective for all populations of women, particularly in women having dense breast tissues. 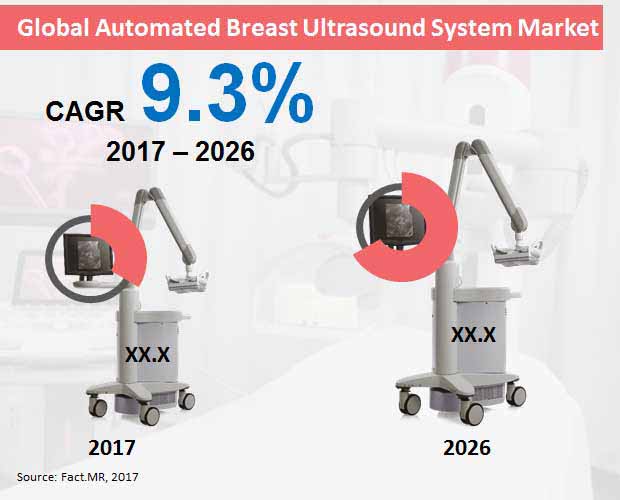 Ultrasound has gained traction as more portable and less expensive diagnostic imaging tool, as compared to CT and MRI.

However, several limitations are associated with the technology such as lengthy test durations, dependence on skill & expertise of operator. In a bid to resolve these concerns, prominent companies such as SonoCine, U-Systems, Inc., and Siemens Healthcare, have developed automated breast ultrasound system (ABUS), which utilizes high-frequency sound waves to provide the physicians with 3D volumetric image.

Such 3D images are more beneficial for women with dense breast tissues, as they enable radiologists to examine the breast cancers from various angles and deliver a better interpretation.

Moreover, the operator dependency is drastically reduced, as transducer employed in ABUS scans the breast automatically.

Increased sensitivity of the FDA-approved ABUS, nearly 97%, when utilized in conjunction with mammography illustrates this technology’s lucrativeness as a screening tool for women with dense breast tissues.

However, certain areas of ABUS are required to be addressed prior to its future developments by companies and market penetration, as the technology is relatively new.

One such are directly relates to radiologists. Although ABUS curtails the requirement for a skilled operator, radiologists would now need formal training.

As the familiarity of radiologists with ABUS is not as similar as that with other imaging technologies, and as scans offered are volumetric 3D images, correct interpretation of these images will further entail the requirement for standardized training for radiologists.

These studies have shown significant improvements in invasive breast cancer diagnosis rate coupled with acceptable recall increase, when 3d ABUS was added to FFDSM in women having ACR3/ACR4 breast density.

3D ABUS has been deemed to be promising adjunct method to the FFDSM programs of high-volume screening centers.

Product innovation will continue to be a key strategy among the market players to gain a competitive edge.

At what rate did demand for Automated breast ultrasound system increase from 2017 to 2026?

Global Automated breast ultrasound system market to record a value CAGR of 9.3% over the period of forecast by 2027

Who are the key players in the Automated Breast Ultrasound System market?

Global ultrasound systems to grow at a CAGR around 6%, citing market valuation of US$ 8.5 billion in...