The global breast biopsy marker market has reached a valuation of US$ 798 million in 2022 and is predicted to expand at a healthy CAGR of 5.8% to end up with a market size of more than US$ 1.4 billion by 2032.

Sales of breast biopsy markers are directly reliant on the number of breast cancers and breast biopsies performed, in which South Asia and ASEAN is the leading market at present.

Globally, breast cancer is considered the most common invasive cancer among women. Breast biopsies are used for diagnosis and treatment planning purposes.

The availability of better biocompatible and affordable biopsy markers is driving several key players to manufacture titanium breast biopsy markers that will directly accelerate the growth of the market over the forecast period.

Fact.MR suggests that the global breast biopsy marker market will be valued at US$ 1.4 billion by 2032-end, expanding at a CAGR of 5.8% over the decade.

Between 2017 and 2021, the global breast biopsy marker market registered a CAGR of 5.4%, and according to Fact.MR, a market research and competitive intelligence provider, it is projected to expand at 5.8% CAGR between 2022 and 2032. 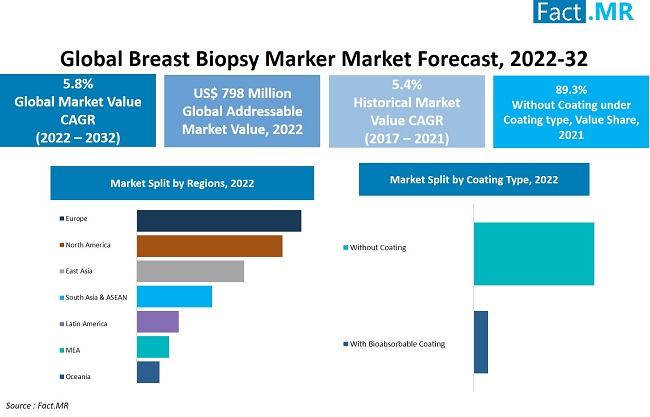 Market share analysis of breast biopsy markers based on coating type and region. Under the coating type segment, the without coating segment currently dominates with 89.3% market share.

Why is There Healthy Demand Growth for Breast Biopsy Markers?

Breast cancer is known to be amongst the most prevalent anomaly worldwide. According to the American Cancer Society, breast cancer is the second-leading cause of cancer-related deaths among the population. It was observed that, in the year 2018, over 265,000 new cases of breast cancer were detected among women and one in every eight women was likely to be diagnosed with breast carcinoma.

Breast biopsy markers are used in the biopsy process that offers the advantage of identifying and marking the biopsy area with a physical tag that helps the surgeon in the diagnosis and operating process. Therefore, a rise in the number of breast cancer patients across the world is likely to uplift the breast biopsy marker market in parallel.

To reduce global breast cancer deaths, which are rising due to late-stage diagnosis and inadequate access to quality care, various organizations and governments are introducing initiatives and healthcare programs with the idea of promoting an integrated approach towards breast cancers more broadly.

Timely diagnosis and supportive care during treatment help make a substantial progress through these initiatives. Regular check-ups for breast cancers are done by performing biopsies that make use of breast tissue markers for identification of the biopsy site.

Early investigation provided by such programs will boost the usage of breast tissue markers, which will ultimately drive market growth.

How Can Market Expansion Be Dented to Some Extent?

Breast biopsy markers are developed and distributed as per approvals from regulatory agencies such as the U.S. FDA and others. To obtain clearance for their products, manufacturers need to submit comprehensive clinical data that supports the safety and efficacy of the product on trial. These approval processes are usually lengthy and also involve a lot of investments, which directly affects the pricing of the product.

High cost of production also affects the final price of the product. Hence, financial toxicity that represents a considerable economic burden on breast biopsy patients acts as a restraining factor for market progress.

With this dramatic increase in breast cancer among the population, over the coming years, a majority of breast cancer patients worldwide would be of Asian origin.

Rising interest in R&D as well as the introduction of various awareness programs by breast cancer researchers across regions has the potential to accelerate advancements in the treatment of patients on a regional and global level.

For instance, in Malaysia, the proportion of stage III and stage IV breast cancer was considerably reduced due to the introduction of clinical breast examinations across rural as well as urban districts. With such initiatives for breast cancer screening, breast biopsy surgeries will increase, which will directly uplift the market for breast biopsy markers in the South Asia & ASEAN region.

Which Countries are Highly Lucrative Markets in Europe?

The European market accounted for 22.7% share of the global breast biopsy marker market at the end of 2021.

Europe enjoys modernization and digitalization of health systems and infrastructure, which presents a significant market opportunity for breast biopsy marker suppliers. Government initiatives and health insurance policies are anticipated to boost the market in the region, especially in the U.K. Germany, and Italy.

National and local taxes serve as the primary funding source, with copayments for prescription drugs and outpatient care as a complement. In general, every citizen is covered by the national healthcare system and there are free services from government-employed doctors, which creates a highly lucrative and affordable market for breast biopsy markers.

Which Material is Most Widely Used in Making Breast Biopsy Markers?

The breast biopsy marker, under material type, is categorized into metals & alloys and non-metals. Amongst them, titanium, a biocompatible material that comes under the metals & alloys segment, held a high market share of 31.4% in 2021 and is expected to exhibit a CAGR of 5.5% through 2032.

The market for titanium breast biopsy markers is seeing tremendous growth as a result of rising demand by the end users (hospitals, specialty clinics, ASCs, etc.) that perform breast biopsies on a large scale. Although many commercial markers made from other materials are available in the market, they are relatively expensive, which becomes a burden on the patients who are in need.

Thus titanium, a cheaper biocompatible alternative that is widely available, is most used by healthcare providers.

Why is Demand for Bioabsorbable Breast Biopsy Markers Surging?

Due to advancements in technologies to produce cost-effective biomarkers by using biodegradable materials, breast biopsy markers with bioabsorbable coatings are predicted to upscale the market over the coming years.

Use of bioabsorbable coating breast biopsy markers is projected to grow over the forecast period at a high CAGR of 7.2%.

What are the key statistics for the breast biopsy marker market?

At present, the global breast biopsy marker market is valued at US$ 798 million.

How is the market for breast biopsy markers expected to fare in the future?

Worldwide demand for breast biopsy markers is anticipated to reach cross US$ 1.4 billion by 2032-end.

Which regional market accounts for a high market share?

Which material is most preferred for manufacturing breast biopsy markers?

Pyrogallol market to observe steady growth from 2018-2028. The rise in demand for pharmaceutical pro...