Special effects laminate films have unique visual effects, metallic finish, and soft texture. These films are used for various applications such as printing, packaging, etc. As there is high on-shelf competition, therefore, there is need of packaging products that can differentiate the new launches from other products. Therefore, manufacturers are using special effects laminate films as a packaging material. The films are easily printable, tactile and have features that differentiate the product. So, special effect laminates films are preferred by the manufacturers to be used for different packaging applications such as cartons, boxes, books and others.

These special effects laminate films are UV coated, glued and stamped and have a better finish than other laminating films. Special effect laminate film has high durability and when used as a packaging material, it extends the shelf life of the product.  These films have scuff proof features.

Some of the key manufacturers are providing special effect laminate films with BOPP base. This base increases the level of hardness as well as eliminates the need for a coating with other material.

Manufacturers are using a combination of printable films and transparent over laminates to produce special effect laminates films. They are adding hologram film, metalized film, and base material together. So, the film provides glittering, metallic and holographic effect. Nobelus, a special effect laminate film producer is providing laminate film under the brand name “Karees”, that has tactile appearance, soft touch, and have protecting properties.

The pricing analysis of the special effects laminate films market is carried out on the basis of thickness type, segment of the film. The graph below shows the consumption of the laminates in year 2017, by region. 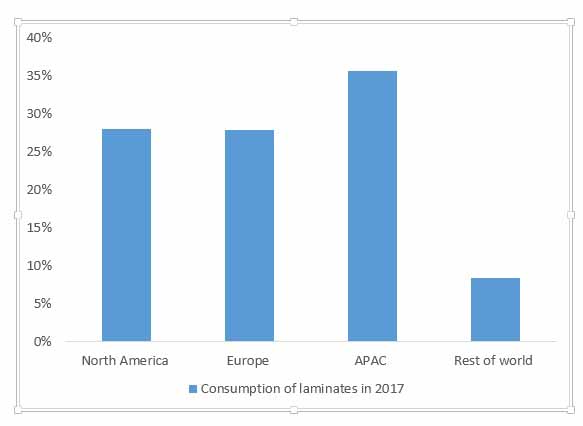 The global special effects laminate films market is segmented application type, by end use and by thickness.

On the basis of application type, special effects laminates films market is segmented into:

On the basis of end use, special effects laminates films market is segmented into:

On the basis of thickness, special effects laminates films market is segmented into:

72% of our present clientele are repeat buyers

Markets in over 150 countries analyzed granularly

35% of our total client base has an annual subscription membership

24x7 availability – we are always there when you need us

600+ passionate analysts striving to go above and beyond

1,000+ published and upcoming reports every year

100,000+ data points in our comprehensive database

Our analysts in Media