The global tilapia market currently enjoys a value of US$ 14.1 billion and is forecasted to reach a size of US$ 22.3 billion by the end of 2033. Global demand for tilapia fish is projected to increase at 4.6% CAGR over the next ten years.

Tilapia is a species of fish that has the ability to thrive and survive in difficult habitats, which has led to its widespread farming across the world. Tilapia aquaculture is also very cost-efficient and has the potential to generate sustainable profits for fish farmers. Advancements in technology and supportive initiatives to promote tilapia fish farming are also expected to benefit market development in the future.

Efforts to improve domestic production of tilapia fish, the rapid expansion of the aquaculture industry, increasing consumption of white fish, the growing popularity of the benefits associated with tilapia consumption, increasing focus on health and fitness, and rising demand for fish protein are other prospects that could decide tilapia sales in the future.

On the flip side, the vulnerability of tilapia fish to Tilapia Tilapinevirus or Tilapia lake virus and lack of awareness among fish farmers for the same could prove to be major restraining factors for the tilapia market evolution over the coming years. The invasive nature of tilapia fish species could also hamper overall market growth throughout the forecast period.

What Impact are New Tilapia Companies Having on the Market?

Incoming tilapia manufacturers are focusing on creating novel products and opting for innovative fishery services and solutions to boost output, have better supply chain management, and change the pricing trends in the global tilapia market landscape. 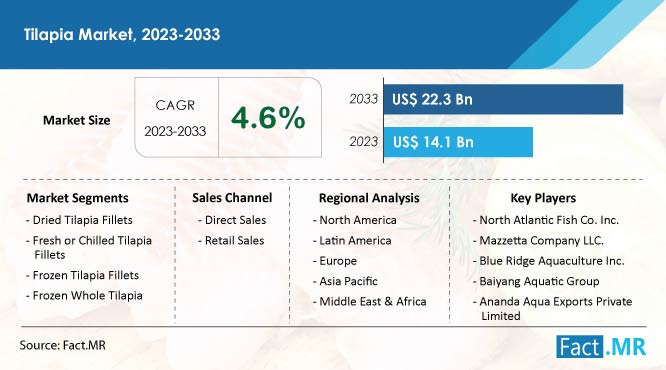 The APAC region accounts for nearly 70% of global tilapia production at present and this trend is expected to be rife throughout the forecast period. Growing establishment of new fish farms with high product standards, adoption of advanced aquaculture techniques and technologies, supportive government initiatives to boost domestic tilapia production, minimizing the environmental impact of processes, following safety guidelines, and implementation of regulatory guidelines to promote sustainable tilapia aquaculture are key prospects that are anticipated to boost tilapia demand in APAC through 2033.

The region is also home to China, which is the leading tilapia producer in the world, followed by Egypt. India and Indonesia are also anticipated to witness a notable hike in tilapia production over the coming years owing to supportive initiatives, better quality control, and advancements in fishery services. Fresh tilapia is anticipated to be a popular product in Asia Pacific over the coming years.

Why are Tilapia Vendors Swarming the United States?

“Growing Focus on Health and Rising Popularity of Fish as Protein”

In recent years, focus on health and fitness has bolstered in the U.S. owing to the growing prevalence of chronic diseases such as cardiovascular disorders. This increased focus on health has led to changes in the dietary choices of people in the country and subsequently resulted in high demand for different types of fish as a healthier protein alternative to red meat. Moreover, advancements in the fishing industry and the adoption of advanced aquaculture technologies are also projected to boost tilapia fish farming in the country.

Increasing awareness of white fish consumption benefits and the growing popularity of seafood-based cuisine are other prospects that are also expected to bolster the consumption of tilapia fish in the country going forward. Frozen tilapia is expected to be highly popular in the country owing to rising spending on frozen and ready-to-eat foods.

How Will Tilapia Demand Fare in Japan & Korea?

Japanese and Korean diets are heavily influenced by seafood since both of these countries have an abundant supply of seafood due to their geographic location. However, increasing urbanization and the influence of Western culture have resulted in reduced consumption of seafood in the aforementioned countries, which is expected to hurt tilapia sales in Japan and Korea across the forecast period.

Increasing efforts to promote seafood consumption and the growing popularity of benefits associated with white fish consumption are expected to create opportunities for tilapia manufacturers in Japan and Korea over the next ten years through 2033.

Is Investing in European Countries a Smart Move for Tilapia Suppliers?

Growing prevalence of chronic diseases and lifestyle disorders has promoted the demand for healthy food alternatives in several European countries in recent years. Consumers in Europe are opting for healthy fish meat to safeguard them from the adverse effects of red meat and poultry meat consumption. High incidence of cardiovascular disorders, changing dietary preferences, increasing popularity of Chinese cuisine, growing availability of fresh tilapia fish, and increasing spending on seafood are other factors that are projected to govern shipments of tilapia in the European region across the forecast period.

Germany, France, the United Kingdom, and Spain are anticipated to be some of the lucrative markets for tilapia manufacturers and vendors in this region over the next ten years. Nile tilapia is anticipated to be the most popular species of tilapia fish in Europe throughout the forecast period. Organic tilapia, parmesan-crusted frozen tilapia, and frozen breaded tilapia are other tilapia fish products that are slated to witness a hike in demand through 2033.

Which Species of Tilapia Will Be Popular Going Forward?

“Nile Tilapia to Account for High Demand in Future”

Based on species, the market for tilapia is segmented into Nile tilapia, Blue tilapia, Mozambique tilapia, and Wami tilapia.

At present, Nile tilapia is the most widely consumed species of tilapia across the world. This species is primarily found in the Latin American, African, and Middle Eastern parts of the world. Nile tilapia is preferred by a large number of people owing to its high advantages for farming from technique as well as ecological standpoints. In ponds, Nile tilapia is capable of feeding on Phyto-plankton and requires very less maintenance, which makes it a perfect low-cost aquaculture alternative for farmers around the world. Demand for Nile tilapia fish is anticipated to evolve at 4% CAGR over the next ten years.

Key tilapia suppliers are focusing on expanding their business potential by acquiring new capital and launching new initiatives to meet the increasing demand for tilapia fish.

Consumption of tilapia is slated to reach a market revenue of US$ 22.3 billion by 2033-end.

*94 figures and 48 tables includes by FactMR