Growing adoption of motorcycles as a cost-effective private transport has been widespread over the past decade. Motorcycle market projects a steady growth rate of 3.5% CAGR through 2021-2031.

While advancements in the automotive sector have fuelled sales substantially, macro-economic factors such as increase in disposable income and rising urban population are further boosting the sales of motorcycle across regions.

A new study by Fact.MR provides a holistic overview of the global motorcycle market, along with new trends, growth drivers, restraining factors, and demand-supply trajectories across the globe, with focus on lucrative regions such as Asia Pacific, Europe, and North America.

Increase in requirement of motorcycles for various purposes such as adventure, sports, daily transport, and others has bolstered demand over the past decade. Due to having better gas mileage and customization options such as Bluetooth speaker systems, unique horns, bucket seats, and others, motorcycles have taken prominence in the buying lists of a broad range of consumers.

As a result, manufacturers have experienced rise in demand during the last 5 years from 2016 to 2020.

While technical advancements have enabled motorcycle manufacturers to equip them with more sophisticated components, sky-high demand from sports enthusiasts, college goers, various professionals, travelers, and others is significantly spurring the growth of manufacturers.

According to Fact.MR, the global motorcycle market will experience even higher growth throughout the forecast period from 2021 to 2031.

How is Demand Rising for Various Types of Motorcycles?

Rise in demand for motorcycles has enabled manufacturers to come up with a wider variety in order to widen their growth scope. According to a report published by the MotorCycles Data on 30th December 2020, the United States motorcycles industry in 2020 has been pumped up by the ATV/RUV segment, which reported huge growth. As per its report, increase in requirement has resulted in over 4% growth in production in the U.S. in 2020.

As stated in a report published by the European Commission (EC), various precautionary measures are being taken by motorcycle manufacturers in order to prevent road accidents of motorcyclists.

For instance, as part of its commitment to the European Road Safety Charter, Honda has pledged to increase the installation of advanced braking systems. This, in turn, is aiding the rise in demand for motorcycles across regions.

Are Technical Advancements Working in Favour of Motorcycle Manufacturers?

With the incorporation of cutting-edge technologies, motorcycles have become more sophisticated in terms of safety, luxury, and comfort. For instance, the invention of anti-lock braking systems (ABS), which is gaining popularity among manufacturers, is indirectly fuelling sales. ABS uses inertial measurement (IMU) data, along with ABS and throttle control, in order to keep the bike stable in tight turns and emergency situations.

Modern motorcycles are often equipped with slipper clutches, which are designed to partially disengage when the rear wheel tries to drive the engine faster than it would run under its own power. Originally developed for high-performance super-sport bikes and track-only machines, slipper clutches have more widespread application now.

What are the Key Challenges Faced by Motorcycle Manufacturers?

While motorcycles are gaining rapid traction owing to their several advantages, increased risk of road accidents for motorcyclists often works as a restraining factor for the market.

According to the European Commission (EC), approximately 80% of motorcyclists killed on European roads sustained head impacts, and in half of these cases, head injury was the most serious.

As stated in its report, motorcycle use is the most dangerous mode of road travel, while more than 6,500 motorized two-wheeler users die each year in the EU (15), and the risk of death for motorcyclists is 20 times that of car occupants.

Various initiatives and campaigns to spread awareness regarding the use of helmets and taking other precautionary measures are expected to help manufacturers in overcoming such restraints.

Also, adoption of modern safety features in motorcycles are anticipated to lower such risks. 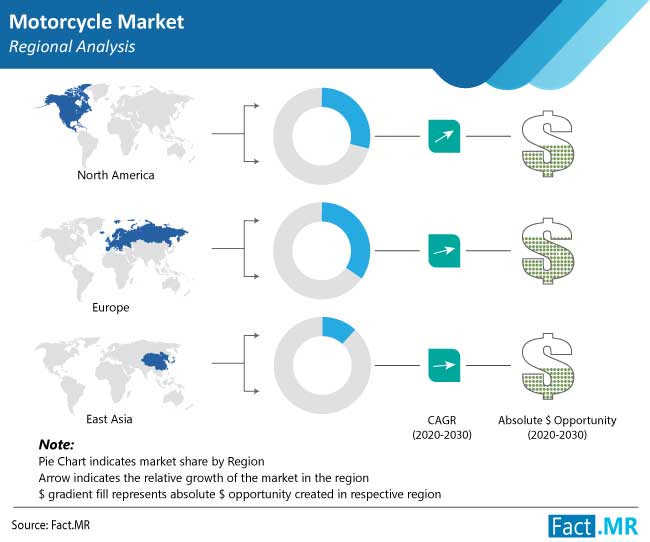 What Makes Germany a Lucrative Market for Motorcycle Manufacturers?

According to a report published by the MotorCycles Data in January, 2021, the German motorcycle industry, in 2020, was one of the fastest-growing in the world.

As per its report, the German motorcycle industry grew 50.6% in the third quarter, 46.9% in October, and 98.1% in November, to end the year with 309.1% growth. This depicts the high potential of Germany worth exploring by motorcycle manufacturers.

Why is the United States Motorcycle Market in the Spotlight?

The United States, being the epicenter of the world’s third-largest motorcycle market, North America, is in the focus of manufacturers. High demand for a wide variety of motorcycles such as cruisers, standard, touring, and others is propelling growth in the United States.

According to a report titled “Motorcycle Trends in the United States”, published by the Bureau of Transportation Statistics on 21st May 2017, motorcycle registrations in the United States have grown each of the past 10 years, from 3,826,373 in 1997 to 6,678,958 in 2006 - a 75% overall increase, and have been growing at even higher rates since then, except a slight decline in 2007 and 2020. This data indicate ample of opportunities awaiting motorcycle manufacturers in the country.

Why is India a Heavyweight for Motorcycle Manufactures?

India, being the main country of the world’s largest motorcycle market, Asia Pacific, is in the limelight for stakeholders.

According to a report published by the MotorCycles Data on 4th January 2021, despite reporting the deepest loss ever with 14.8 million sales (-23.3%) in 2020, Q4 sales recovery was strong in India, ending with December up a huge 32%, while rural area resilience pushed up Indian manufacturers’ market share.

With India recovering from COVID-19 fast, sales are expected to increase in the coming years, making it a main contributor to the exponential growth of the Asia Pacific motorcycle market.

Why are Motorcycle Manufacturers Eyeing China?

China is another key region in the Asia Pacific market, and is expected to sustain its position throughout the forecast period.

As per a report published by the MotorCycles Data on 29th December 2020, the Chinese motorcycle industry witnesses 1.6 million sales per year.

Furthermore, on 29th October, China’s top leadership finalized a blueprint of the 14th Five-Year Plan (2021-2025) and unveiled its “Vision 2035” program, which intends to catapult China to a “moderately developed economy” status in 15 years. This, in turn, is expected to spur growth of motorcycle manufacturers further in the near future.

Which Motorcycle Type is Leading the Market?

Presently, cruisers is the leading segment in terms of motorcycle type. Cruisers are beginner-friendly, stylish, and equipped with advanced audio and motorcycle accessories, making those highly preferred by various consumers.

Other key segments fuelling the sales of manufacturers are adventure, mopeds, sports, standard, and touring.

Currently, motorcycles with engine capacity 501-800 CC are dominating the market in terms of engine capacity. Being cost-effective while capable of providing required mileage, this segment is mostly preferred by motorcycle manufacturers.

The global motorcycle market is fragmented and thriving on key players. In order to excel in this landscape, key market players are focusing on launching a wider variety of vehicles. For instance,

Which are the top companies operating in the motorcycle market?

Some of the top companies competing in the global motorcycle market are Eicher Motors Limited, TVS Motor Company Limited, Harley Davidson Motor Company Inc., and others.

Which are some of the lucrative markets for motorcycles?

The United States, India, China, Germany, the United Kingdom, Japan, and a few others are lucrative markets for motorcycles.

Which is the highly sought-after segment in terms of type of motorcycle?

Presently, cruisers are the mostly sought-after in terms of type of motorcycle in this market space.

Which engine capacity is mostly preferred by motorcycle manufacturers?

Currently, motorcycles with engine capacity 501-800 CC are mostly preferred by manufacturers, as they a

APAC Boom Trucks Market to create an absolute dollar opportunity of over US$ 150 Mn with global Boom...

Global undercarriage components market is expected to account nearly US$ 6.5 Billion and is projecte...