Sales of pillar to pillar displays accounted for around 1% share of the global automotive display market at the end of 2021.

Research and development for these displays began in mid-2016 for LG, when the engineering team started looking for potential ways to integrate continuous and singular touchscreen displays into luxury vehicle cockpits. Through primary input and continuous research and innovation, the concept of pillar to pillar displays was finalized for prototyping.

The emerging technology of the OLED display market in smartphones and other smart gadgets has gained significant penetration. Now, OLED display manufacturers are channelizing their focus towards automotive displays.

Automotive displays have evolved over the years, projecting innovation, smart device integration, and robust offerings. The market is currently in the embryonic stage of development, as P2P displays are not commercialized. Yet, the technology is gaining high traction among luxury car brands. 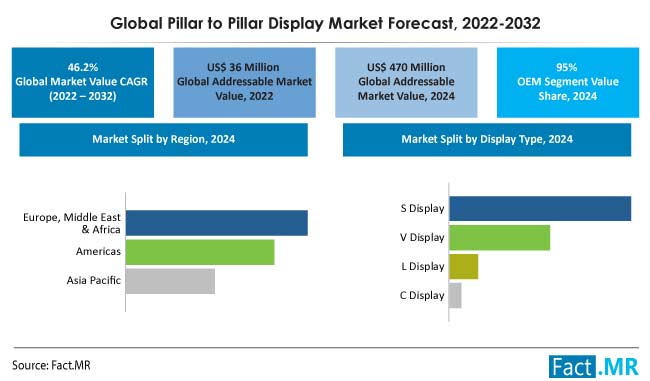 Automakers are marking the opportunity for integrating innovation through their EV segment, which entails significant developments across matured geography. EVs would be the first choice of preference for automakers for the installation of pillar to pillar displays. Thereby, exponential growth of the electric vehicle market will provide the stage for P2P suppliers, owing to which, the segment will create an absolute dollar opportunity of US$ 1.62 billion over the forecast period.

In 2021, there were around 56.3 million units of passenger vehicles sold across the globe, wherein, close to 10% penetration was captured by the luxury car segment. The integration of pillar to pillar displays is estimated to have higher penetration across luxury vehicles as customers would be willing to pay more dollars for such advancements in automotive display systems.

Due to the complex manufacturing process involved in pillar to pillar displays, the product in itself makes it expensive, which is not easily affordable by mass consumers in the market. Owing to this, the luxury cars segment would be one of the leading vehicle types marking its position for pillar to pillar display installation.

Increasing Automotive Sales in the U.S. Will Drive Demand for P2P Displays

As auto infotainment systems have already captured significant market share in the U.S automobile market, the emergence of P2P displays would be a stepping stone for automakers to leverage and generate ample revenue opportunities.

Germany is renowned around the world for its strong engineering in the automotive sector. German automobiles are highly preferred across Asia and the Americas. Innovation, dependability, safety, and design attributes make Germany the global top producer in the automotive industry.

As the maturity of the German automotive industry enables room for innovation, pillar to pillar display is one such technology. The Germany P2P display market is expected to capture nearly 45% of the European market share by the end of 2032.

Market Growth to Be Led by OEM Sales for P2P Displays

Leading manufacturers of pillar to pillar displays are focusing only on OEMs as their sales channel during the initial launches of their products.

For example, LG collaborated with Mercedes, while Continental has decided to integrate its offerings with leading automakers. During the short term, OEM sales would account for nearly 95% of the market share by 2024-end.

OEMs will dominate the market for P2P displays as these products would have exponential growth after mass production, which would be witnessed post-2024. OEM sales channel growth is projected to leap at 220.4% CAGR from 2022 to 2024, and then expand at 17.4% CAGR during the period of 2025-2032.

The scenario will change post-product adoption and reorganization across end users, wherein companies would provide patent services to vendors for the mass manufacturing of P2P displays, which would have the aftermarket as their sales channel. All in all, the integration of sales channels from automakers for the integration of pillar to pillar displays into their new and existing fleets would create huge opportunities for revenue generation.

Automotive S Display Type Expected to Be Most Widely Deployed

Automotive displays have become vital elements of vehicles and are getting more technologically-advanced year on year. It is estimated that there would be more than 350 million automotive display shipments across the globe by 2025. Segments such as center stack displays, rear seat displays, and primary head-up displays will be the top-performing segments in terms of revenue generation.

Fact.MR has provided detailed information about the price points of key manufacturers of pillar to pillar displays positioned across regions, sales growth, production capacity, and speculative technological expansion, in the recently published report.

The global pillar to pillar display market stands at a valuation of US$ 36 million in 2022.

*41 figures and 24 tables includes by FactMR